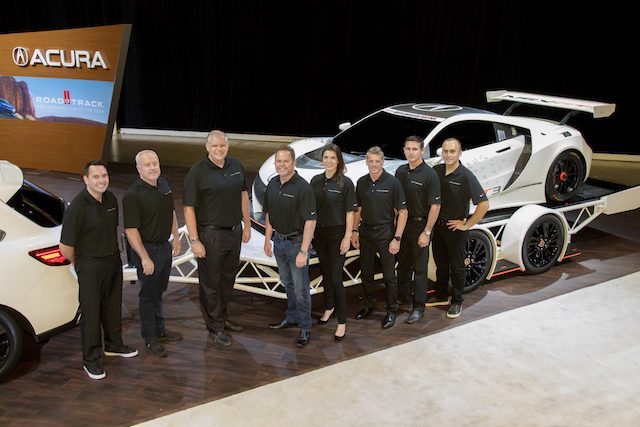 Each team will field a pair of new Acura NSX GT3 race cars. The NSX GT3 will make its race debut in the Rolex 24 at Daytona International Speedway in January.

“It was an arduous selection process, but we’re extraordinarily pleased with the dynamic and experienced driver lineup which will launch our 2017 Acura Motorsports program with the new NSX GT3,” said Art St. Cyr, president of Honda Performance Development.

“We believe we’ve assembled a group of drivers who have the skill and experience to take the Acura NSX GT3 to Victory Circle, and who will proudly represent the performance DNA of the Acura brand for our many fans.”

The drivers, along with team owners Michael Shank and Peter Cunningham and St. Cyr, will be available for a meet-and-greet from 12:30 – 1:30 p.m. Tuesday, November 1. The Acura display is located at booth 24877, in the Central Hall.

Lally, 41, is a three-time Grand-Am class champion, with more than 30 career sports car racing victories. He is a five-time class winner of the Rolex 24, most recently winning GTD at 2016 Daytona International Speedway.

Legge, 36, is a two-time Indianapolis 500 starter, most recently driving at The Brickyard for Schmidt Peterson Motorsports in 2013.

Negri has anchored the MSR driver lineup since joining the team in 2004, scoring podium finishes each season and five career victories, including the 2012 Rolex 24 and the 2016 season-ending Petit Le Mans at Road Atlanta, which secured the North American Endurance Championship manufacturers’ title for Honda.

The 52-year-old native Brazilian makes his home in Miami.

The 31-year-old Miami-based driver has a dozen North American sports car class victories to his credit, winning the Grand-Am GT championship title in both 2010 and 2012.

Operating for the past two seasons as a customer team fielding a Honda-powered Ligier chassis in IMSA’s prototype division, Michael Shank Racing has been a consistent front-runner in the headline category of the WeatherTech SportsCar Championship, with two race wins and four podium finishes this season.

The Columbus, Ohio-based operation will run a pair of Acura NSX GT3s in the GTD class of the endurance racing series.

Returning for his third season with RealTime Racing and Acura, the 33-year-old Eversley recorded three Pirelli World Challenge GT race victories driving an Acura TLX GT for RealTime in 2015-16, including a race weekend sweep of the two PWC GT events at Road America in June.

The Georgia native has also been a multiple race winner driving a variety of Honda Civic Si’s in the Continental Tire SportsCar Challenge.

The Dutch driver has a long history with various European Honda Racing programs, including three years in the British and European Touring Car championships from 1998-2000.

He is a previous class winner at Le Mans, in 2003, and was part of the winning lineup at the 24 Hours of Brno in the Czech Republic earlier this month.

Long-time Acura Motorsports partner RealTime Racing will again contest the Pirelli World Challenge, switching to the new NSX GT3 from the Acura TLX GT, which the Wisconsin-based team drove to three victories during the past two seasons.

RealTime has a long history of success in racing a wide range of Acura and Honda products, including 88 World Challenge race victories and 14 championships since 1993.

The NSX GT3 utilizes the production NSX’s ultra-rigid and lightweight multi-material body with aluminum-intensive space frame, which is produced at the Performance Manufacturing Center in Ohio, the exclusive worldwide manufacturing facility for the NSXi.

The racing powerplant uses the same design specifications as the the production 2017 Acura NSX, including the block, heads, valve train, crankshaft, pistons and dry-sump lubrication system.

The engine is paired with a 6-speed, sequential-shift racing gearbox, delivering power to the rear wheels.

The Acura NSX GT3 will add to a rich legacy of Acura sports car racing campaigns and championships, including the 1991, 1992 and 1993 IMSA Camel Lights manufacturer and driver championships, and the 2009 American Le Mans Series manufacturer, driver and team championships in both the LMP1 and LMP2 classes.