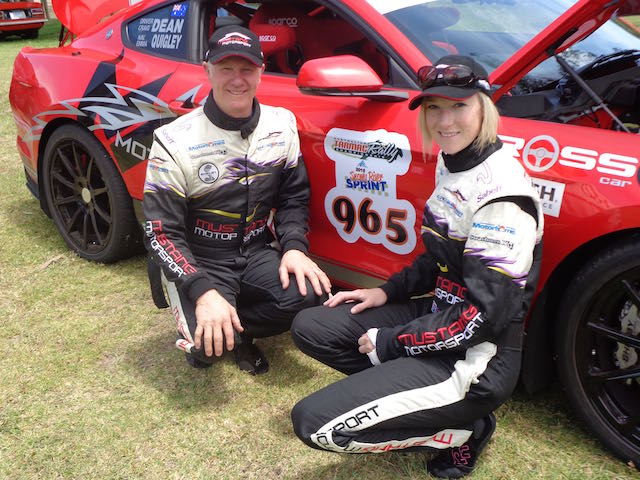 MEDIA RELEASE: It will be a case of taking the Mustang to the mountain when defending tarmac rally champion Craig Dean heads for Victoria’s Mt Baw Baw next month.

Dean is lining up for the Mt Baw Baw Sprint (February 20-21), one of four events that make up the Australian Tarmac Rally Championship. Competitors can choose to do the entire series, or contest the individual events which best suit their budget and schedule. Trophies are available at both levels.

For Dean, co-driver Emma Quigley and their 2015 Shelby GT Mustang, there is no choice to be made: they want to defend their 2015 outright title, so they will tackle all four events.

Throwing down the gauntlet to his rivals, Dean says he’s happy with the development of the car and is coming into the series very confident.

“We did a lot of work on the car in the lead-up to the final round (Snowy River Sprint) last year and during the event itself and it just kept getting better and better,” says Dean, who owns Australia’s official Shelby agent and conversion specialist, Mustang Motorsport.

“For Mt Baw Baw, we’ve done some minor tweaks to the springs and suspension and we’ll see how we go. It’s a hard run, that event. It’s not a high-speed rally like some of the others in the series and the car will be working very hard on the run to the summit.

“To be honest, it’s probably an event that suits the smaller high-powered 4WD cars better, especially if it’s wet, but I am very confident with the car – and I’m hoping, hoping, hoping, that it will be dry!”

With 2014 champion Danny Traverso taking time out to focus on his family and business, Dean has one rival out of the picture, but he says there are several others who will give him a run for his money.

“Barrie Smith (Canberra) is always quick no matter what he drives, and Tim Hendy (Queensland), too, if his Skyline is working well. Adam Kaplan (Sydney) is like Barrie – he’s always fast so it will be interesting to see what he is entering.

“I’m not expecting anything else than plenty of solid, fast competition, because all the events are like that. It’s part of the reason I love doing them, but it’s also great that when the racing stops, we have so much fun too.”

The 2015 classic title winner, Laurie Burton, has already announced he’s returning to defend his crown in 2016, as have various class winners, so organising team, Mountain Motorsports, is expecting a strong showing for the first event, which utilises the access road from Icy Creek to the top of Mt Baw Baw, 120km east of Melbourne.

The event is broken up into a series of individual special stages run both up and down the road for a total of 220km of competition. The final stage is a 30km ‘blast’ over the full distance of the road to the village. The road is closed to the public during competition.

The other events which make up the ATRC calendar are Lake Mountain Sprint (May 28-29), Snowy River Sprint (September 24-25) and the Great Tarmac Rally (December 10-11).

Mountain Motorsports has run more than 40 tarmac rallies and touring road events since 1995. Entry to the Australian Tarmac Rally Championship can be for the full series or as single events, and is open to all comers with three categories of entry available: full competition, touring and regularity, and entries are still available for Mt Baw Baw and the other events.