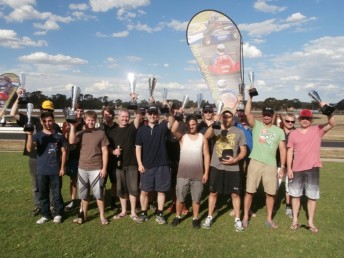 The 2014 AASA Australian Superkart Nationals were held over the weekend of November 29 & 30 hosted by the Victorian Superkart club this year at the Winton Motor racing circuit near Benalla in Victoria.

The series being only in it’s third year having first been held at the Queensland raceway in 2012 and last year at Wakefield park.

A good quality field of Superkarts from five classes entered in what was to be a test of machine and driver with ambient temperatures of around 30 deg and a track temp of over 60 deg.

Despite the heat all classes provided the closest, cleanest, fastest racing that could hope to be seen anywhere.

And in long track Superkarting the speed is there. Drivers gave each other room, no one was punted off and there we’re no reports from drivers about driving standards.

Although our officials from Racesafe had a different view and dealt with matters professionally.

Highlights of the meeting by class were, Matt Bass in the 250 Internationals drove extremely well after taking a break due to some health issues recently and not having much seat time in a new BRC powered kart.

Matt has come through the ranks starting out in the Non gearbox Juniors, stepping up to success in the 125cc gearbox class and now making his mark in the 250 twin.

In the 125cc Gearbox class it was the current 125 CAMS Champion who took home the prize with determination over well season campaigner Gary Pegoraro, and not to be sneezed at was the fantastic effort of South Australian Fracesco Maiolo in taking out third with only his second time in the seat.

Stock Honda is a new class to Superkarting and is gaining popularity due to its ease of use and low maintenance.

The meeting was dominated by Dalton Rowell (NSW) who has had an amazing year in Superkarting taking on all before him.

The Non gearbox (Rotax) class was where the action was in both the light and heavy class it was side pod to side pod through the esses at Winton at well over 130 KPH with everyone taking a deep breath to see who would not emerge from the other side.

For those not too certain about Rotax in sprint, now is the time to look at Superkarting in your state.

The winner in non gearbox light was Tim Clarke who like Matt Bass started in Juniors and took the win by only two points ahead of Johnathon French from South Australia.

In the heavies it was close as well with Brandon Stillwell from (SA) taking a win away from Jamie MacDonald who was doing a double stint having his first race in Stock Honda also. Given the heat Jamie did a great job of taking home second.

The 2015 AASA Australian Superkart Nationals looks like returning to Queensland in November next year at this stage.

The Victorian Superkart club wish to thank the Winton Motor Raceway for being fantastic in making this event work for all of us.

The Australian Auto-sport Alliance (AASA) for listening, understanding and helping. This is the start of something big.

Racesafe for providing all the “official” parts we needed and for doing it so well.

And a special thank you to our sponsors for believing in our event and investing in our sport and passion.

And the winners are:

There was insufficient numbers for the 250 Nationals or Non Gearbox Junior to qualify for a “National” event.