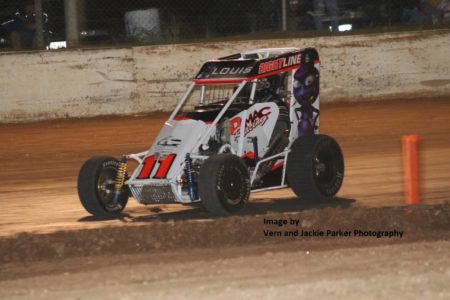 The event has attracted the defending Victorian Champion Rodriguez and Australia’s number one driver Mark Heaton amongst a strong nomination list. Justin Paull a recent winner in the Title and our winner last Saturday night at Redline is also in the field as is our recent Legends Trophy winner Ash Booker.

Not since the 2000/01 season has the Title been held at Rosedale and this weekend thirteen competitors are set to scorch around the big speedway in our 1000 to 1400cc powered purpose-built race machines. Amongst out line-up will be three entrants making the trek from New South Wales and the Victorian committee thank those drivers very much. Nathan O’Brien, Mark Heaton and Shaun Robinson.

The Victorian Compact Speedcar Title has a long history and since 1986/87 a long list of names that read like a whose who of Speedway have won the coveted Championship. This weekend either Justin Paull or Louis Rodriguez will win for a second time or any of the other eleven competitors will win it for the first time and become part of this wonderful history.

Some of the greats of the sport have won the Victorian Title starting with Ray ‘Noddy’ Bishop in 1987. Noddy Bishop went on to win multiple Titles in our big brother class the Speedcars. Warren Wright of NSW the following season was our winner, Gordon Cardwell at least five times, Brian Cardwell at least twice, Peter Robotham four times, Travis “Squizzy’ Mills, Danny Stainer an insane seven times in succession from 2006 to 2012 and since then seven first and only time winners, Ian Jones, Robbie Gordon, Rob Eyeington of NSW, Wayne Corbett of Queensland, Justin Paull who is competing this Saturday, Rod Francis of NSW and Louis Rodriguez who is hopeful of going back to back at this event.

Mark Hutchinson is last season’s A Grade Champion for the Victorian Club, Butch Hutchinson has a car set up recently by Ash Booker and looked very competitive last Saturday night with two heat wins in Ballarat, Nathan O’Brien won the B Grade NSW Championship last season and finished second overall in the NSW Club Championship, Tania Hallett has finished on the last two podiums in Victoria and is firing and Jack Day returns to Compact racing from the Speedcar division he has been competing in this season.

Along with our major sponsors the Victorian Compact Speedcar Club have organised contingency sponsorship and support from the following businesses with the support listed beside them.

Racing begins at 4pm on Saturday at Rosedale and the Victorian Compact Speedcar Club encourages all our past and present supporters and competitors to return to watch a great nights racing.