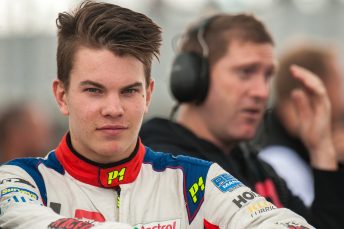 Sixteen year old Supercars driver Alex Rullo, has been added to the long list of notable sporting Trinitarians, who were former students of Perth’s Trinity College.

Rullo broke the record as the youngest ever driver in the Virgin Australia Supercars Championship at 16 years of age with Lucas Dumbrell Motorsport (LDM) in the 2017 season.

Coined as ‘the young gun’ Rullo an accomplished racer, having finished runner-up in the WA State Karting Championships in 2014 and winning the WA Hyundai Excel Championship that same year. In 2015, Rullo stepped up to the V8 Touring Car series, taking home second in the Championship and earning the Rookie of the Year Award.

The then 14 year old Rullo caught the attention of long term LDM team sponsor Repair Management Australia’s Phil Munday in June 2015, when he stunned the motor racing industry by becoming the youngest ever to win a national CAMS circuit racing event, at Winton Motor Raceway. Munday notified Supercars team-owner Lucas Dumbrell, who quickly signed the teen to LDM, and then competed in the 2016 Dunlop Series.

“Age is no barrier to the team, I am the youngest team owner with the youngest driver and team in pit lane, we are building for the future whilst giving opportunities to young and up-coming guys and girls” said Dumbrell.

Rullo is not the only Trinitarian to become involved in Supercars and also part of the team at LDM. Jayden Marciano who works alongside Rullo on car #62 as one of the team’s Data Engineers also attended the prestigious boys college.

“I attended Trinity College in Perth from year 4 to year 12 and loved it. I did a lot of the design and technology type units and the facilities I got to use hands-on in their technology centre like lathes and laser cutters really boosted my interest in wanting to become an engineer.” said Marciano.

“From there I went on to do a mechanical engineering degree at Uni whilst also having a big involvement in the formula SAE team there as I always wanted to end up in engineering in Motorsport. I was looking for ways to get into Motorsport and get more experience and the opportunity came up of helping out in the V8 ute series which then lead to getting the opportunity as a Data Engineer with LDM in Supercars at the start of 2016. I met Alex that year as he was with LDM in the Dunlop series and found out then that he also went to Trinity which was pretty cool. Now this year it’s been pretty awesome to be able to work with Alex as his Data Engineer. Making sure the data acquisition systems on the car are working correctly so we are getting the information to help us make the car better for him over a race weekend, and going through that data to help him find areas to progress as a driver also. ” said Marciano.

“Trinity have been both supportive and understanding, helping me juggle both my school and sporting commitments.” said Rullo.

“There is a lot of preparation involved in running a race car team that most fans don’t get to see, so it’s great to have another West Australian let alone a Trinity College boy on my Team. I can’t wait to get out in front of our home crowd in Perth.” said Rullo.

Rullo will be racing at the Virgin Australia Supercars Perth SuperSprint May 5-7 at Barbagallo Raceway.