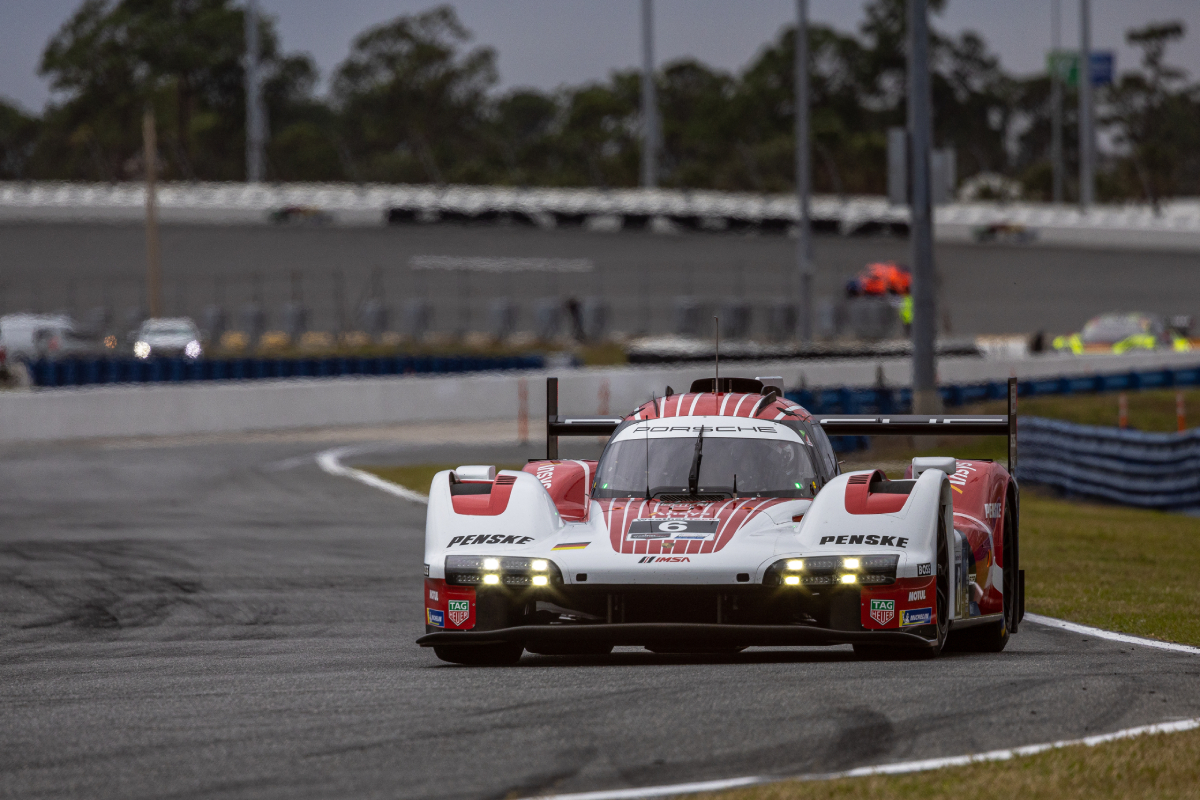 The #6 Porsche topped a rain-affected Session 5 in Daytona

A rain-affected Session 5 in Daytona left the Porsche of Nick Tandy the first non-Acura driver to top a session in this year’s Roar Before The 24.

The session’s best time was more than 10 seconds slower than that managed by Colin Braun in Session 4 earlier in the day.

That was a result of the wet conditions, with only 27 cars recording a time making it unrepresentative ahead of Sunday’s qualifying sessions.

Instead, Session 4 offered better insight, with the #60 Meyer Shank Cadillac fastest once again.

Helio Castroneves had topped Session 2 on Friday with the car after Braun was fastest in Session 1. In the hands of Thomas Blomqvist it was fastest again in Session 3 on Saturday.

Trailing the #60 in both outings was the #10 Konica Minolta Acura, driven by Brendon Hartley in Session 4 and Louis Deletraz earlier in the day.

Just over a tenth split the top two on both occasions, with Porsche and BMW sharing boasting rights in third – Tandy in Saturday’s first session and Philipp Eng in the second.

With Practice 5 effective a washout, the fastest LMP2 time came in Session 4 courtesy of the #04 Crowdstrike Racing Oreca of Ben Hanley.

The Englishman’s best was two-tenths fastest than the best LMP2 lap in Session 4, set by Nicolas Lapierre in the #52 Oreca.

Scott McLaughlin’s #8 Oreca was third best in class in Session 4 having been only eighth best in the preceding outing.

Australian Josh Burdon was fourth fastest in LMP3 in Session 3, improving one spot later on.

Honours in GTD Pro were claimed by the #64 Aston Martin Vantage in both meaningful sessions, though were slower than the leading GTD runner on both occasions.

Magnus Racing was again the fastest of the GT runners in the #44 Aston Martin in Session 4, while the #70 Inception Racing McLaren topped Session 3.

The earlier session had been briefly halted when the LMP2 #55 Proton Competition entry stopped on track with a puncture while Session 4 ran without interruption.

The Roar Before The 24 continues in Daytona on Sunday with Qualifying beginning at 13:25 local time.

The outcome of those sessions will determine the grid for next weekend’s Rolex 24.