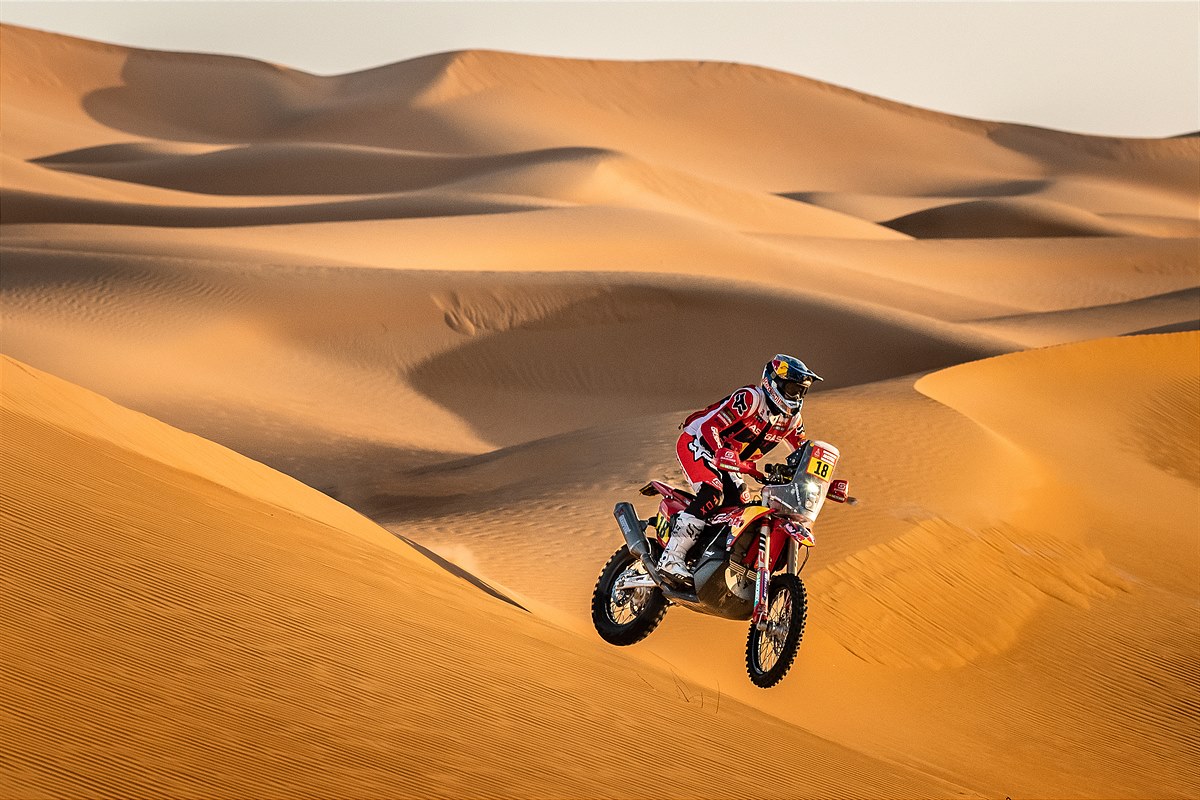 Daniel Sanders gave up time on Stage 13 which helped compatriot Toby Price pick up crucial seconds which could prove decisive in today’s conclusion to a knife edge Dakar Rally.

The Bikes race is the tightest in history after Kevin Benavides cut Price’s overall lead to just 12 seconds with one stage to go, having been the recipient of a 23:10s time credit for stopping to their injured KTM team-mate, Matthias Walkner.

However, Benavides could have jumped clear of the Australian altogether given how quickly he finished the 154km special between Shaybah and Al-Hofuf.

Price started third on the road by virtue of Stage 12 results but caught the two riders ahead of him, Jose Ignacio Cornejo Florimo and Sanders, around 90km into the special.

It was then that Sanders let the #8 KTM entry through so that Price could maximise his bonus seconds for being among the top three on the road.

With bonuses issued at a rate of 1.5s/km for the road opener, 1s/km for second, and 0.5s/km for third in the order, handing over track position for the 40km between the penultimate waypoint and the finish line amounts to 20 seconds.

Not only would that be the difference between leading the rally and dropping to second place in the overall classification, it also constitutes a major advantage for the final stage.

Price will head off last of the riders, three minutes behind Benavides, given the start list is the reversal of the overall classification, and hence will have the benefit of a visual of his key rival.

As for Sanders, who is a stablemate of the KTM riders given he is entered by Red Bull GasGas Factory Racing, he was classified 11th for the day and remains seventh overall, 4:05s behind Luciano Benavides (Husqvarna Factory Racing).

“It was a pretty tricky but enjoyable day up front today,” said Sanders.

“The dunes were really soft which made it hard to maintain a fast pace while trying to navigate, and between the waypoints there were some big gaps, which added to the difficulty.

“But I pushed on the best I could to not lose too much time and I think I did a pretty good job.

“There were definitely a few close calls out there but that’s all part of the fun of riding through the dunes.”

Kevin Benavides is due to start the final special stage of Dakar 2023 this evening at 17:18 AEDT.