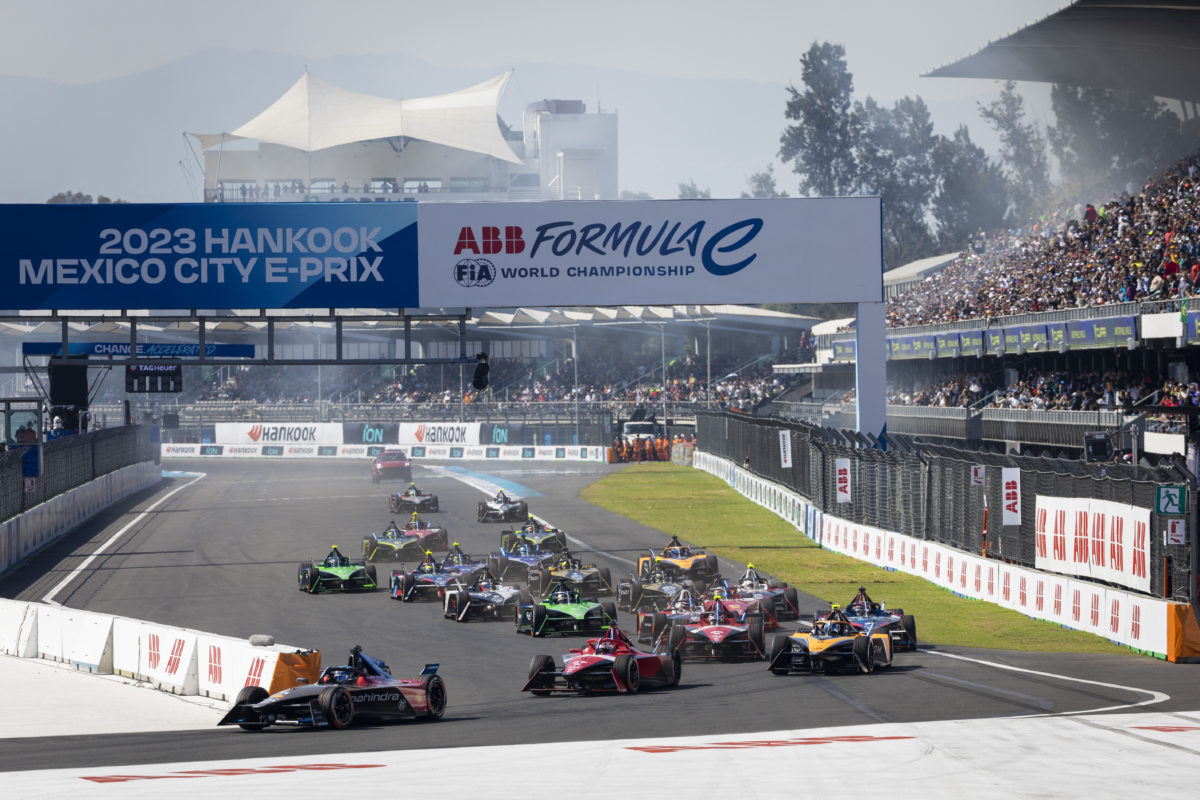 The Briton nabbed the lead when Mahindra’s Lucas Di Grassi made a minor error on Lap 12, before the front-runners had started to take Attack Mode, and was not headed thereafter at the Autodromo Hermanos Rodriguez.

Porsche’s Pascal Wehrlein made his way from sixth on the grid to second place when the chequered flag flew after 36 laps plus five for Safety Cars, with a desperate Di Grassi holding off Jake Hughes in the battle for the final podium position.

Hughes even missed out on fourth position in the end, the McLaren driver losing out to Andre Lotterer in the other Andretti entry on the final lap.

In the championship, Dennis’s 7.816s victory and a fastest lap bonus gives him an eight-point lead over Wehrlein at this early stage of the campaign.

At the start, Hughes had made a good launch from the second row but remained third, behind pole-sitter Di Grassi and Dennis but ahead of Lotterer.

A Safety Car was called just as the field completed Lap 1, with Robin Frijns (Abt Cupra) off at the Turn 9/Turn 10/Turn 11 chicane complex after rear-ending Norman Nato (Nissan).

The restart came on Lap 6, with Wehrlein quickly overtaking Dan Ticktum (NIO) for fifth position in what was less than a lap of green flag running before the contest was neutralised again.

The reason was Sam Bird stopping on the side of the track with a reported driveshaft problem for his Jaguar, with the second restart taking place on Lap 10.

Dennis pounced on Lap 12 when Di Grassi dropped a wheel off at Turn 2 could not shut the door in time at Turn 3, while Ticktum had to peel off from sixth due to a drive-through penalty for an overpower breach.

A lap later, Dennis took his first minute of Attack Mode, retaining the lead despite the wider line through the stadium section.

Hughes and Lotterer did likewise from third and fourth on Lap 15, at which point they were split by Wehrlein, who was coming to the end of a two-minute activation.

Di Grassi triggered a one-minute Attack Mode activation on Lap 16, but was still over three seconds behind Dennis once he completed it.

Most of that gap was wiped out when another Safety Car was called on Lap 18 after Edoardo Mortara spun his Maserati MSG entry into the wall at Turn 1.

Di Grassi was 0.7s to the good when he took the Lap 21 restart and stretched the gap beyond two seconds on Lap 25, a moment before Wehrlein and Lotterer opted for their second and final helping of a total of four minutes of Attack Mode per driver.

On Lap 26, Di Grassi and Hughes took their final three minutes of Attack Mode, at which point Wehrlein stole third place from the latter.

Dennis was well clear when he kicked off his latter Attack Mode period on Lap 27, and led a top five which remained him, Di Grassi, Wehrlein, Hughes, and Lotterer once the cycle shook out.

Di Grassi was about three percent down on energy relative to the two drivers just behind, and lost second place on Lap 29 when Wehrlein outbraked him at Turn 9.

The Brazilian then came under pressure from Hughes, although the McLaren driver almost had his pocket picked by Lotterer at the Turn 5/Turn 6 hairpin when he tried to get by.

Sebastien Buemi (Envision) caught that trio on the first extra lap of the race, before sizeable local yellow zone for a stricken Rene Rast (McLaren) and associated debris gave Di Grassi something of a reprieve.

However, the yellows were withdrawn before they arrived on the scene for the final lap, allowing Lotterer to fire down the inside of Hughes at Turn 9.

Buemi finished sixth after he came under presser from Antonio Felix da Costa (Porsche) in what became a five-way fight for the final podium position, with the top 10 rounded out by Mitch Evans (Jaguar), Nick Cassidy (Envision), and Stoffel Vandoorne (DS Penske).