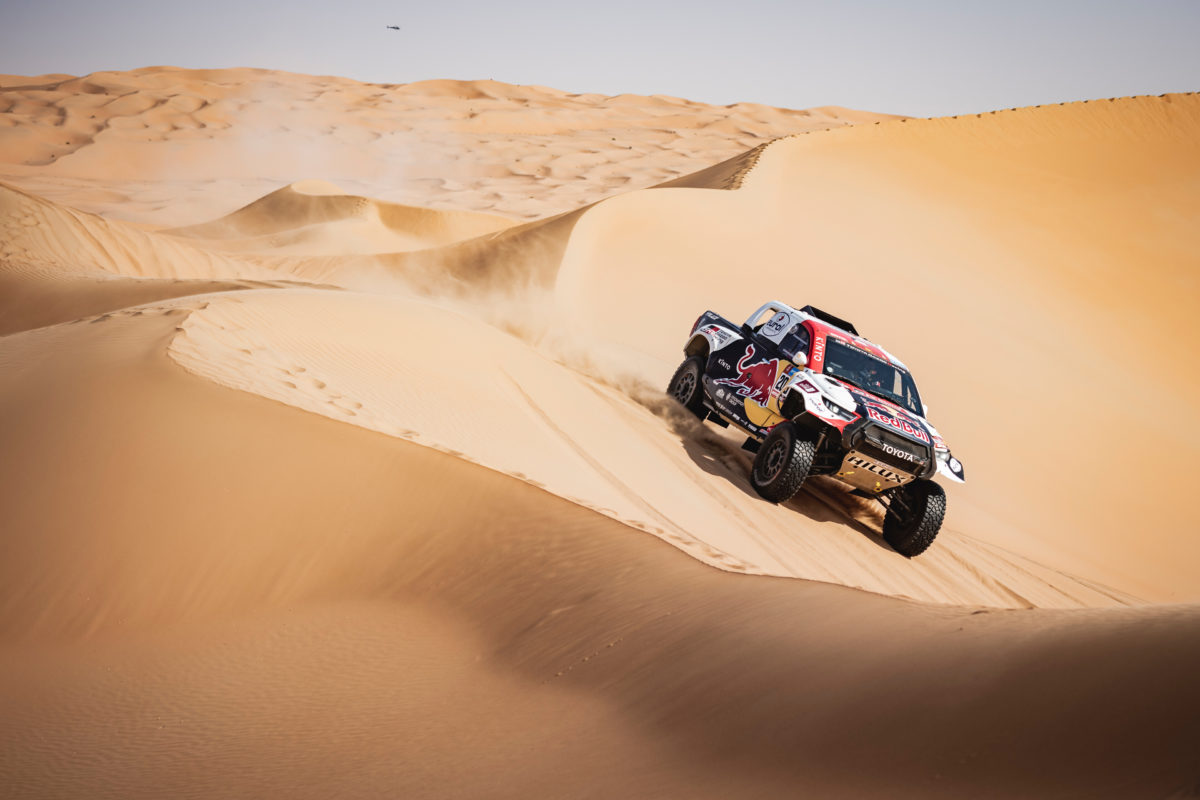 Toyota’s Nasser Al-Attiyah has won the Dakar Rally for a fifth time as Prodrive Hunter driver Guerlain Chicherit prevailed on the final stage of the 2023 event.

Fellow Hunter pilot Sebastien Loeb had emerged as Al-Attiyah’s nearest rival after the Team Audi Sport trio dropped out of contention, if not the rally altogether, due to various dramas.

However, Loeb was not immune either, and the Frenchman’s record six straight stage wins were not enough to get him much closer than 90 minutes in arrears of the #200 Toyota Gazoo Racing Hilux.

In the end, Al-Attiyah and his navigator Mathieu Baumel have won by 1:18:49s over the nine-time World Rally Champion, making for two Dakar crowns in as many years.

Loeb, who once again contest the rally with Bahrain Raid Xtreme, is the odd one out in an overall top five otherwise filled with Toyota Hiluxes.

Lucas Moraes has finished on the Dakar podium in an Overdrive Racing entry, nearly 18 minutes behind Loen in the end but almost an hour ahead of factory drivers Giniel De Villiers and Henk Lategan.

The final day saw competitors embark on a sandy, 136km special from Al-Hofuf to Dammam and it would take a disaster for Al-Attiyah to miss out on glory given his overnight lead was 1:21:42s even after cruising for days.

Chicherit, who had won Stage 3 but was by then several hours back after a string of punctures one day prior to that, edged Sebastian Halpern (X-Raid Mini JCW) to the quickest time to Kilometre 33.

The Frenchman was still 40-plus seconds to the good by the time Mattias Ekstrom had moved his Audi RS Q e-tron into second, and more than doubled the gap to 1:36s in the last 34km to the finish line.

As it stands, Chicherit is set to claim 10th overall while Ekstrom’s second place on the final stage leaves him 13th, pending later finishers.

Lategan finished third for the stage, from Halpern and Jakub Przygonski (X-Raid Mini JCW), with Loeb sixth but only gaining 53 seconds on Al-Attiyah, who was eighth on the day.

Mathieu Serradori was ninth overall at the start of Stage 14, but his Century CR6-T struck engine trouble just 10km in.