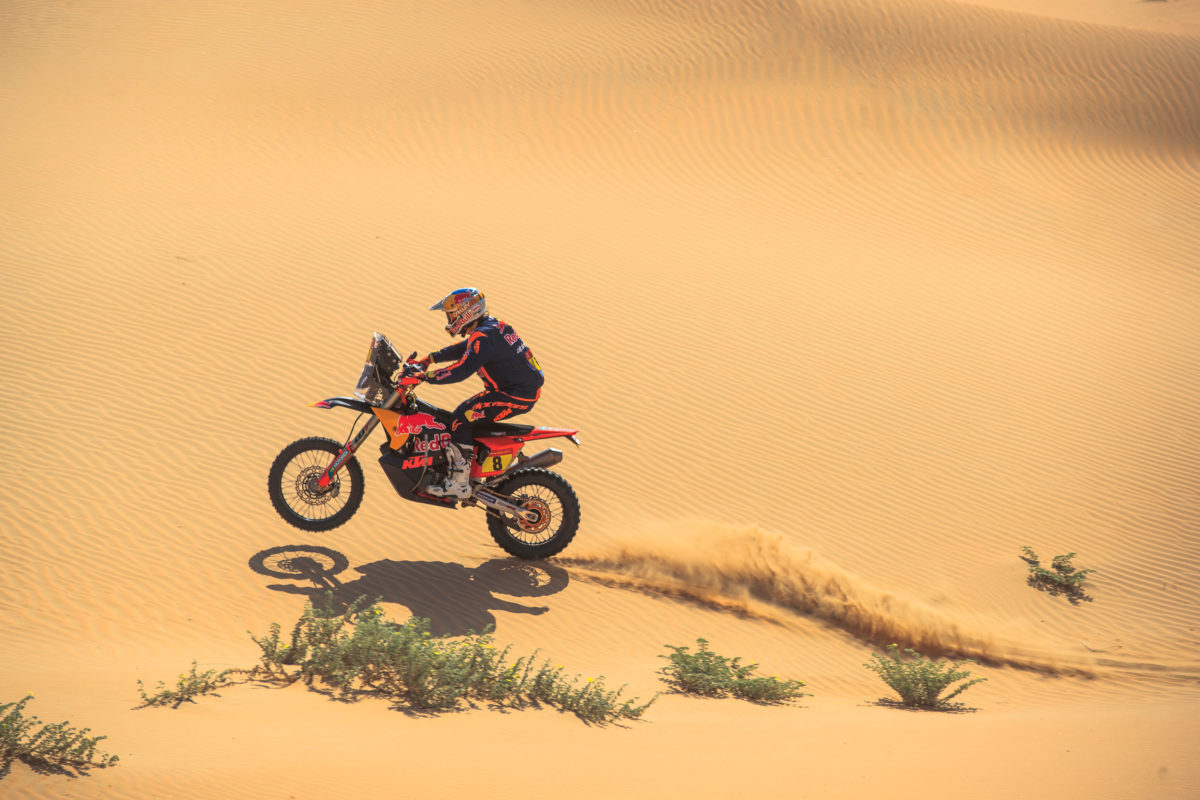 Toby Price will take a 12-second lead into the final day of Dakar 2023 after Kevin Benavides was credited more than 20 minutes for assisting their injured KTM team-mate.

Uncertainty surrounded just how much of a margin which the two-time Dakar champion held given Benavides had stopped and waited with Matthias Walkner when the Austrian crashed 55km into the 154km special on Stage 13.

As predicted, a time credit of 23:10s has now been issued, giving the Argentine the win on the dune-heavy Shaybah to Al-Hofuf stage and moving him up to second in the overall classification.

Price had started the day 28 seconds up, with Skyler Howes the best of the rest, but the Husqvarna rider is now third at 1:31s in arrears.

Kevin Benavides was 46 seconds off the pace while Price was edging Howes by 10 seconds at that point, thanks to 15 seconds’ worth of opener bonus.

The picture became clouded at the Kilometre 87 waypoint given Kevin Benavides was among the first on the scene when Walkner crashed.

The 2018 champion was conscious when the medical team arrived, but suffering from back pain, and his hopes of an overall top 10 in Dakar 2023 have been dashed.

What was certain was that Docherty was continuing to set the pace and Price had stretched his margin over Howes as they ran around the cusp of the top five.

Luciano Benavides (Husqvarna Factory Racing), however, started to close in on top spot in the next 36km, and turned a 17-second deficit relative to Docherty at Kilometre 114 into what was provisionally a 30-second win.

However, Luciano Benavides was then handed a one-minute penalty for speeding, meaning he had lost to the South African by 30 seconds, with the question of his brother Kevin’s stage time to still be resolved.

Price was fifth-quickest at 2:28s off the pace of the Argentine on Bike #47, but two positions and 1:03s up on Howes, meaning KTM can be extremely confident that either of two of its riders will be crowned a Dakar champion again tomorrow.

If not one of those KTM riders, then sister marque Husqvarna’s Howes would be almost certain to prevail given Van Beveren is fourth overall at 15:51s behind Price and Monster Energy Honda’s Pablo Quintanilla fifth at eight seconds further back.

Mason Klein (BAS World KTM), who impressed in the first week when he led the event in his debut in the Rally GP class, did not take the start of Stage 13 due to pain which has accrued since his two crashes on Stage 9.

Tomorrow, riders will set off in reverse order, meaning Price has the benefit of being able to follow Benavides towards Dammam, on Saudi Arabia’s east coast.

The 417km journey includes a fast, 136km beach special, meaning it will be a sprint to the finish of Dakar 2023.