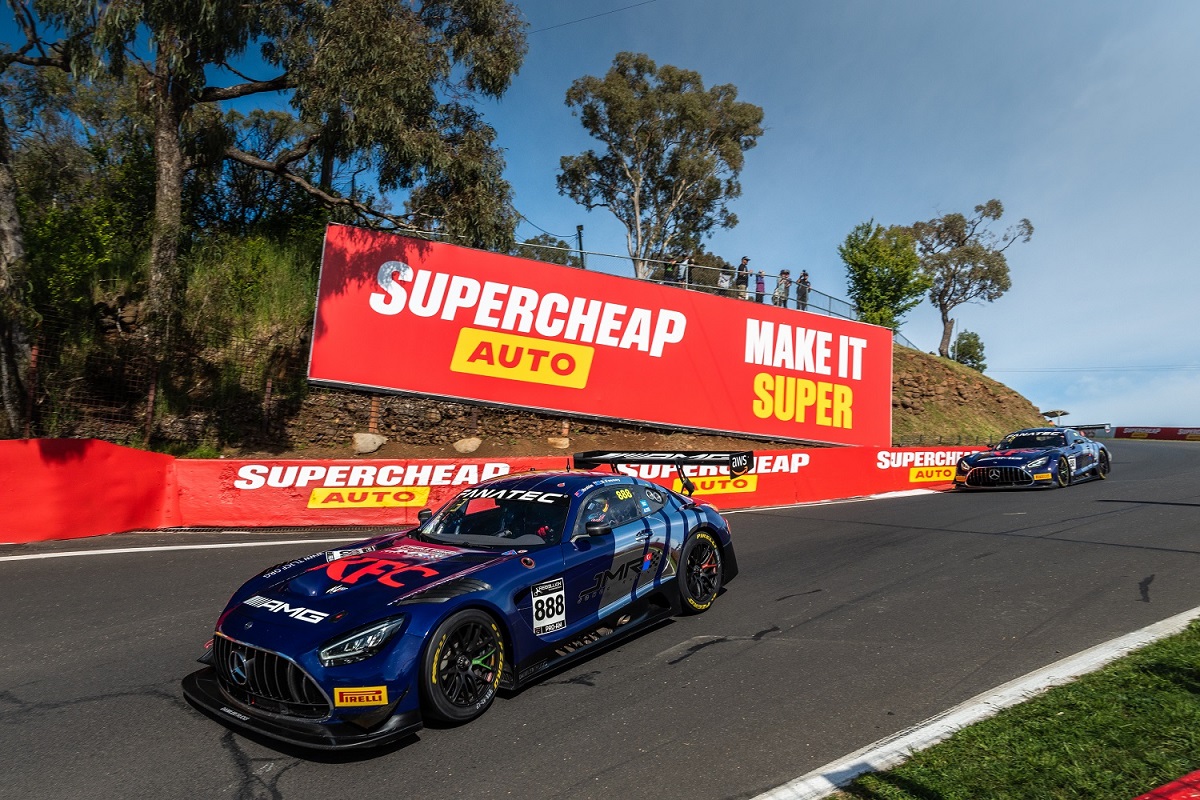 A 28-strong entry list for the 2023 Liqui Moly Bathurst 12 Hour has been revealed, including a second Triple Eight Race Engineering car.

In the first ‘normal’ Bathurst 12 Hour since the outbreak of COVID-19, a total of 22 GT3s have been entered, with the balance of vehicles in the Invited class.

That figure of 22 includes eight all-Pro driver cars, of which Triple Eight’s Supercheap Auto Racing effort is one of them, with Shane van Gisbergen, Broc Feeney, and Mercedes-AMG factory driver Maximilian Gotz to be behind the wheel.

However, the release of the entry list shows that the Banyo-based squad will also compete in Pro-Am, which was the top class when Triple Eight scored victory last year, running the SunEnergy1 car.

Jamie Whincup is a Platinum-ranked driver according to current FIA categorisation and Nick Foster is Gold, while Abu Bakar Ibrahim is Silver and Jefri Ibrahim is Bronze.

Any combination involving Jefri Ibrahim and two of the other three drivers would therefore be allowed in Pro-Am, although a Whincup/Ibrahim/Ibrahim trio seems likely.

Also intriguing is that the SunEnergy1 Mercedes-AMG has been entered in the Pro class this time around, despite solar magnate Kenny Habul being a Bronze-ranked driver.

The Mercedes-AMG GT3 is the most common car in the field, with a total of nine on the entry list and four in the Pro class, the others being the Gruppe M Racing and Craft-Bamboo Racing cars.

Also in the Pro class are an Audi R8 LMS GT3 evo II entered under the banner of the Melbourne Performance Centre which often represents the factory at Mount Panorama, the two Team WRT-run BMW M4 GT3s including that which will feature MotoGP champion Valentino Rossi, and the Manthey EMA Porsche 911 GT3 R.

The Pro-Am class is comprised of three Audis, three Mercedes-AMGs, and two Porsches.

Of the Audis, the PremiAir Racing-run effort is entered as ‘Schumacher Motorsport Fuchs Racing’ and will presumably include Brad Schumacher himself as driver, with the Bathurst local having shared one of his cars with new-for-2023 PremiAir Supercars steerer Tim Slade before.

Another is entered under MPC’s name, and the Hallmarc car which is set to be driven by Michael Caruso, Marc Cini, and at least one other is normally an MPC-run effort also. Both Pro-Am Porsches come out of ‘EBM Giga Racing’ although one is known to be the Grove Racing car which will include Anton De Pasquale, while the Scott Taylor Motorsport Mercedes-AMG quartet is already confirmed as being comprised of Craig Lowndes, Scott Taylor himself, Alex Davison, and Geoff Emery.

Volante Rosso Motorsport is running in both Pro-Am and the six-car Silver class with Mercedes-AMGs, with Harrolds Managing Director Ross Poulakis set to drive in the latter.

Valmont Racing’s participation and drivers of a Mercedes-AMG had already been announced, as had Wall Racing’s with the sole Lamborghini in the field.

The balance of the Silver class (Total of three Silver and/or Bronze drivers, or up to two Silver drivers and balance Bronze if four drivers in total) is three more Audis, including a ‘Supabarn’ car which points to the presence of James and/or Theo Koundouris.

Also of note is that the Invitational contingent includes three vehicles which one would have expected to be in fully competitive classes.

The Our Kloud Porsche 991 GT3 Cup Gen II machine would fall into Class B and the two GT4-spec vehicles, namely the Mark Griffith (Nineteen Corporation) Mercedes-AMG and an MMotorsport KTM X-Bow, into Class C per Issue 1 of the event Sporting and Technical Regulations.

All cars in the Invitational class are subject to a minimum lap time of 2:06s, with penalties applicable in each session for breaches of that threshold.

No cars have been entered in the GT3 Bronze class, the creation of which was announced on December 15.

The 28-car total and 22-car GT3 figure is an uptick on 20 and 15 respectively for the 2022 Bathurst 12 Hour, the first since Australia’s borders reopened, which was held on an unusual May date.

The 2023 Bathurst 12 Hour will take place on the event’s now customary weekend of the first Sunday of February, specifically February 3-5.