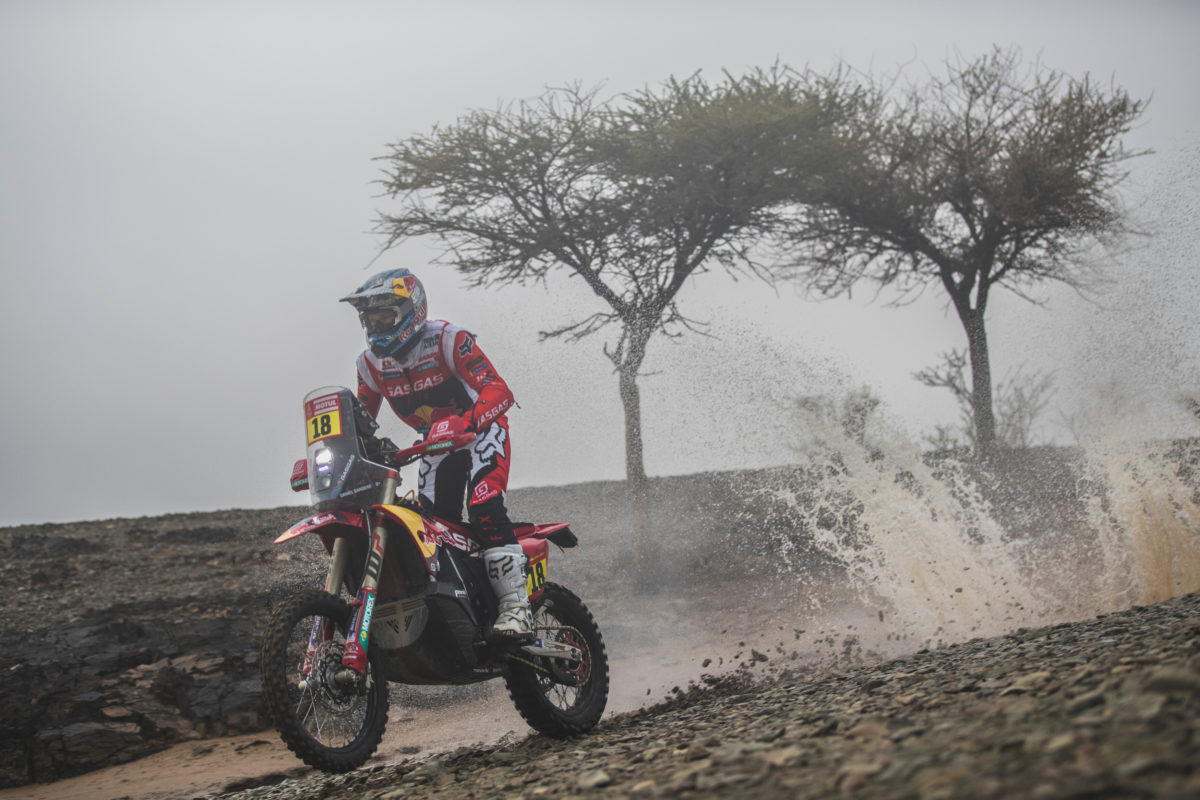 Daniel Sanders says he will “come out swinging” on Stage 9 of the Dakar Rally having regained almost 13 minutes after two days struggling with a stomach bug.

The sole remaining Red Bull GasGas rider revealed that he feared having to quit the race over the mystery illness, which he suspects may have been caused by a poisonous thorn which got stuck in his arm.

After an unofficial rest day due to the cancellation of the seventh special stage for the two-wheelers, Sanders was classified second-fastest on Stage 8 once Mason Klein (BAS World KTM) was issued a penalty for speeding.

The Australian only moved up one position to seventh overall but is now 7:03s from first position rather than 19:54s.

Another rest day follows before action resumes on Tuesday with a journey from Riyadh to Haradh, featuring wadis, canyons, and then a chain of dunes.

“[I feel] A little bit better,” said Sanders after Stage 8.

“We had sort of a rest day yesterday. We got to switch off the brain and try and eat a little bit, and try and get the energy levels back up.

“I’m still fighting this bug a little bit in the stomach. Hopefully I’m on the mend now, and tomorrow is another rest day, so we’ll rest up and come out swinging on Stage 9, hopefully.

“I’m really happy to make it to the rest day because, the other day, I thought I was going to pull out and I didn’t think I was going to keep going because the body was so drained,” he added.

The Bikes race at Dakar 2023 is now an eight-way fight after the classification was tipped on its head on Stage 9.

The top three on the road at the start of the day, including overall leader Skyler Howes (Husqvarna Factory) and his previously closest rival Toby Price (Red Bull KTM), fared no better than 17th once they reached the finish line.

According to Sanders, rain left for a slippery stony track which benefited those following even more than usual.

“The navigation was really difficult at the start,” he explained.

“The guys did a really good job but sure they lost a lot of time because it was wet and stony and it was really slick.

“As soon as we went over the stones, it just turned up a really nice, orange line, so it was really easy to follow and the guys did a really good job up front.

“I started seventh and we ended up catching the front pack so it just shows how tricky it was up front, so it was good to push and hopefully not lose too much time to the guys behind me who got to push all the way.”