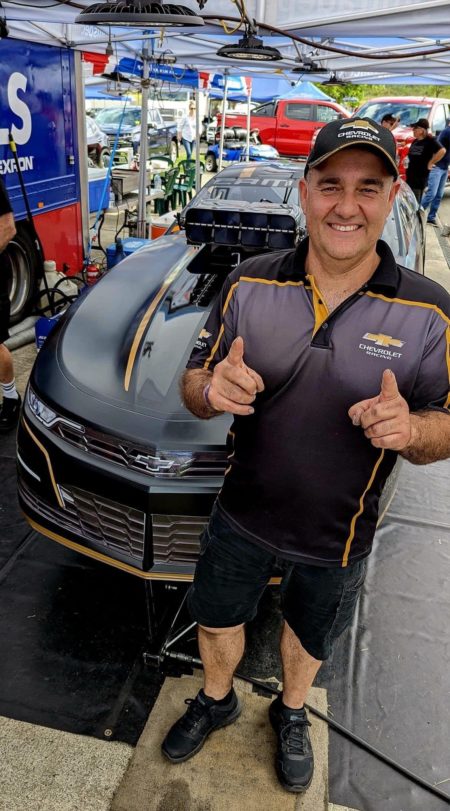 Tributes have been made to the late Sam Fenech. Picture: ACDelco Slammer Drag Racing Team

Tributes have been made to Sam Fenech after he died in a crash while competing in New Year Nitro at Willowbank Raceway.

Fenech lost control during a run down the left lane on the Saturday night of the event and crashed over the fence on drivers’ right, taking out a camera tower.

The camera operator is in hospital with non-life-threatening injuries, but the 55-year-old driver of the Camaro Doorslammer tragically lost his life.

Among the tributes are from Fenech’s ACDelco Slammer Drag Racing Team/Fabietti Racing, which reads:

“It’s with deep sadness, we acknowledge that Sam Fenech has passed away as a result of a racing accident this evening at Willowbank.

“Sam was and always will be a part of the Fabietti Racing family and was an icon of the drag racing community.

“He will be incredibly missed.

“Our thoughts are with Sam’s family at this time.”

PremiAir Racing, whose team owner Peter Xiberras is a Top Fuel champion as a driver, described the incident as “truly tragic”, while Red Bull Ampol Racing stated it is “deeply saddened” by the tragedy affecting a fellow Chevrolet team.

Supercars driver Todd Hazelwood also took to social media to express his sadness at what had transpired.

“My heart goes out to Sam’s family, pitcrew, friends and supporters,” he wrote.

“Also wishing the cameraman a fast recovery too.”

In an earlier statement acknowledging the incident, both championship organiser Top Fuel Australia and Willowbank Raceway “sen[t] our love and support to the Fenech family and the whole team at Fabietti Racing.”

To witness this tragedy at Willowbank Raceway tonight is absolutely heartbreaking.

My heart goes out to Sam’s family, pitcrew, friends and supporters. Also wishing the cameraman a fast recovery too. 🙏🏼