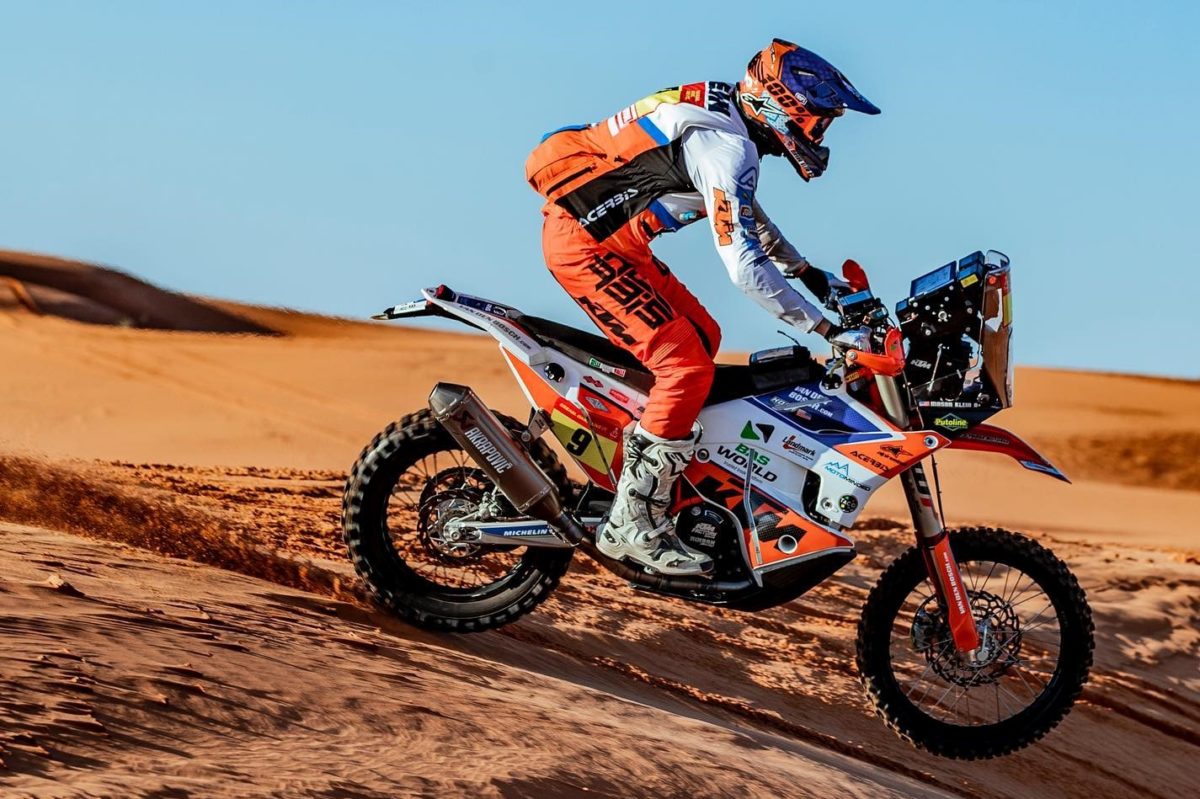 Dakar 2023 has been shaken up with Mason Klein back on top of the overall Bikes classification as Ross Branch won Stage 8.

Rain-interrupted changes to the route gave the two-wheelers a day off so far as competitive action was concerned before they resumed in earnest for a 346km special between Al Duwadimi and Riyadh.

BAS World KTM’s Klein jumped from seventh after the completion of Stage 6 to now lead the event in what represented a 13:33s turnaround relative to fellow American and erstwhile front-runner Skyler Howes.

The Husqvarna rider is nevertheless second overall, 47 seconds in arrears, with Red Bull KTM riders Kevin Benavides and Toby Price rounding out the top four at 2:00s and 3:45s off the pace, respectively.

Klein started Stage 8 only 12th on the road after two falls in the previous special and pipped Hero Motosports’ Branch to the quickest split to the first waypoint, 47km in.

He continued to be fastest until the refuel at Kilometre 203, where Branch took over the ascendancy before gradually stretching his margin to 1:33s by the finish line, making the Botswanan the ninth different winner in the eight stages proper so far and the Prologue.

Sanders had struggled for two days with an illness which he suspected might have been due to poisoning from a thorn stuck in his arm, but appears to have shaken off whatever ailment he did have given he was third on the day, 3:15s behind Branch.

Howes, on the other hand, was 19th-quickest at 15:06s away from first position on stage and Price fared barely better.

The two-time Dakar champion was 17th at 14:33s back once a one-minute penalty was applied after Howes and he had been second and third onto the road, respectively.

Navigation must have been tricky given Stage 6 winner Luciano Benavides could only guide his factory Husqvarna to the 21st-fastest time of the day, even after the application of opener bonuses.

As live, Branch is 25th overall after losing significant time with mechanical dramas on Stage 4, although other riders are still completing the stage.

A formal rest day will now be held before Stage 9 takes place on Tuesday, with a journey from Riyadh to Haradh, featuring wadis, canyons, and then a chain of dunes.