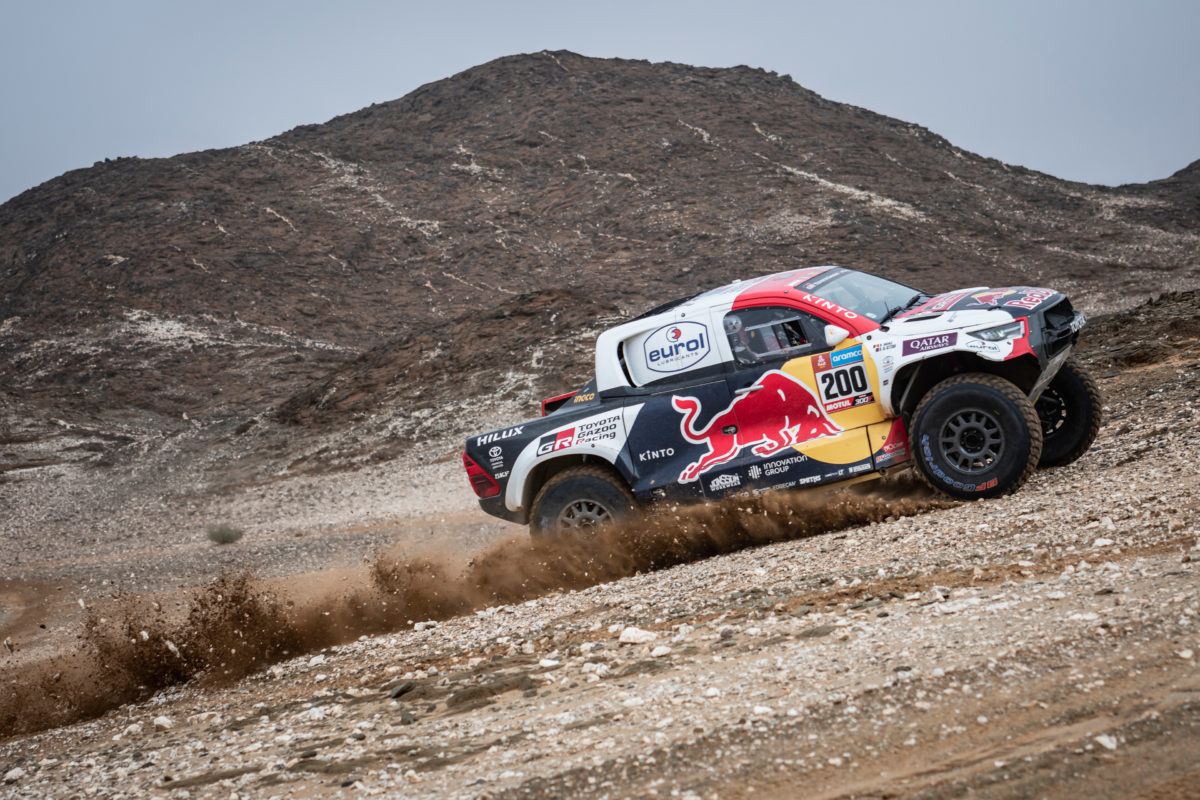 Al-Attiyah became the firm favourite for what would be a second consecutive Dakar crown and fifth in total when Audi capitulated on Stage 6, losing Stephane Peterhansel and Carlos Sainz as contenders after both landed heavily off the same dune.

Sainz did resume the rally, but with an 18-hour penalty for not completing the sixth special which leaves him outside the top 100 in the Cars classification with seven stages down and seven to go.

Stage 7 ran from Riyadh to Al Duwadimi as part of a route rearranged due to flooding earlier in the week at the latter bivouac, with a predominantly gravel 333km special.

Sainz was a contender for victory on the day, locked in battle with team-mate Mattias Ekstrom (Team Audi Sport), Al Rajhi (Overdrive Racing), and Guerlain Chicherit (GCK Motorsport) for the lead.

Ekstrom was fastest at the Kilometre 196 waypoint but stopped just another kilometre later and, once again, it was soon two Audis stranded in the same location.

The reason this time, however, was that the Swede had hit a rock, so Sainz stopped to hand over his suspension as a replacement for what Ekstrom had damaged, and then himself lost multiple hours having had to wait for the service truck.

“Not so nice for us today again, but we carry on to see what we can learn,” said Sainz.

“I stopped to help Mattias. I give my suspension and we had to wait for the truck.”

Al Rajhi gapped the Prodrive Hunter of Chicherit over the final 100km or so, in what was something of a consolation after mechanical problems on the day prior cost him five hours and a podium position in the rally.

Al-Attiyah was only 14th-fastest after he had the burden of opening the stage, as task made even more difficult with no Bikes special.

Still, the Qatari finished the day with an overall lead of 1:01:04s, from Lategan, Lucas Moraes (Overdrive Racing), and De Villiers in what remains an all-Toyota top four.

“We opened without line [tracks] and then Glen and Seb passed us,” recounted Al-Attiyah.

“Then the last part was really tricky navigation and suddenly we are, like, three [or] four cars together and really it was a big race but okay, we take care.”

‘Seb’ is Sebastien Loeb, who moved into the opener position as he pushed hard to try and recover time in his Bahrain Raid Xtreme Hunter.

The Frenchman was ninth-fastest on the stage and continues to hold fifth overall, 1:54:17s off the pace, while Ekstrom is 20th at nearly five hours down.

The Bikes rode straight to Al Duwadimi on a road section, with no special stage for the men and women on two wheels, while marathon rules apply overnight for the Cars.

All classes are back in competition for Stage 8, which runs from Al Duwadimi to Riyadh.