Stephane Peterhansel and navigator Edouard Boulanger were taken to hospital after a hard landing off a dune on Stage 6 of the Dakar Rally. Picture: ASO/DPPI/Charly Lopez

Stephane Peterhansel lost consciousness in a hard landing on Stage 6 of the Dakar Rally which saw both him and navigator Edouard Boulanger taken to hospital.

The latest stage of Dakar 2023 was a disaster for Team Audi Sport which has struck out what fading hope either of Peterhansel and Carlos Sainz had of winning the event this year.

Neither completed the Ha’il to Riyadh special although the latter did eventually make it back to the bivouac after both came undone on the same dune, 212km in.

“At the speed we were going, we took off and landed at the bottom of a dune which was 10 or 15 metres high,” recounted Peterhansel.

“Honestly, I have no memory of it because I lost consciousness.

“Edouard told me he was the one who switched off the engine. When I eventually came to, Edouard wasn’t in the car; he was lying in front of it.

“We wanted to gain time on Nasser [Al-Attiyah, rally leader], we were going too fast.”

Perhaps rubbing salt into the wounds for Audi, Sainz made essentially the same mistake, severely damaging the suspension on his RS Q e-tron.

“Stephane caught us before the CP [checkpoint],” said the three-time Dakar winner.

“I was right behind him, following closely. The next thing I saw was his car flying, and I flew after him and landed hard.

“We’ve broken our suspension and Edouard has injured his back.” 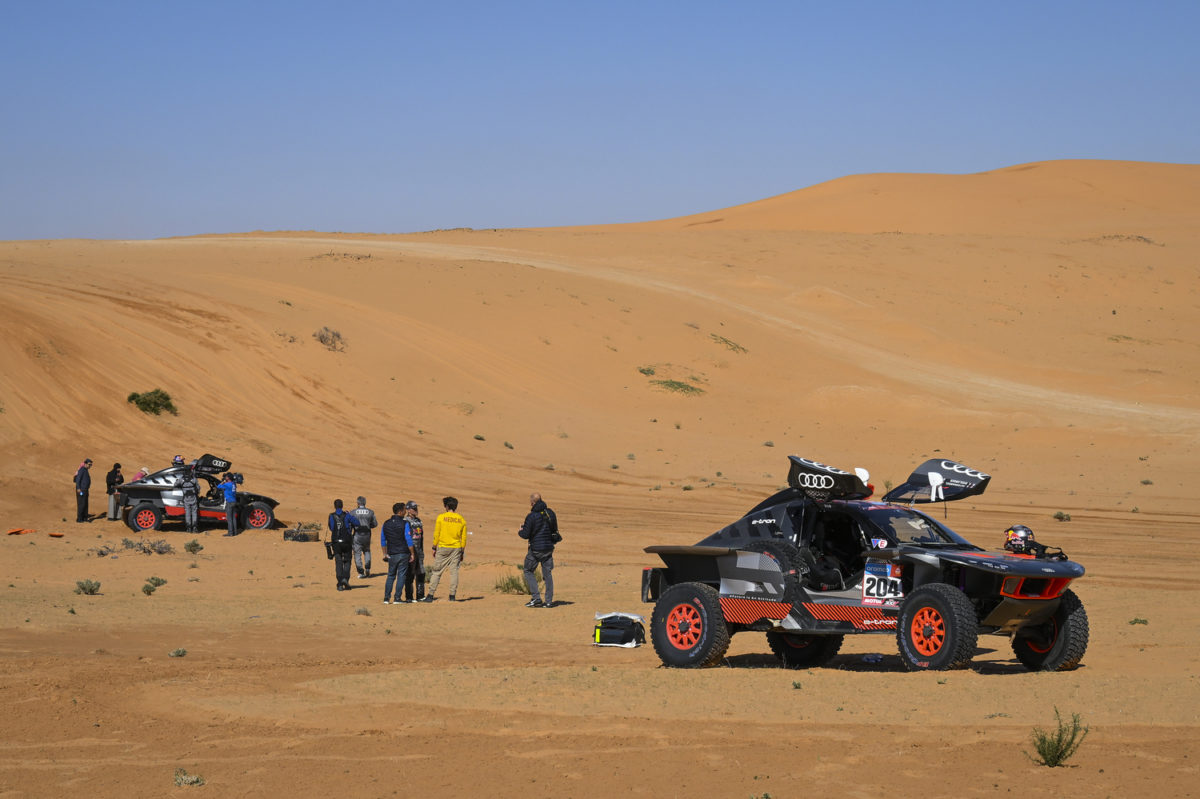 The same dune caught out both Peterhansel and Carlos Sainz. Picture: ASO/DPPI/Eric Vargiolu

Elongating the repairs for the Spaniard’s #207 entry may also have been the nature of its hybrid powertrain, with Audi noting that “a high-voltage expert” was sent with the support truck to the incident site.

The impacts may have been exacerbated by the wet weather which has also caused changes to the event route, as explained by Peterhansel before he had set off for the special.

“When the sand is wet, it’s much harder, and the camel grass becomes like concrete,” noted the 14-time Dakar winner.

“We’re at the limit of what the car can handle and what actually limits us is the damage that our bodies can take.”

Peterhansel started the day in second place while Sainz has gone from fourth overall to being several hours behind assuming he even continues in the race, because of the penalty he will incur for not completing the stage.

Audi’s calamities have left Al-Attiyah heading up an all-Hilux top four with more than an hour’s advantage over his factory Toyota Gazoo team-mate, Henk Lategan, while Mattias Ekstrom is fifth overall in the only RS Q e-tron which can be confidently predicted to start Stage 7.

“Already a year ago, we experienced a difficult first week at the Dakar Rally.

“Still, it’s possible for Mattias Ekstrom/Emil Bergkvist to compete all the way to the finish for the podium result that we’re aiming for.

“And if Carlos and Lucas [Cruz, navigator] can continue after the repairs, they are good for stage wins at any time.”