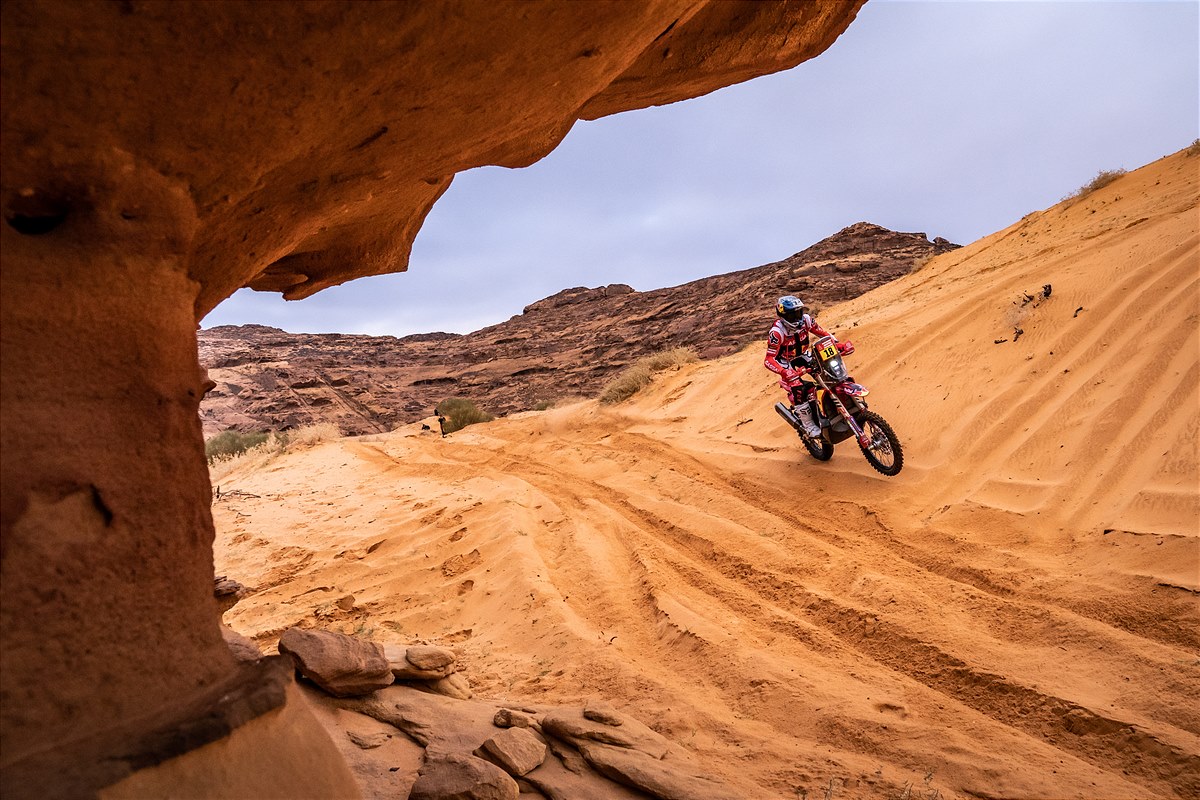 GasGas rider Daniel Sanders is beginning to struggle physically in his first Dakar Rally since crashing out of last year’s event.

The Australian retained his overall lead, albeit at a reduced 3:33s margin after incurring a speeding penalty, after setting the eighth-fastest time on Stage 4.

However, this is his first competitive riding since the nasty fall on a highway liaison at Dakar 2022, when Sanders broke his left elbow and wrist in an incident which left him “really lucky to be alive”.

After multiple operations, he admitted pre-event that making his comeback in Dakar 2023 was a “daunting” prospect, and the previously fractured elbow is proving to be an issue again.

“I didn’t expect it to be going this well after my preparation, but we’re going alright so far, so I’m happy with this.

“I think for me now, it’s just [a case of] trying to get some recovery and take it easy for the next few days because my arms are pretty sore already and the elbow’s not a hundred percent yet.

“We’ll take it easy; it’s a long race so I’m just trying to calm myself down every day.

“I said to myself and the family and friends back home that after the year off I’ll be happy with a top 10 [overall result],” he added.

“It’s been a very long year and we’ve changed onto a new bike that I’ve had no time on. I just have to gel with it as quick as I can, really.

“I only did five days testing in America in December and back home [for] two weeks recovery and straight to the race.”

Sanders lost time given he had to open the road on the first of two Ha’il loop stages but held on to top spot in the overall classification thanks to Mason Klein’s late fuel pump problem.

However, the Victorian was not without his troubles, some of which were self-inflicted.

“Today was a bit of a slow start,” he recounted.

“I had to open today and I haven’t really done any opening with road books for a very long time; since the last Dakar.

“It was really tricky navigation and a lot of the rain last night washed away the tracks, so I pretty much had to make my own track and make sure my navigation was good.

“I got caught by Skyler [Howes] after about Kilometre 100 [and] I had a bit of a brain fade today.

“I forgot to have a tinted lens so it was a clear lens all day during the sun so it was a bit of a mistake, an error by me, and that just really drains your brain.

“Trying to pick up the sand and the terrain is really hard.”

Sanders is due to start the fifth special stage this afternoon at 15:51 AEDT, with Joan Barreda Bort to lead the field out from 15:30 AEDT.