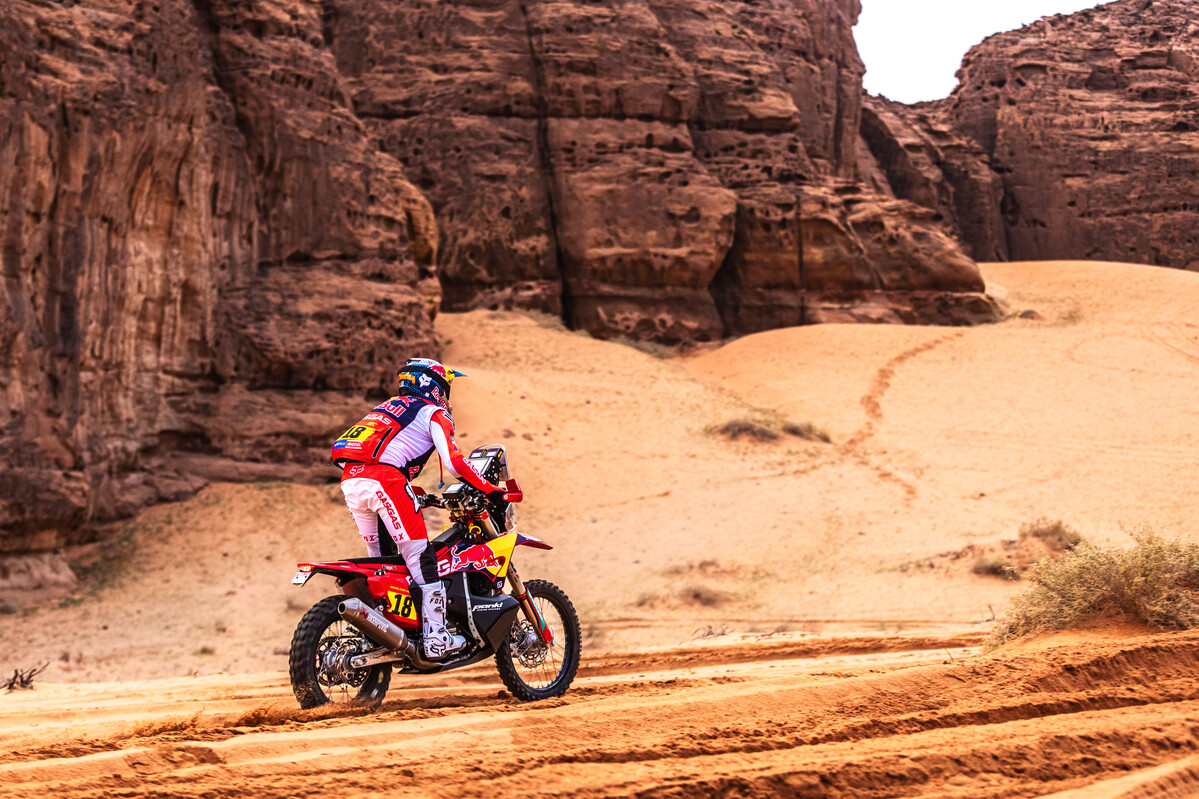 Sanders has provisionally been classified eighth-fastest on the sandy Ha’il loop stage at a deficit of 6:07s relative to Barreda Bort once the Australian’s opener bonus and a two-minute penalty is accounted for, with Klein 6:01s slower again on his BAS World KTM entry.

As it stands, Sanders lead the rally overall by a 3:33s margin over Skyler Howes (Husqvarna Factory), from Kevin Benavides (Red Bull KTM), Barreda Bort, and Toby Price (Red Bull KTM), the latter rounding out the top five at 7:17s off the pace of his compatriot.

Klein looked destined to reclaim the top spot in the overall classification which he held after Stage 2, but is now 10:05s away from the benchmark time in sixth position.

Back at the start of the fourth, 425km special stage of Dakar 2023, Sanders had the burden of opening the road given he had prevailed on the day prior.

While he unsurprisingly lost time relative to his key rivals, Klein was leading the stage even before the application of the opener bonus which he was picking up after starting third on the road.

That was the case from the Kilometre 95 waypoint until Kilometre 282, after which the bonuses kept the American sensation ahead of Quintanilla (Monster Energy Honda Team) at Kilometres 327 and 378.

However, a cruel blow befell the Rally GP debutant in the final 47km when he suffered a fuel intake problem and shipped around 10 minutes.

In the meantime, Barreda Bort managed to achieve a 70-second turnaround relative to his former team-mate Quintanilla between the penultimate waypoint and the finish line of the special to snatch victory by a slim margin.

Howes took third on the day, thanks in part to opener bonus time, with Price fourth at 2:24s slower than Barreda Bort.

Overall, Quintanilla sits seventh, from Van Beveren, Luciano Benavides, and Matthias Walkner (Red Bull KTM), the latter of whom needs to overturn a 28:25s deficit in the remaining 10 stages to clinch a second Dakar title.

Hero Motosports’ Joaquim Rodrigues, who gave the Indian marque its first Dakar stage victory last year, crashed out 90km into the special and was taken to hospital with an injury to his left leg.

The day would get even worse for Hero when Ross Branch experienced a mechanical problem and Sebastian Buhler ran out of fuel.

More sand and dunes are on the menu when another loop stage takes place around Ha’il tomorrow.