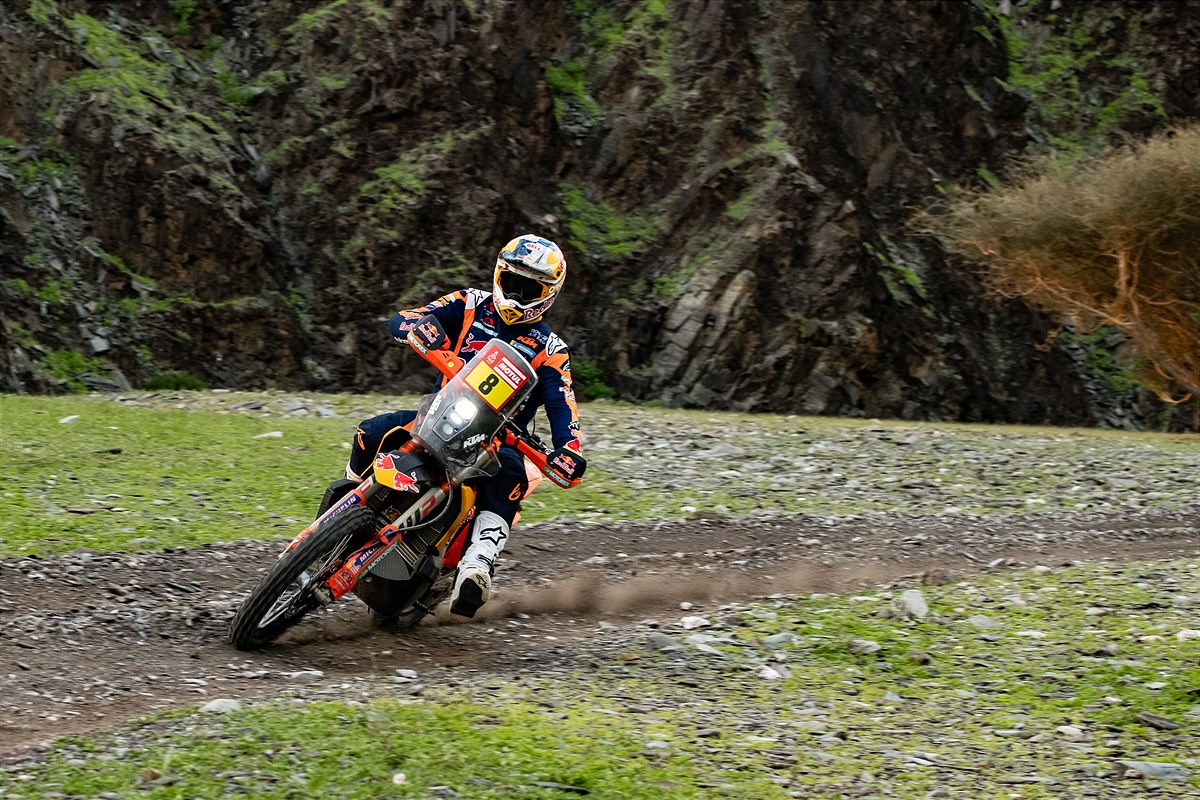 Toby Price is second overall in Dakar 2023 after Stage 2

Red Bull KTM’s Toby Price says he had to ride conservatively in order to survive Stage 2 of the 2023 Dakar Rally.

The 430km special stage between the Sea Camp and Al Ula proved to be a wet and rocky affair, with heavy-hitters Nasser Al-Attiyah, Stephane Peterhansel, and Sebastien Loeb all picking up punctures in the Cars.

In the Bikes, Price was fifth-fastest on the day and moved to second overall, 1:41s behind stage winner Mason Klein (BAS World KTM).

“Yeah, the organisation basically put us through rivers and rocks all day, so you can’t carry an average speed of 105 through this,” said the two-time Dakar champion.

“If you want to survive and get to the finish, you’ve got to take it a little easy.

“They definitely made it a tough one today. I think the projected time was meant to be a bit over four hours and it’s taken us close to five-and-a half to six hours.

“So, they were a long way off, but other than that, it was all good; we’re here in one piece and no crashes so, happy days.”

“It was 430km, but almost six hours of riding through some very tough, rocky tracks.

“I set off second today and caught Ricky [Brabec] by around Kilometre 120. After that we swapped positions at the front up to the final 100km or so when we were caught by another rider.

“It’s been exhausting, but I’m happy with my performance and the result after opening a lot of the way, so not a bad stage overall.”

“Due to the huge amount of rocks all over the track, it was not easy to find the right rhythm,” said the Chilean.

“Physically it was also a hard one, so it was quite an exhausting day for us, so the feeling of completing this challenge was quite rewarding.”

Strategy also played a part again, Daniel Sanders having a stage win in his grasp but opting to back off in the final 44km in order to enhance his position in the road order for the following day.

The Red Bull GasGas rider did so despite the opener bonus being on offer this year and Price was in a somewhat similar mindset after completing the stage.

“It’s only early in the race so, for sure, it would be nice to be back a little bit more but, all in all, it’s all been pretty good,” he remarked.

“We’re here and all in one piece”.

Stage 3, to Ha’il, looks like being another rocky affair, with more canyons along the 669km route.