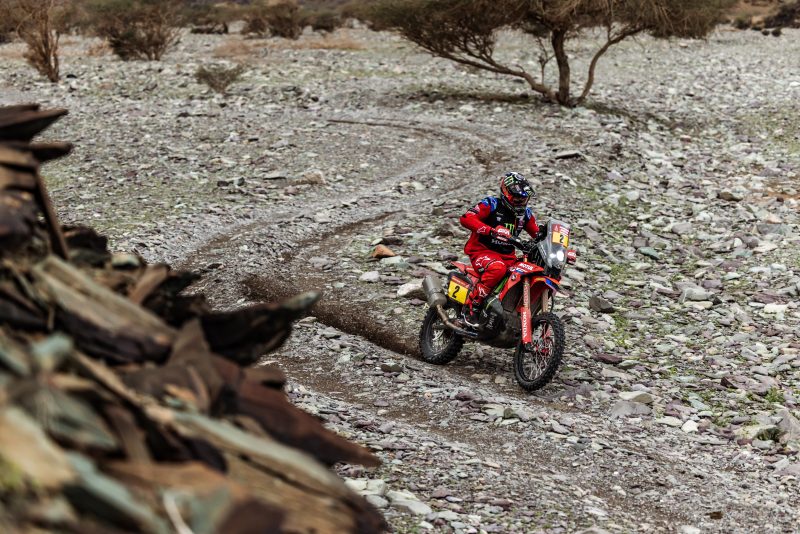 Ricky Brabec’s hopes of a second Dakar Rally title are over for another year after crashing out of Stage 3 of the 2023 event.

The Monster Energy Honda rider won Stage 1 of the rally and was vying with Red Bull GasGas’s Daniel Sanders for the lead of the latest hit-out, which takes the field from Al Ula to Ha’il.

However, he went down 274km into the special and is being taken to hospital with injuries to his neck.

“The Honda rider has suffered a fall after 274 km of the special and is now in the hands of the Dakar medical team,” read an update from official event timing.

“With injuries to his neck, Ricky Brabec has been transported to hospital for further examinations of his condition.”

The stage has seen some light rain and puddles, although it is not known if the weather conditions played a part in the crash.

Brabec was the first American to win the famous rally-raid when he triumphed three years ago, and was considered a contender again this time around.

He is now the second Dakar champion to crash out in just the first three stages proper after Red Bull GasGas’s Sam Sunderland broke a shoulder blade in an incident two days earlier.

Sunderland’s team-mate, Sanders, led by 3:02s over Red Bull KTM’s Kevin Benavides at the Kilometre 335 waypoint, with 112km of the special stage to go.