Sainz fights back from puncture to win Dakar Stage 1

Sainz fights back from puncture to win Dakar Stage 1 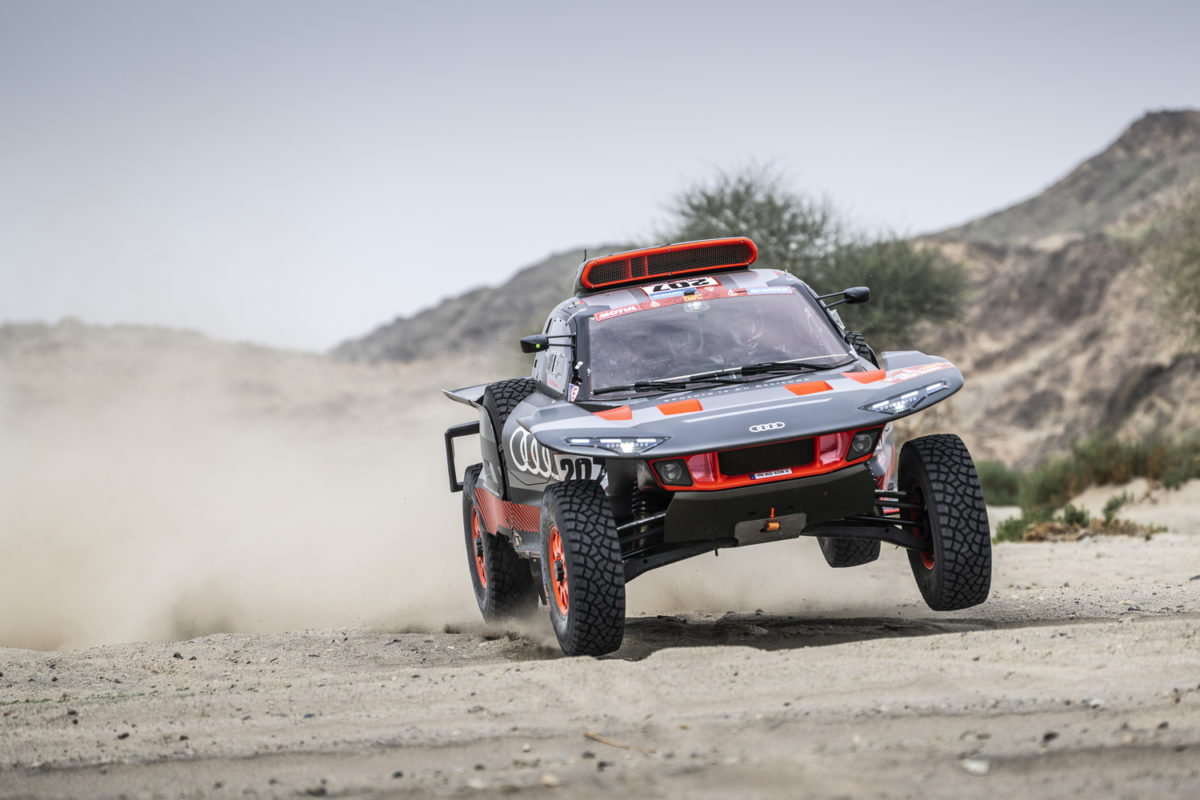 Carlos Sainz leads the 2023 Dakar Rally in the Cars after driving his Audi RS Q e-tron to victory on Stage 1.

He was still 1:55s behind the Swede at the penultimate, 277km waypoint, but continued his charge to the finish line at Kilometre 367.

The battle for bragging rights on the first stage proper had in fact become a duel between Sainz and Bahrain Raid Xtreme’s Sebastien Loeb by then.

In the end, the two World Rally Champions were separated by 23 seconds on the day, and just 10 seconds at the top of the overall classification.

Sainz said, “[We had a] puncture at the beginning, then after I was taking it a bit cautious because there were a lot of stones.

“Then everything went more or less fine up to the end; no problems with the car.”

After hopping out of his Prodrive Hunter, Loeb recounted, “It was a nice special overall, but there were big rocks at the beginning, so we stayed vigilant to avoid punctures.

“I took it easy in this part, but then we upped the pace gradually. We lost just under a minute due to navigation, but it was no big deal, so it was a good special for us.

“Tomorrow we will be second on the road, which is probably not a great place to be if you want to attack, but we’ll do our best.”

Ekstrom was classified third on stage and overall before a 15-minute penalty for Car #211 as punishment for missing a waypoint put him down to 13th in the event standings, 15:33s behind Sainz.

The 2022 Dakar champion sits sixth overall, 7:17s off the pace, after getting “lost a little bit” near the end of the stage.

Stephane Peterhansel is eighth overall in the other hybrid Audi, 8:51s behind his team-mate, after two punctures forced him into a conservative approach.

“Let’s stay positive and say we’re in a better position than last year, when we were knocked out of contention on day one,” noted ‘Mr Dakar’.

“We had two flats. The first one was my fault and the second due to a biker’s dust trail.

“When you’ve used up your two spare wheels, there’s no more room for error. If you blow up another wheel, you have to wait for your service truck or finish on three wheels.

“We played it safe from then on and ended up losing close to 10 minutes.”