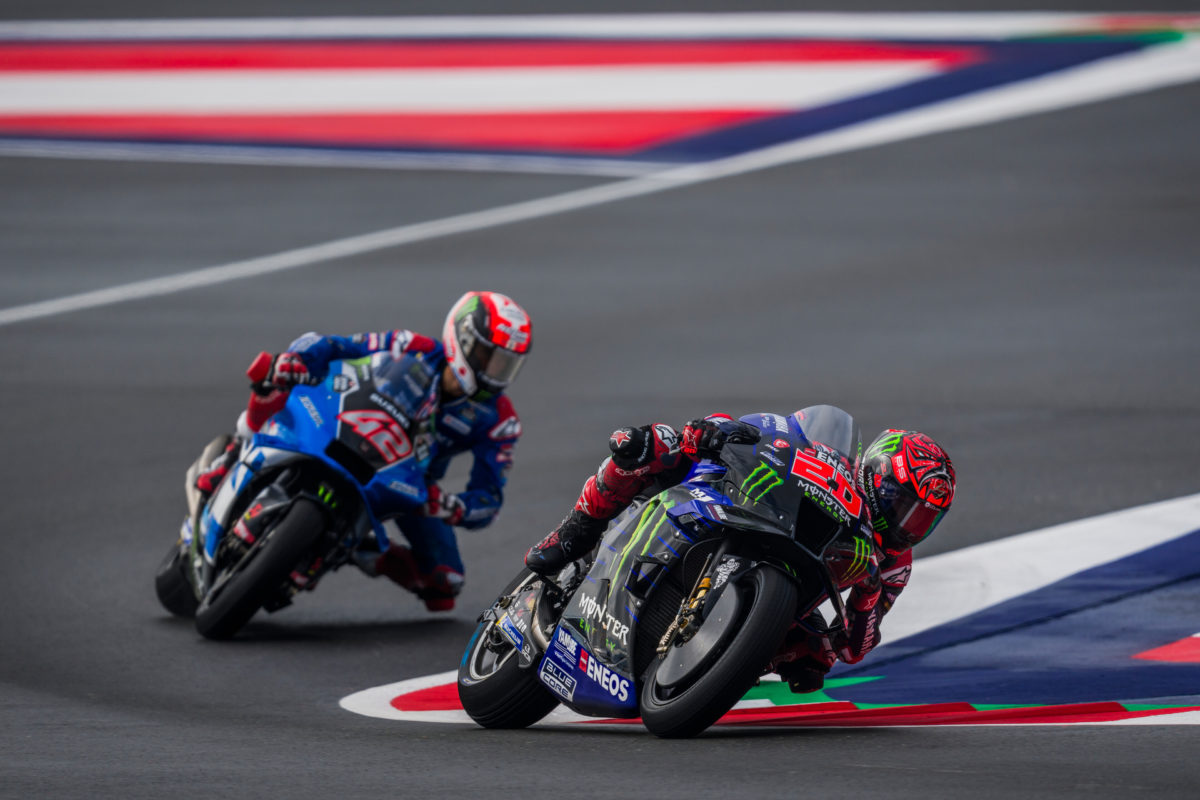 Its now former Team Manager Livio Suppo claims that 2021 MotoGP champion Fabio Quartararo “would have” defected to Suzuki given his ongoing frustration with Yamaha.

‘El Diablo’ finished behind only Ducati’s Francesco Bagnaia in the 2022 title race, but was hamstrung by an especially uncompetitive YZR-M1.

From the off, it was clear that something other than the Yamaha was the bike to have last year, and the Suzuki GSX-RR looked among the best packages early in the season.

However, the Hamamatsu marque’s from dropped off in the wake of the shock decision of top management to axe its MotoGP programme, something communicated to the team in the post-race test after Round 6 of the season at Spain’s Jerez.

Weeks later, it was be announced that Quartararo had signed on again to ride for the Monster Energy Yamaha team, putting misgivings about particularly its engine behind him.

However, he would be left “disappointed” on that front when the Valencia post-season test came around, as was team-mate Franco Morbidelli.

Quartararo had finished on the podium just once in the latter seven races of the 2022 campaign whereas Suzuki, ironically, won two of its last three in MotoGP for the foreseeable future.

The Frenchman is not alone in being let down by his team, given Marc Marquez’s ongoing battles at Honda, but Suppo says he would have gone as far as switching camps if that was possible.

“It seems to me that [Quartararo and Marquez] are quite fed up with their situation, to the point that Quartararo would have come to us very willingly,” Suppo told MOW Mag.

“And it would have been fun to see him on a Suzuki.”

Ironically, both of Suzuki’s riders sought refuge with Honda, 2020 champion Joan Mir with the factory team and Alex Rins at LCR.

Suppo, though, believes Quartararo and Marquez will struggle again this year.

“Fabio and Marc Marquez are two of the strongest riders, but on paper they will have to fight with their bike and this is a bit of a shame for the world championship,” he added.

“As for Fabio, I wouldn’t want him to get to the point of stopping believing; he has been putting a [plaster] on it for many years.

“If the bike continues to suffer so much in top speed the chain could come down.

“Instead, I think Marc has lost a bit of confidence in Honda, at least from the statements he makes and the fact that he stopped testing very early in Valencia.

“It seems that they don’t believe in it so much anymore, so it’s really difficult to understand who will be more competitive with each other.

“It will depend a lot on how much the respective racing departments will be able to improve the bike.

“We hope that this winter both Honda and Yamaha will be able, for the sake of the championship, to fix the bike.”

The Shakedown Test takes place at Malaysia’s Sepang from February 5.