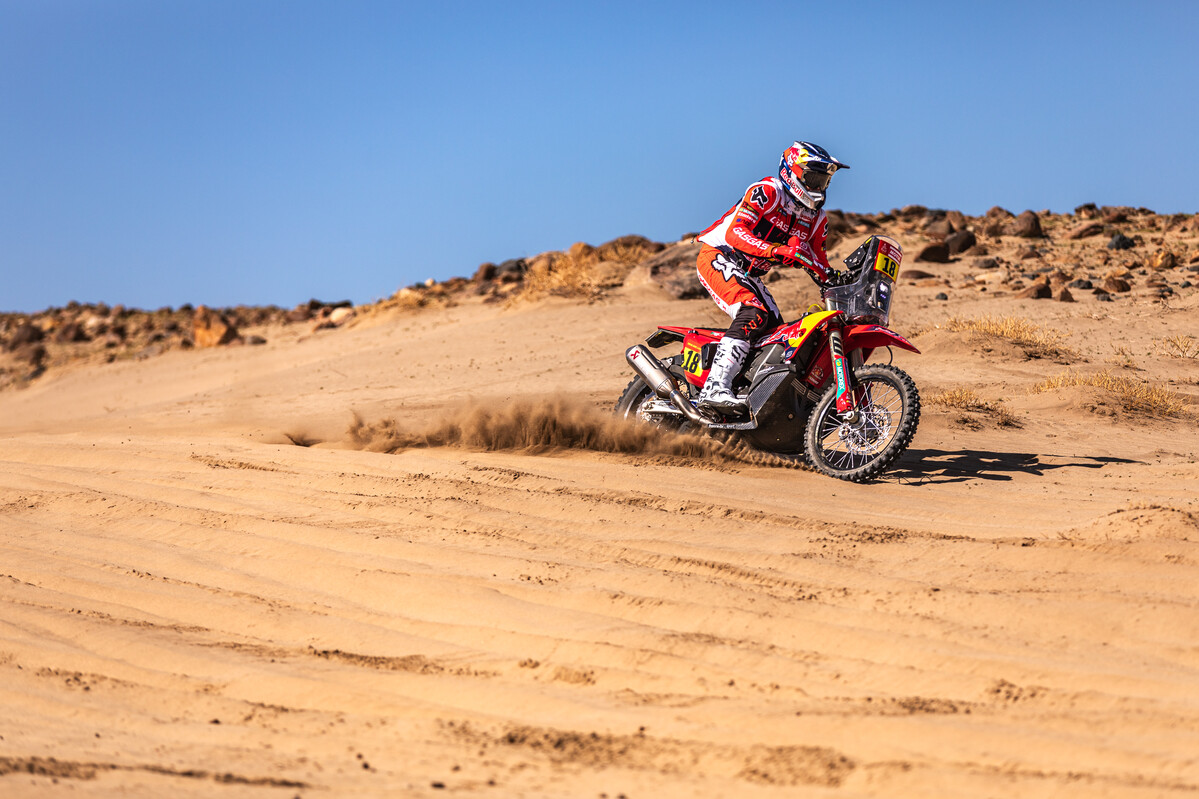 GasGas rider Daniel Sanders has moved into the overall lead of the Dakar Rally with victory on Stage 1.

The result makes for a mixed day for Red Bull GasGas Factory Racing given its other rider, 2022 champion Sam Sunderland, was airlifted to hospital after crashing just 52km into the 367km special.

Sanders is up by exactly a minute over second-placed Joan Barreda Bort (Monster Energy JB Honda) in overall terms once Prologue times, which are multiplied by five for the purpose of the broader classification, are accounted for.

The Australian had been second-fastest in said Prologue, one second behind compatriot Toby Price, and hence was able to choose a favourable position in the road order for the trek down the Red Sea coast from the Sea Camp.

However, he took his time to make his way to the top of the stage leaderboard as American Mason Klein, who is making his debut in the Rally GP class for the front-runners at this year’s Dakar, set the pace.

Klein (BAS World KTM) was quickest to the Kilometre 133, Kilometre 168, and Kilometre 277 waypoints, although Sanders had closed the gap to 20 seconds at the latter.

In the final 90km, the rookie lost a chunk of time and Sanders was able to snatch Stage 1 honours by just seven seconds over Pablo Quintanilla, who finished strongly on his Monster Energy Honda.

Behind Sanders and Barreda Bort in the overall standings is Ricky Brabec at a further 15 seconds further back, from Pablo Quintanilla (Monster Energy Honda) and Benavides.

Monster Energy Honda’s Jose Ignacio Cornejo Florimo is already 12:35s in arrears in 15th after starting second in the road order and quickly moving into the position such that he was blazing the trail for the rest.

He could drop another spot given Red Bull KTM’s Matthias Walkner is 19:07s back from Sanders in 22nd overall.

That is because the 2018 champion is likely to be credited time which he lost assisting Sunderland, with timing showing Walkner ceding about 13 minutes between the Kilometre 37 and Kilometre 88 waypoints.

After the Stage 1 finish line, an untimed section takes the field back up to the Sea Camp.

They will therefore set off from there tomorrow for Al Ula, with Stage 2 featuring a dune-heavy 430km special.