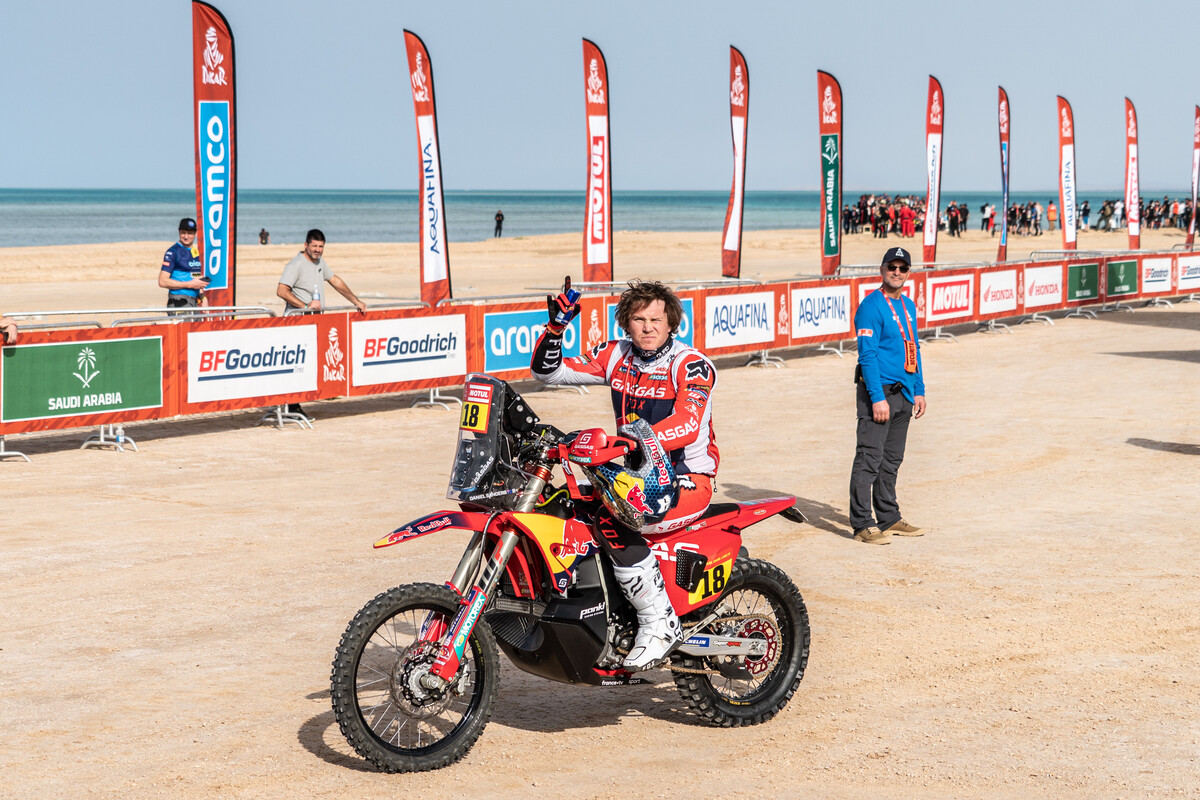 Daniel Sanders was second in the 2023 Dakar Prologue

Daniel Sanders has reported running off-course on multiple occasions in the Prologue for Dakar 2023 despite setting the second-fastest time.

The Red Bull GasGas rider was bettered only by fellow Australian Toby Price (Red Bull KTM) on the tight 13km route around the Sea Camp, in which the field is based until it sets off for Stage 2 of the event.

Just one second separated Price and Sanders, even though the latter admitted his was not an especially tidy run.

“It was a pretty crazy eight minutes of the Prologue,” said the Victorian.

“It was pretty tough to stay focused and to find good traction with the bike. It was really slippery, the terrain, so it sure was hard and difficult for everyone.

“For me, it was [a case of] just trying to stay on the track.

“I ran off the track maybe three or four times from pushing too fast but, all in all, it was a pretty good run, finishing second, so I’m happy with this.

“I thought, with the mistakes I made, it was pretty good, and still showed that I have some pace after a year off, but this is just Prologue, and the Dakar starts tomorrow, really.

“It just gives me a good starting position for tomorrow and we get to select this later on tonight.”

Sanders had not competed since an ugly crash in Dakar 2022, when he slid into a kerb at around 100km/h during the pre-dawn liaison on Stage 7 of the event.

He underwent surgery multiple times and admitted he faces a “daunting” comeback in the 2023 edition of the famous rally-raid.

As such, the 28-year-old has to balance strategy, which will include considerations of the new opener bonus system, against getting back to his competitive best.

“I think with how the bonus system works for opening, there’s no bonus for Day 1, so it’s not necessary to start up the front,” noted Sanders.

“For me, having a year off, not many roadbooks and training – I haven’t really done many since the start of the year, since the last Dakar – so it’s going to be important to start back and find the flow and the rhythm, so this is what I’ll do.

“I’ll probably start way back and get familiar with the new bike and keep pushing until we get into the good rhythm.”

Stage 1 includes a 367km special down the Red Sea coast, with sandy and stony sections, which gets underway this afternoon (AEDT).