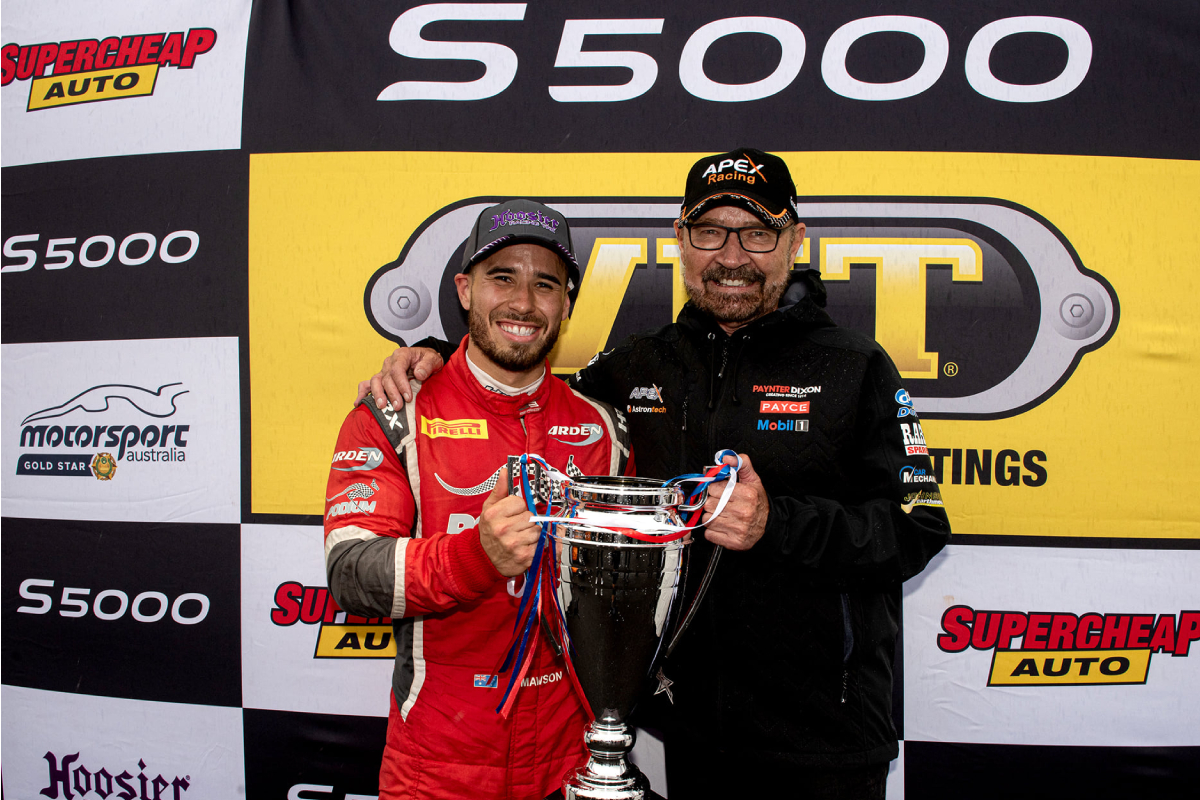 John Bowe believes Joey Mawson has what it takes to earn a spot on the Supercars Championship grid.

In addition to his two S5000 championship victories, he sealed the ADAC Formula 4 title for Van Amersfoort Racing in 2016, beating his former team-mate and future Formula 1 driver Mick Schumacher to the honour.

Mawson and Bowe struck a friendship after the former lifted the John Bowe Trophy upon sealing victory in the 2021 VHT S5000 Australian Drivers’ Championship round at Sandown International Raceway.

The duo regularly catch up due to their involvement as drivers for the Fastrack V8 Race Experience.

Bowe told Speedcafe.com he believes Mawson is worthy of an opportunity in Supercars.

“Anybody that does spend a bit of time overseas, they learn the tougher side of racing and he did a very good job overseas,” Bowe said.

“He’s the real deal and he’s proven it.”

While Super2 and Super3 is the preferred pathway for drivers to make it in Supercars, it can be difficult for aspiring drivers to raise the necessary funding.

Bowe believes that the S5000s should be considered a viable precursor to Supercars, a category that Mawson has proven himself in.

“I’ve always been of the belief that if you can drive a good, fast open-wheeler well, you can certainly can make a fair fist of touring cars or Supercars,” Bowe said.

“He drives those S5000s very well and they’re not an easy car to drive.

“They are big, fast, brutal, hard tyres, power-to-weight ratio is very high, they’re not a toy.

“Anybody that can drive those S5000s will certainly do okay in Supercars.”

When made aware of the backing, Mawson said he was honoured to attract the support of Bowe.

“It means a lot,” he told Speedcafe.com.

“John is an Australian Touring Car legend, so just to be able to communicate with him, there’s still a 12-year-old inside of me that gets a little bit starstruck.

“It’s very much a privilege to really get his backing and his blessing.”

Since returning to Australia, Mawson has set his sights on securing a Supercars seat.

“That’s been my goal, to make it in Supercars, it is the pinnacle of motorsport in Australia,” he added.

“It’s definitely where I want to be and that’s always been my desire since making the trip back home and settling down here.”

In progressing towards the goal, Mawson has gained Supercars experience, completing evaluation days with Brad Jones Racing in 2021, as well as with Walkinshaw Andretti United in November.

While an opportunity to secure a Super2 Series drive for next year was presented to Mawson, it was difficult to meet the budget required in the timeframe.

Resultantly, Mawson is now considering a partial campaign in the Super2 Series rounds in 2023.

“Raising the funds has been so difficult to do a full season, so obviously the goal has changed now to do hopefully some selected round if I’m able to come up with budget,” he declared.

He also expressed interest in an endurance drive, should an opportunity arise.

“I think that’s the best way to really get your foot in the door, because once you’ve gotten into a drive then you can really show your potential in a Supercar and then it’s a lot easier to convince Supercar teams to give you a chance to be able to get a full-time drive.

“I was close to getting an enduro drive this year, I was in contact with the team but in the end, it fell through, so that’s obviously another goal to be able to crack into Supercars.”

While not having confirmed his plans for 2023, Mawson said he will likely be gunning for a third S5000 Australian Drivers Championship title.

“I wasn’t planning to come back for a third season but now with the situation changing I’m hungry to come back and try and try and get three out of three and make it a new part of history as well with the Gold Star,” he declared.

“There’s been a fair few people that have done the double, but I think there’s a very short list that has managed to win it three times.”