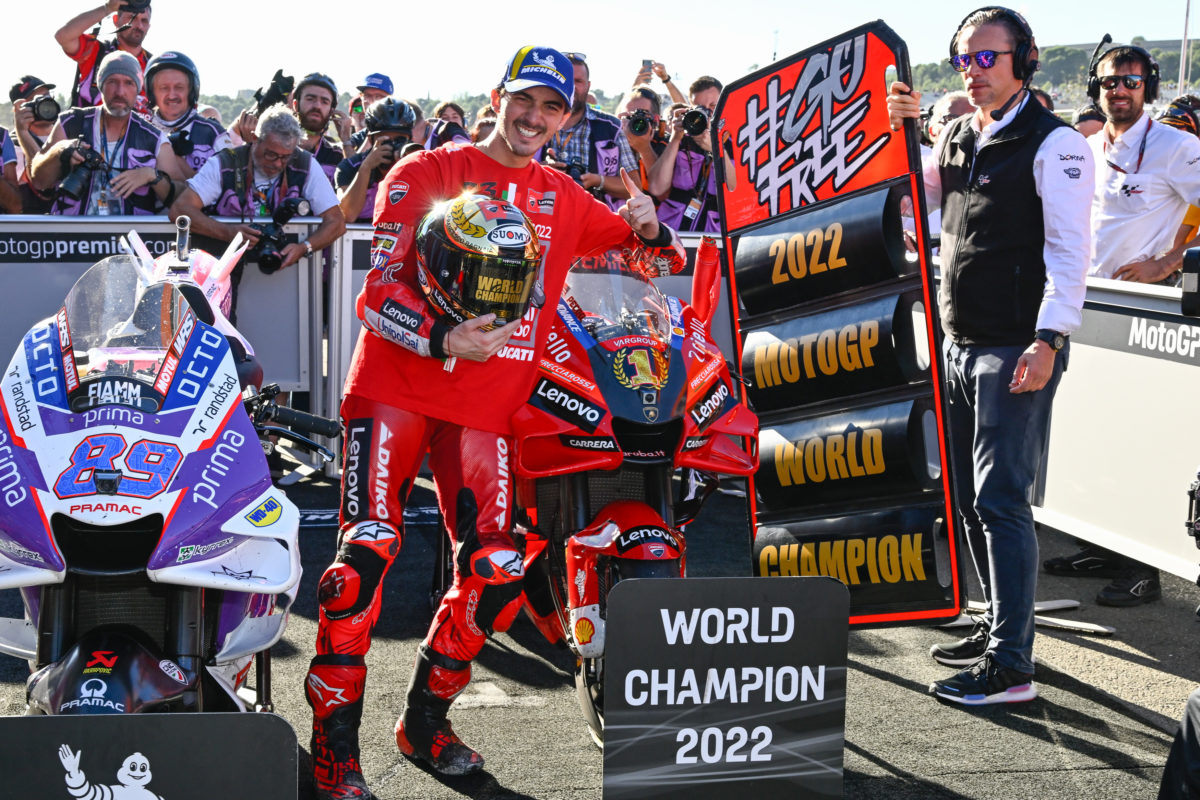 Will Francesco Bagnaia actually change to #1 in 2023?

This year’s MotoGP champion Francesco Bagnaia remains undecided as to whether to stick with #63 or take up his right to the #1 plate.

The Italian clinched his first premier class title and Ducati’s first riders’ crown since 2007 by a 17-point margin over Fabio Quartararo.

The latter’s Monster Energy Yamaha was the #20 entry despite the Frenchman winning the championship in 2021, and it is still not clear if #1 will be seen on the grid next year.

“The #1 fascinates me but also my #63, so the choice will be quite complicated,” said Bagnaia at a celebratory event put on by his official fan club in Chivasso, Italy.

“I’ll think about it, now I don’t have the desire to think about next year,” he added, having committed to turning off his phone until the new year.

If ‘Pecco’ does exercise his right to #1 it would represent yet another change of number on the front fairing of his motorcycle.

Grand prix riders typically carry the same number from Moto3 all the way up to MotoGP where possible, but that has not been the case for Bagnaia.

However, Franco Morbidelli was already using #21 when Bagnaia arrived in Moto2 in 2017 and hence he opted for #42, with which he would win the intermediate class title in 2018.

In 2019, Morbidelli was likewise already in MotoGP, as was Alex Rins using #42, when Bagnaia made the step up, meaning he reverted from double-21 to triple-21.

Casey Stoner was the last to ride with it, in 2012, given Jorge Lorenzo, Marc Marquez, Joan Mir, and Quartararo all subsequently stayed with their regular number in the season(s) after winning the championship.

Shane van Gisbergen finally switched to #1 as a tribute to Holden in this month’s Repco Supercars Championship finale in Adelaide, representing a first since 2018 given he typically keeps #97, while Scott McLaughlin retained Dick Johnson’s famous #17 after his title triumphs.

Formula 1 adopted the system of permanent driver numbers in 2014 and, since then, only Sebastian Vettel that year and Max Verstappen this year have made the decision to run #1.

The #1 plate did make an appearance last year, however, when JR Hildebrand drove a one-off AJ Foyt Racing entry in the Indianapolis 500.