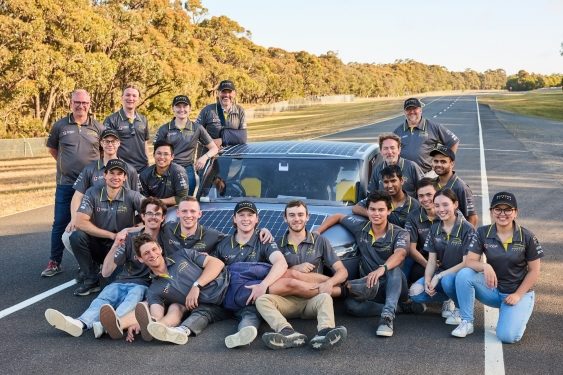 The Sunswift 7 and part of the UNSW Sunswift Racing team that developed it. Image: Richard Freeman/UNSW.

The world’s fastest EV is an Australian-developed racer engineered by students from the University of New South Wales. A Guinness World Record now belongs to the UNSW Sunswift Racing team after its solar-powered Sunswift 7 EV covered 1000km in 11 hours, 53 minutes and 32 seconds – on a single charge.

“This team have focused on ultimate efficiency in order to break this world record. They have shown what is ultimately achievable if you concentrate on aerodynamics, and rolling resistance and the use of smart materials,” said Team Principal, Professor Richard Hopkins, who has worked for F1 teams including Red Bull and McLaren and is currently High Performance Advisor to Walkinshaw Andretti United.

“I used to work in Formula One and nobody thinks we’ll be driving F1 cars on the road in five or 10 years,” said Hopkins.

“But the technology they use in F1 really pushes the boundaries and some of that filters down [to regular vehicles] and that’s what we are trying to do with Sunswift and what this world record shows is achievable.”

The Sunswift 7 is a purpose-built ‘hypermiler’ developed by a team of students from the UNSW, the program having broken many solar-car performance world records since it began in 1996.

The ‘7’ uses a carbonfibre chassis and an aerodynamically efficient body with a drag co-efficient of only 0.095. It’s covered by 4.6 square metres of silica solar panels that power two in-hub electric motors in the rear wheels. The battery pack steps in when required to provide additional/supplementary drive.

Watch WAU’s Chaz Mostert swap his WAU Supercar for a drive in the Sunswift 7 at the Valo Adelaide 500 earlier this month.

“During this record, the energy consumption was just 3.8kWh/100km, whereas even the most efficient EVs on the road today only achieve a rating of 15kWh/100km and the average is around 20kWh/100km,” Hopkins said.

In the course of the sub-12 hour run, driver changes were carried out, while some battery management issues and a puncture threatened the result, but the team achieved the record in spite of the challenges.

“Let’s remember, these are not the best-paid professional car makers in Stuttgart working for Mercedes. This is a bunch of very smart amateurs who have taken all the ingredients and put it together in a brilliant way,” he said.

“During this record, the energy consumption was just 3.8kWh/100km, whereas even the most efficient EVs on the road today only achieve a rating of 15kWh/100km and the average is around 20kWh/100km,” Prof. Hopkins added.

The ‘7’ is the third Sunswift racer to combine solar and electric propulsion, with its predecessor, ‘VIolet’ setting a Guinness World Record in December 2018 for the lowest energy consumption for a vehicle driving from Perth to Sydney. ‘VIolet’ also finished second overall and took the Cruise Class victory in the 2019 Bridgestone World Solar Challenge.

The Sunswift Seven will compete in the Bridgestone World Solar Challenge from Darwin to Adelaide on October 20-27, 2023, the first since 2019 following the cancellation of the 2021 event.