Greg Rust previews the 2022/2023 Speedcafe.com KTM Summer Grill with a stellar line-up of guests to quench your motorsport thirst during the holiday break and why it’s our best series yet. 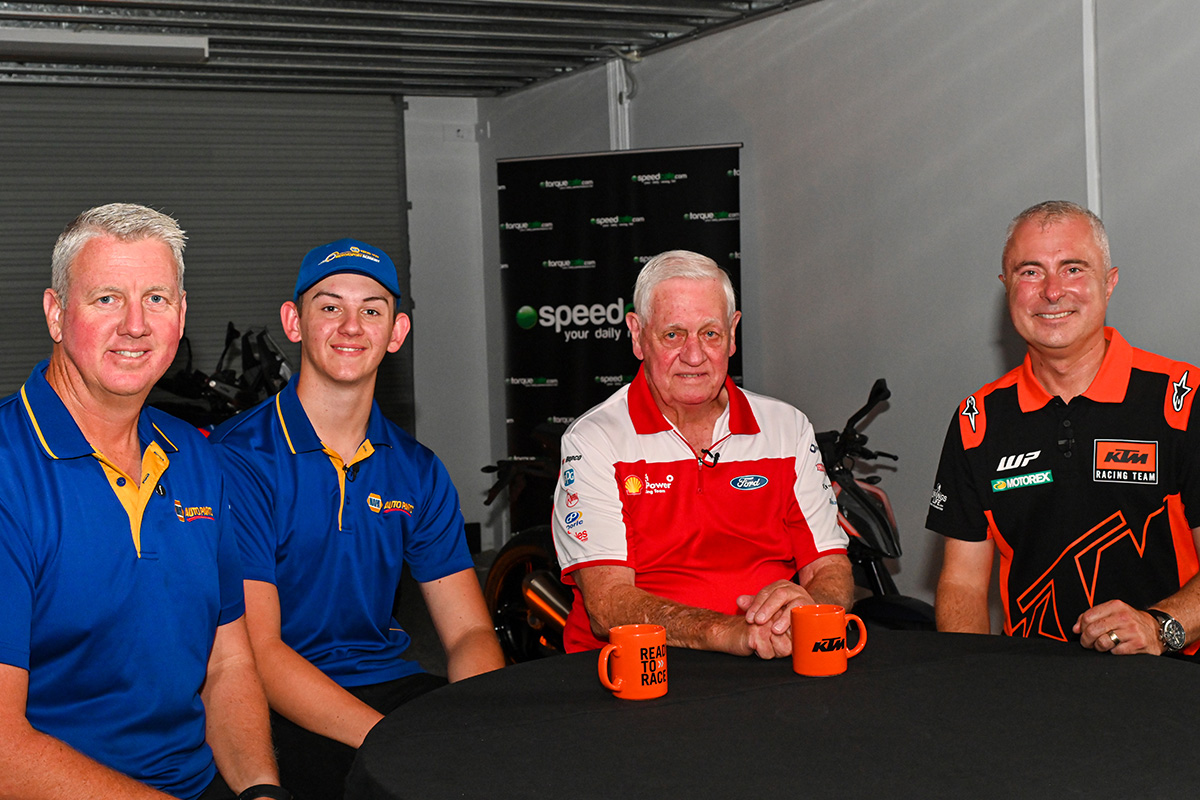 I’m a huge believer in guests being the focal point when it comes to TV interviews or podcasts. I try to just drive the conversation I’d imagine you would like to have with them if you ran into them at a bar or bumped into them at the airport. Sure there’s a bit of broadcast polish but fundamentally it’s just chat and mainly the guest in their words.

When the Speedcafe.com team planted the seed mid-year that they were going to deliver the KTM Summer Grill again over the Christmas holidays I wanted to make my contribution feel like that so you could enjoy the episodes over a morning coffee or with an amber ‘lemonade’ while cooking on the BBQ. Crush’s initial words were, “Rusty … leave some room in the diary after Adelaide for the Grill,” so I did. In the months that followed they hatched some big plans.

I haven’t done every season of the Summer Grill since it began but I’ve been involved in most of them. My colleagues Jack Perkins, Cameron McConville, Paul Morris and Greg Murphy have all played a part in its growth with stints at the desk too. The basic framework is a 15-minute (give or take) video which is a perfect bite sized length in my opinion. Over time they’ve been topic driven, thought provoking and even created a bit of debate. This season the Speedcafe team wanted to give you access like never before and variety. What they’ll roll out is tremendous!

2022 IndyCar champion Will Power beams in from the US. Scott McLaughlin joins us on set and so does Shane van Gisbergen. We have a ripper all-in chat with three generations of the Johnson family, Dick, Steve and Jett. Triple Eight co-owner Jessica Dane drops by for one of our most engaging chats ever. TCR champion Tony D’Alberto Zooms in and so does WAU boss Ryan Walkinshaw on the eve of his team’s switch to Mustangs.

In the wake of Mat Coch’s visit to Abu Dhabi for the final round of F1 and post-season testing, we’ve been given incredible access which we’re very grateful for. Red Bull’s Christian Horner is on the Grill for the first time along with Zak Brown from McLaren and fan favourite, Guenther Steiner from Haas, who is as direct and frank as ever while having a bit of a laugh with us too.

There is a ‘Bathurst wildcard’ convo with Craig Lowndes, Declan Fraser, Greg Murphy and Matt Chahda plus a candid Roland Dane just like his Speedcafe columns. I was relieved to see Tony Quinn in person, too, after his massive crash in Townsville; I thought it would be a lot longer before we had that chance again. He was as forthright and funny as usual.

I try not to think of one interview as better than another. It felt like there was a takeaway from each of them and there’s more guests than I’ve just rattled off. Mark Webber, for example, on the inner strength of Oscar Piastri and why he’s not high maintenance. And I especially loved the insight from Dick Johnson Racing’s Ben Croke and Triple Eight’s Jeromy Moore on Gen3. At a time of huge workloads for the teams (the amount of hours staff have put in staggered me) these two kindly took time out to come into our studio and to really dissect the process for the fans.

As usual the news cycle for Speedcafe.com doesn’t stop and there’s been plenty happening in recent weeks around our content shoot so if for some reason we don’t cover a particular topic, remember it’s a relaxed summer conversation and those subjects you may want to hear more on will likely have been covered by Speedcafe.com articles since we recorded.

So from tomorrow until just after Dakar finishes enjoy a daily motorsport fix right here. Please remember it’s the holiday break – the Festive Season – so play nice or at least be constructive in the comments. That’s a huge mantra of mine as you know. I’m all about quality, passion-fueled conversation and I know this will fill a void until we go racing again.

Merry Christmas to you and all your friends and family.