Mercedes-AMG had already wrapped up the manufacturers’ championship and was guaranteed that at least one of its drivers would score that title, but Juncadella’s hopes took an early hit.

The Spaniard had not completed a lap when the #89 GruppeM entry retired with a cooling system issue, which also snuffed out the hopes of co-drivers Raffaele Marciello and Jules Gounon sharing the championship with him once drop scores were accounted for.

It marked a sorry end to the race for the team which had locked out the front row, given the #98 Mercedes-AMG GT3 had not long succumbed to issues arising from a practice crash.

After that GruppeM one-two in qualifying, it was an AF Corse Ferrari one-two at the end of 12 hours of racing around the Yas Marina Circuit, with victory to the #71 488 GT3 of Antonio Fuoco/James Calado/Alessandro Pier Guidi.

Finishing 14.4 seconds back at the chequered flag was the #50 entry of Nicklas Nielsen/Davide Rigon/Alessio Rovera, with the podium rounded out by the #25 Audi Sport Team Sainteloc entry of Patric Niederhauser/Christopher Haase/Erwan Bastard. 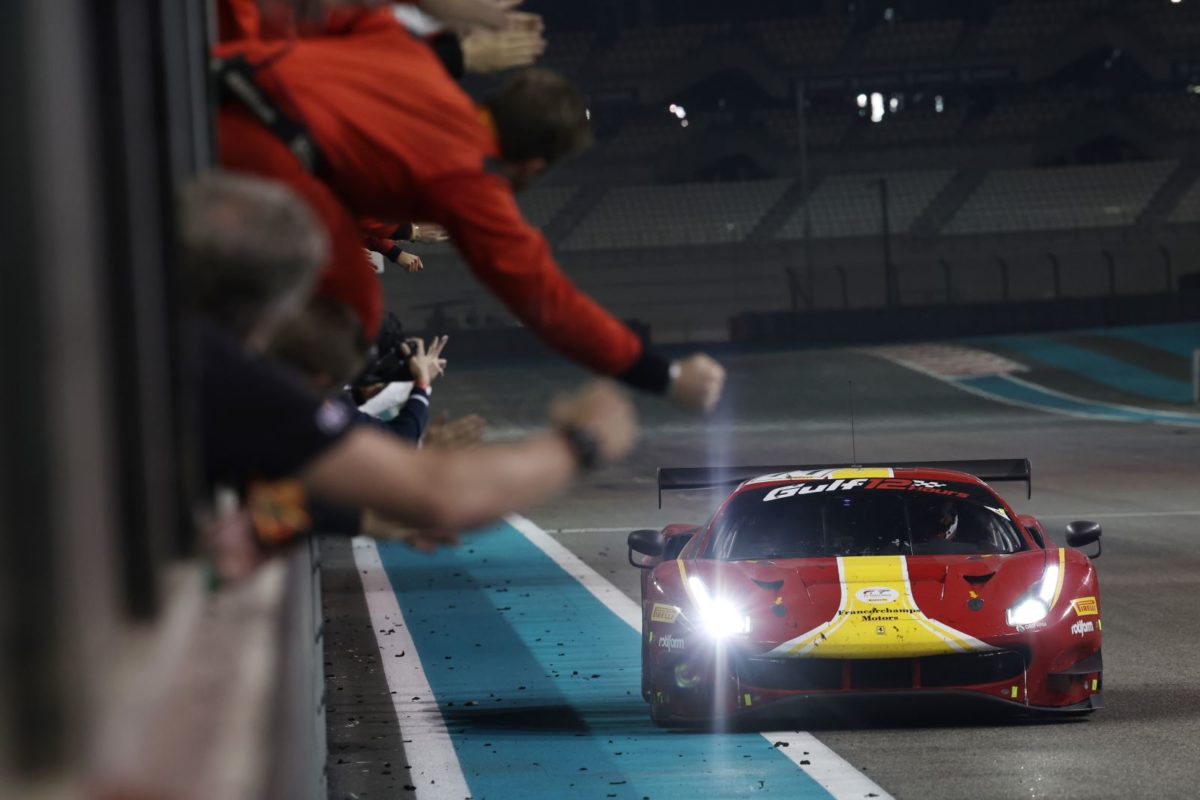 With each car obliged to take 10 Imposed Time Pit Stops, strategy was key to how the contest played out, and the #66 Audi Sport Team Tresor entry of Mattia Drudi/Dennis Marschall/Kelvin van der Linde looked to be the effective leader for much of the race despite rarely being officially first placed.

That was still the case when Marschall, running in third position, made contact with a GT C class Porsche with just over three hours to go, the contact causing race-ending damage to the #66 R8 LMS GT3 Evo II.

From there, the #71 Ferrari was in control, its cause helped by the fact that the #50 Ferrari, which was on a different strategy, had to save fuel during the final hour.

Nielsen therefore came under late pressure from Niederhauser, but was able to make it to the finish line 0.8s clear of the #25 Audi.

Luca Stolz was an outside chance of pinching the drivers’ championship title due to GruppeM’s failure but he needed a win and fourth for the #77 Al Manar Racing by GetSpeed Mercedes-AMG was therefore not good enough.

Kevin and Jan Magnussen, along with Mark Kvamme, claimed seventh outright and fifth in GT3 Pro in the #43 AF Corse – MDK Motorsports Ferrari, with the trio to combine again in January’s 24 Hours of Daytona.