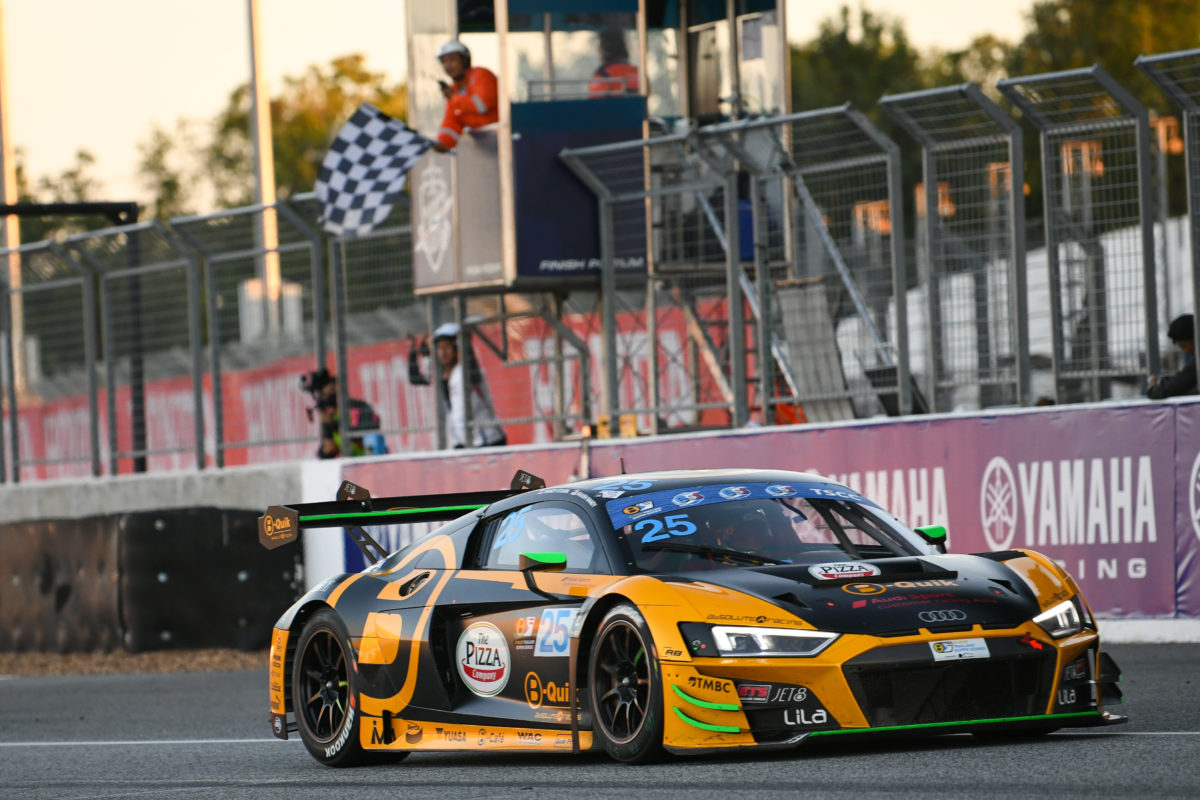 Both the #25 Audi duo of Akash Nandy/Sandy Stuvik and the Am class #27 Audi duo of Daniel Bilski/Philip Massoud put their championships beyond doubt with a race to spare, after high drama befell the #11 Vattana Motorsport Honda NSX in Saturday’s Race 7 of the season.

Nandy had bolted from second spot on the starting grid to a 16-second lead over Vattana’s Andrea Gagliardini by the time he peeled off for his compulsory pit stop.

However, once all the stops had shaken out, Massoud was up by around two seconds from Stuvik, who had another three seconds on Jacopo Guidetti in the #11 Honda.

Stuvik quickly got by the sister #27 R8 LMS GT3 Evo II to put Car #25 back into the official race lead, but Guidetti had also made his way past and was attacking for first position.

As they threaded their way through traffic, the Italian had a dive at Stuvik at Turn 3 and made contact, but the Thai driver held onto the position.

Guidetti would not be denied a second time but, almost as soon as he was into first position, a rear tyre on the Honda became shredded and that was that for the #11 Vattana entry.

Given Nandy/Stuvik led the championship by five points over Gagliardini/Guidetti before the start of the weekend, the victory which they inherited was enough to wrap up the GT3 title with a race to spare in 2022.

Absolute also clinched the teams’ title while Bilski and Massoud sealed the GT3 Am drivers’ crown as the latter finished Race 7 of the season fourth on the road and second in class.

In Race 8, Stuvik swept around the outside of Turn 1 and into an early lead, but one which he ceded at the end of Lap 1 due to a drive-through penalty arising from the previous day.

It meant team-mate Markus Winkelhock in the #55 Absolute Audi assumed first position, one which the German held until pitting at the end of Lap 20.

Once the cycle was done, Asavahame was first in the #28 Lamborghini, from Henk Kiks (#26 Absolute Audi), Vincente Floriendo in the #55 Audi, and Bilski.

Within minutes, both Cars #28 and #26 were issued stop-and-go penalties for coming under their minimum pit stop times.

Just as they took them, Bilski overtook Floriendo and thus it was the Australian who assumed first spot.

He wasted little time gapping Car #55, and would take the chequered flag 25 seconds clear, a margin amassed in just a dozen laps.