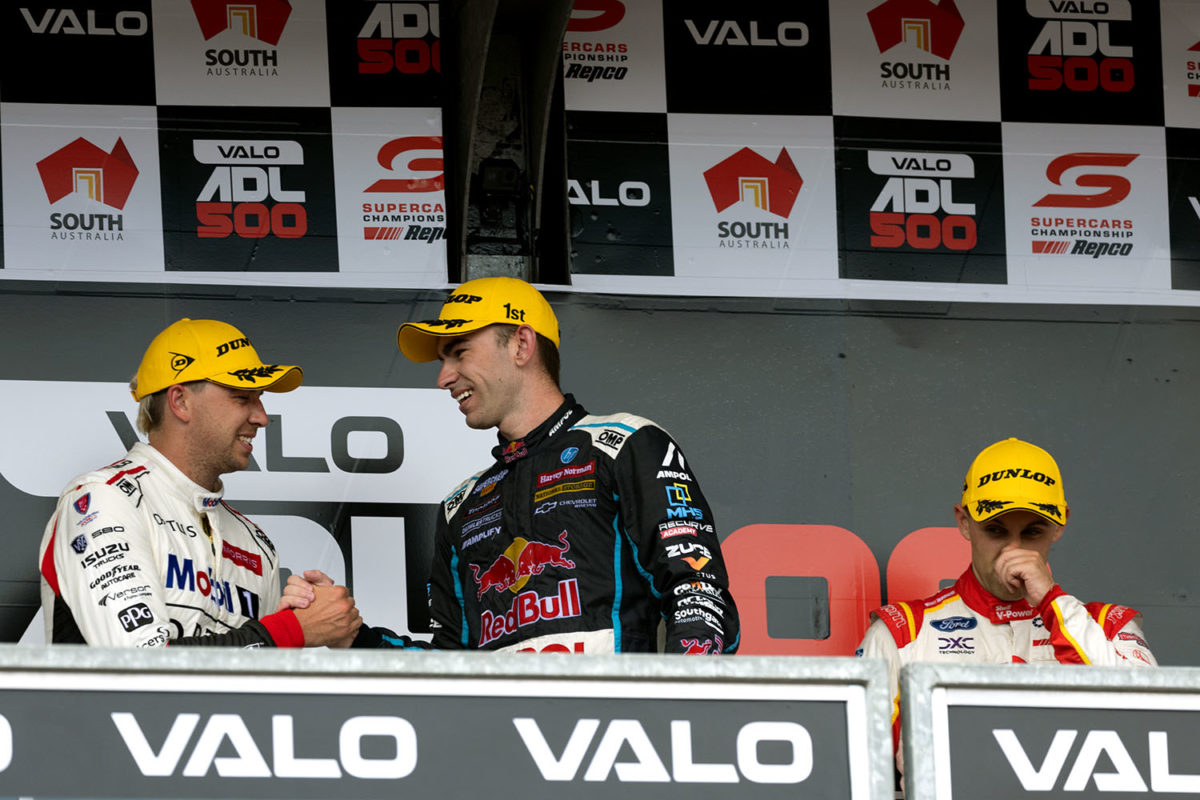 Chaz Mostert was not surprised that Broc Feeney was able to stay ahead of him and get his first Supercars Championship race win in the Valo Adelaide 500 finale.

Feeney and Mostert were first and second placed when the race restarted for a second and ultimately final time with 30 laps remaining around the Adelaide Parklands Circuit.

From there, the Red Bull Ampol Racing driver appeared to managed the gap until the finish, regularly able to add a tenth or two as a means of response when his Mobil 1 Optus counterpart get within one second.

In the end, 0.9643s separated them at the chequered flag after a performance which now former Triple Eight Race Engineering boss Roland Dane likened to that of the maiden win of Feeney’s predecessor in Car #88, one Jamie Whincup.

Dane took the breakthrough victory as vindication of his decision to sign the 20-year-old, quipping, “I don’t look like a dickhead,” but Mostert was hardly shocked by what he had a close-up view of.

“He’s in the sport for a reason, and we like to talk about the Norwell Motorplex and stuff like that,” said the Walkinshaw Andretti United pilot.

“Over the years, [I] popped out there and been in the car beside him before in a Toyota 86 and seen what he’s been able to do behind the wheel.

“So, I knew I had to try and channel my 86 out there to try and catch him but he’s pretty good in those things too.”

While Feeney is the official event winner given the Adelaide 500’s unique emphasis on the latter race of the weekend, Mostert was the unofficial ‘round winner’.

That is, by winning Race 33 and finishing second in Race 34, he scored more championship points in the City of Churches than any other driver.

His victory on the Saturday will go down as one of the iconic moments in Australian Touring Car Championship history, given he and Nick Percat delivered WAU a one-two while driving ZB Commodores adorned in its original Holden Racing Team livery as a farewell to the homegrown marque.

The 2021 Bathurst 1000 winner was thus not to disappointed at coming up just shy of a clean sweep.

“Unreal,” is how he described his weekend.

“I think if you said on Friday that you get to Saturday and Sunday and Holden would win the race, Walkinshaw would win the race and go one-two on Saturday, and then you’d have another one-two with two more Holdens on Sunday, you’d almost think you’d want to buy a lotto ticket.

“We fought really hard, trying to push Broc as hard as I could to the finish line, but when I wake up tomorrow morning, I’ll just purely think about Saturday,” remarked Mostert after Race 34.

“I think that was so amazing for our team to go that one-two.”

Mostert ended the year third in the drivers’ championship after picking up a total of five race wins in the #25 ZB Commodore.