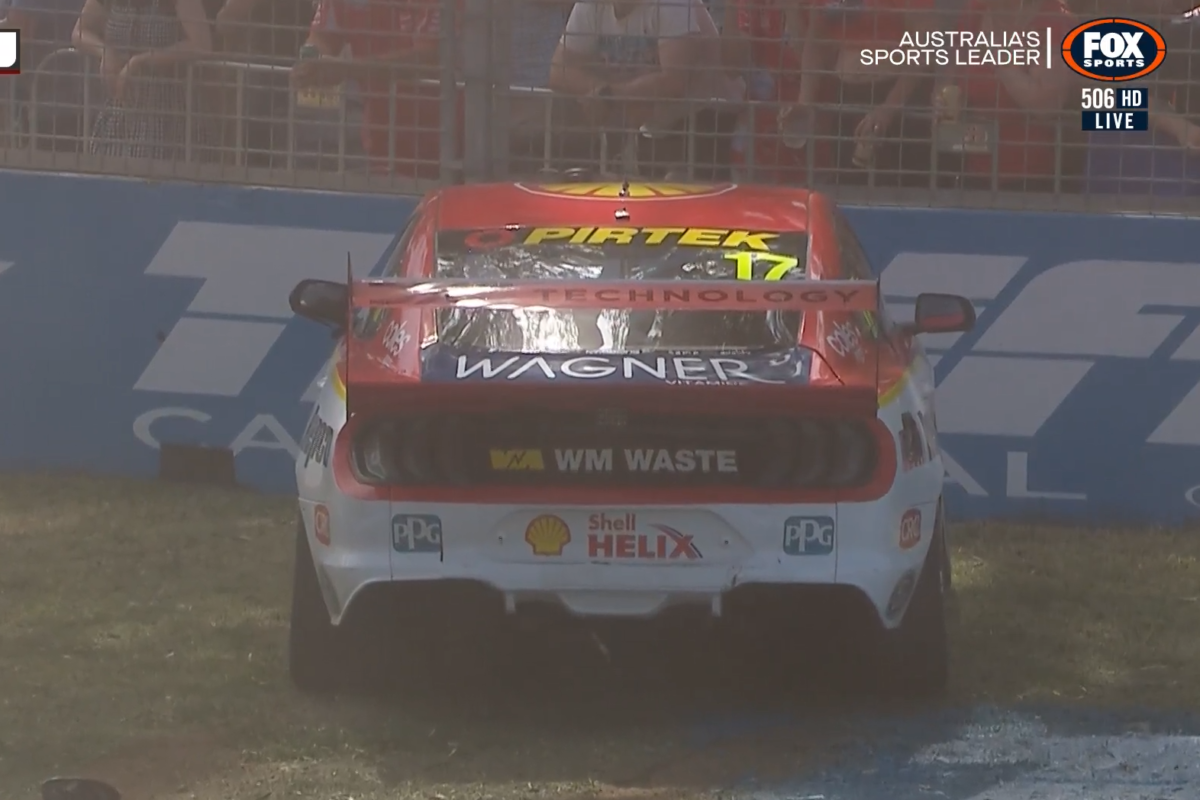 One of three significant Will Davison mistakes in Race 34 at the Adelaide 500. Picture: Fox Sports

Will Davison was apologetic to his Shell V-Power Racing Team after a string of significant mistakes in Race 34 of the Supercars Championship at the Valo Adelaide 500.

Davison handed Broc Feeney what turned out to be a race-winning lead on Lap 24 when he ran wide at Turn 9, but pressed on in second place for 16 more laps.

It was then that he left the road at Turn 11 and hit the tyre barriers, prompting an unscheduled pit stop before resuming near the back of the pack.

Even then, not all was lost when a Safety Car came three laps later and Car #17 emerged in eighth position for the Lap 49 restart.

However, it took less than two laps more for the native Victorian’s race to unravel completely, when he apparently tried to cover Brodie Kostecki at Turn 9 but outbraked himself and clattered into the side of David Reynolds’ Mustang.

Davison dropped to last of those still on the lead lap before being whacked with a 15-second time penalty for Careless Driving which meant that he would be classified 19th at the end of Lap 78.

He noted the difficulties which drivers were experiencing in what were two altogether dramatic encounters on an only recently resurfaced Adelaide Parklands Circuit, but admitted he should have been better.

“Honestly, in 15 years, I don’t think I’ve driven in track conditions like they were, the last two days,” said the 40-year-old on Fox Sports’ post-race show.

“Hot and slick and hugely inconsistent, lap-to-lap; it somewhat feels like oil on your tyres, and if you get a little bit wide, the grip is changing all the time.

“So, to me, I would think I would thrive on that, to not make mistakes, but I’m pushing really hard.

“I haven’t been really quite where we need to be this weekend, so I was giving it everything to finish the year on a high today.

“After yesterday [Race 33], when I made a couple of mistakes, I was really determined not to make any and I just made one after the other.

“So yeah, very, very sorry to the team and to the fans of our team.

“I really wanted to finish this era [Gen2/Car of the Future] on a high but wasn’t to be today.”

The Sunday shocker meant that Davison gave up fourth position in the drivers’ championship to De Pasquale.

It was a poor way to end what was, overall, a season of resurgence for the veteran whose career looked as though it might be over when 23Red Racing closed amid the outbreak of COVID-19 in early-2020.

He broke a drought stretching back to the 2016 Bathurst 1000 with a win at Wanneroo and would make it three for the season in total.

There were also the nine pole positions over the course of 2022, a tally beaten only by Tickford Racing’s Cameron Waters.

“There’s been a lot of positives this year,” declared the two-time Great Race winner.

“So, definitely just a bit of a sour note to finish but heaps of positives.

“We’ll have a bit of a rest and I’ll learn from this.

“It’s something that’ll make me hungry going into next year; I’m not happy with myself.”

Davison’s next Supercars engagement is set to be the Gen3 shakedown for teams based in the Sunshine State at Queensland Raceway on January 30.