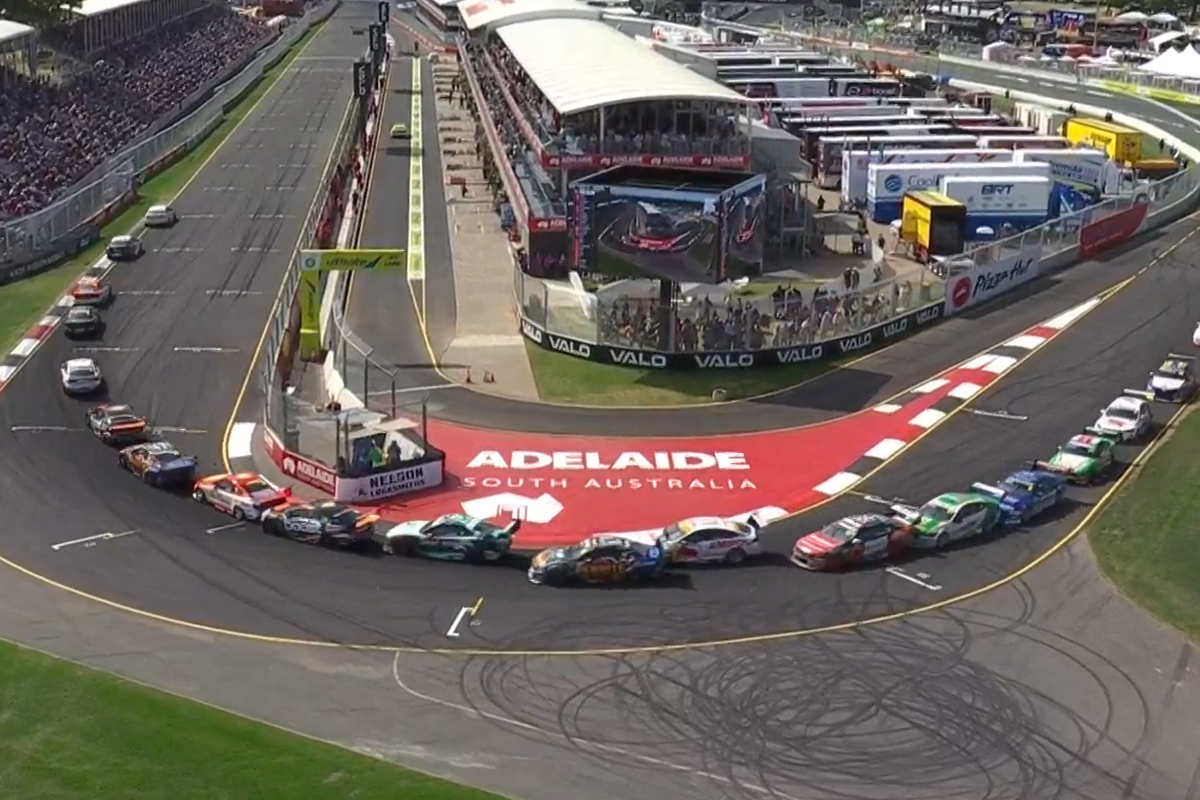 Shane van Gisbergen has picked up a second penalty for a restart infringement. Picture: Fox Sports

Shane van Gisbergen was left “gutted and baffled” after he was handed a pit lane penalty for a restart infringement midway through Race 34 Supercars season at the Valo Adelaide 500.

An opportunistic move by van Gisbergen under a mid-race Safety Car saw the Red Bull Ampol Racing driver overlap Lee Holdsworth as they negotiated the final corner prior to the restart.

There, the Triple Eight Race Engineering driver had appeared to bump the Grove Racing driver, before moving inside the Mustang prior to the apex of the corner.

The Safety Car had been called after Bryce Fullwood lost the back end at Turn 8, clouting the wall heavily with the left-rear on Lap 43. Five laps later, racing was set to resume.

Under the regulations, Rule 10.2.12.2 states that a car “is permitted to overlap with another Car but only after the apex of the final turn.”

In this instance, that was not the case, with officials deeming it a restart infringement.

By the time the penalty had been issued, van Gisbergen had climbed to third, slotting back in to 13th after trundling through the lane.

“I wanted to make it a Holden one-two-three,” the New Zealander said after the race, won his team-mate Broc Feeney.

“When I got into third I was pumped. Pretty gutted and baffled they give us a penalty so much later.

“But now I’m so glad that Holden [finished] one-two and Broc to get his first win in the team, to go out on top, yeah, ripper.”

In the garage, team boss Jamie Whincup was also left confused by the decision to penalise his driver.

“They did an investigation and cleared it,” he explained, during the race.

“Then they decided to reopen it again.

“What’s under question is the overlap at the last corner – the car ran wide.

The incident marked the second time van Gisbergen had felt the wrath of officials in short order.

Following Qualifying, the Kiwi was pinged after he was caught speeding in pit lane.

For that he was fined $350, though there was initially a question over whether he should have maintained his position in the Top 10 Shootout.

He ultimately did, though turned in a lap he was far from pleased with, admitting the ordeal leading up to the single-lap dash left him distracted.

Van Gisbergen finished just 20th in Race 33 in Adelaide after a move on Chaz Mostert, the eventual race winner, went awry and then he hit the barriers on his own later in the piece.

However, he is now officially the champion for the second year in a row, and three times in total, while Triple Eight once again scored the teams’ title also, after winning the Bathurst 1000 courtesy of van Gisbergen/Garth Tander and now the Super2 Series with Declan Fraser.