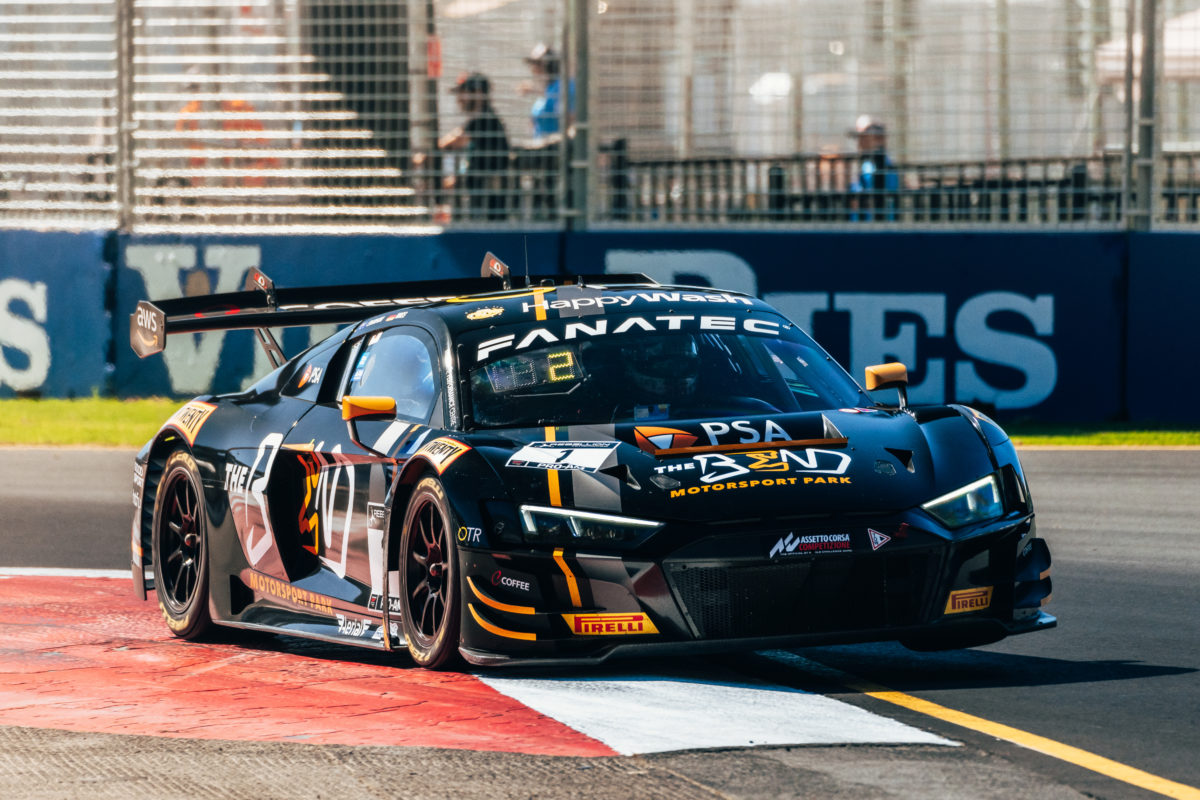 Yasser Shahin has signed off from another championship-winning Fanatec GT World Challenge Australia powered by AWS campaign with victory for him and factory Audi driver Christopher Mies in Adelaide.

Shahin was already the Pro-Am champion-elect before Race 3 of the weekend and Mies brought the #1 R8 LMS GT3 Evo II home in first place despite it leaking fluid upon exit from its Mandatory Pit Stop (MPS).

Fraser Ross and Liam Talbot claimed second in another Audi after the former held off Jamie Whincup in the end, meaning third place for the #88 Triple Eight Race Engineering Mercedes-AMG in which Prince Abu Bakar Ibrahim started the race.

Kelvin van der Linde took the chequered flag in fourth position in Tony Bates’ #24 Audi after having to serve a penalty along the way and then catching an almighty tank-slapper as he attacked Whincup in the closing stages.

The ‘Driver 1’ contingent took the start, with the grid set on the basis of cumulative points from Races 1 and 2, and Talbot (#65 Audi) assumed the early race lead from the inside of the front row.

He led by about two seconds over Shahin, with Bates third and Ibrahim fourth, when a Safety Car was called on Lap 3 of the 40-minute contest.

The reason for the neutralisation was Matt Stoupas crunching the wall at the exit of Turn 9 after the #23 Audi tangled with the #101 Mercedes-AMG of Ross Poulakis as they battled for eighth position.

Green flags flew again at the end of Lap 6, at which point the top four all took the opportunity to peel off and serve their MPS before they got back to racing speed again.

Such were the dwell times, Mies exited the pits comfortably clear of his key rivals, albeit leaving a trail of fluid from the #1 Audi as he drove away.

Whatever the issue was, it seemed little impediment as the German reeled off a string of new fastest laps, and he would lead Audi Sport stablemate Ross by about 13 seconds once the pit cycle completed on Lap 10.

Van der Linde had taken the #24 Audi up to third place by then, and when Ross slid wide on Lap 11 at Turn 5, the South African pounced two corners later and Brett Hobson (#38 Bentley) briefly got ahead of the #65 Audi also.

Van der Linde was 17 seconds behind Mies when he had to cede second place and serve a drive-through penalty for not meeting their MPS time, resuming in sixth position.

Car #24 got some time back when a second Safety Car period was called on Lap 16 after Poulakis spun into the wall at Turn 4 with a flat tyre on his already bruised Mercedes-AMG and did proceed much further.

Whincup had passed Hobson just before the yellows came out and was thus third for Lap 20 restart.

Mies had lost most of his 21-second lead but had two lapped cars protecting him from Ross, and one of them was a genuine hold-up for Car #65.

Van der Linde quickly rebounded to fourth and then caught up to Whincup, who went defensive at Turn 9 on Lap 21.

That led to the South African darting across the track and experiencing a huge slide, but managing to survive.

Mies would cross the stripe with an official margin of victory by 5.6061s after 22 laps, from Ross, Whincup, van der Linde, and the Bentley Continental GT3 of Mike Bailey/Hobson, while Mike Sheargold/Garth Walden (#45 Mercedes-AMG) won the Am class in sixth outright.