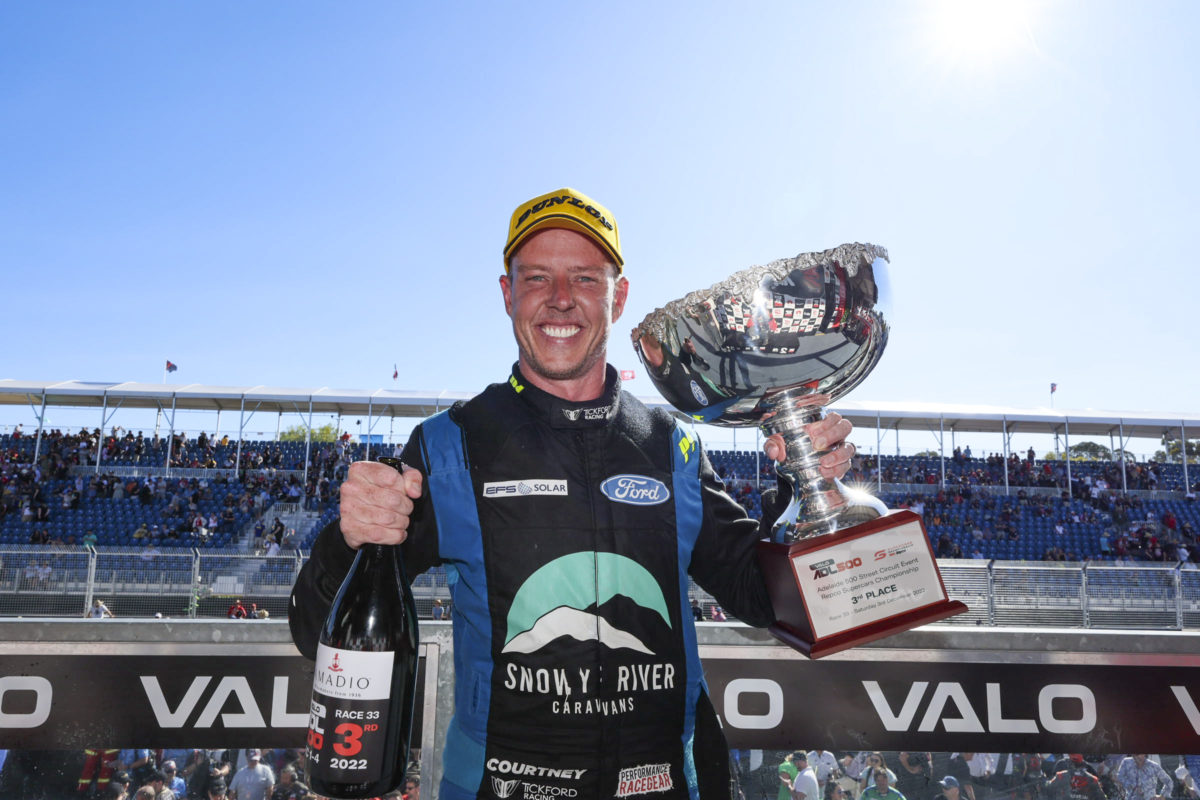 James Courtney admits he too was emotional despite being consigned to the bottom step of the Valo Adelaide 500 podium by Walkinshaw Andretti United’s one-two.

Courtney finished third in Race 33 of the Supercars Championship, behind Chaz Mostert and Nick Percat after a crazy 78-lap encounter on the streets of the South Australian capital.

It looked like he might run down Percat during the run home, but there would be no spoiler to the one-two for the old Holden Racing Team, running this weekend in its 1990 retro livery.

Courtney in fact spent nine full seasons at WAU, including the first six when it was the HRT, plus an enduro campaign in 2005 in the iconic red Commodores.

He too recognised the significance of the moment, including the fact that the former factory Ford team rounded out the top three, although he could not resist a little jab about his own victories in Adelaide.

“My wins here for the team were much better,” joked the 42-year-old.

“No, it was weird; I was quite emotional about it.

“You know, 10 years with Ryan and Martine [Walkinshaw, co-owners] and that whole crew and I got out and Ryan was the first guy I went up to and congratulated him, and then I saw Bruce [Stewart, Team Principal] and whatever.

“I know how much it means to those guys.

“I would have loved to have done that [one-two] as well; Garth [Tander] and I did, at Townsville, but it wasn’t as special at Townsville as what it is here with the event going on – and I was always second, which was annoying,” he laughed.

“But it’s special, and it’s great that the last podium is the two factory, historic teams, the ones that started it out, so that’s pretty cool.

“It would have been cooler if it was Cam [Waters] and I up there – especially if I was ahead of him – but no, it’s quite fitting, really.”

It was an emotional time for reasons more than just sporting for the veteran, whose six-week-old son Kobe was hospitalised and underwent surgery after falling ill in the week prior.

Courtney arrived late to Adelaide, missing the track walk, and admitted it was difficult to leave his family for the weekend.

“I always had to come because I have to put food in his mouth,” quipped Courtney.

“It’s been a hell lead in. Personally, it’s been something I’ve never have to deal with before.”

“It was hard leaving,” he added.

“The good thing about it is that everything changed so quickly, and kids recover.

“When the surgeon said we’d see results within 24 hours, and within 48 hours you won’t even see the incision where they went in, I thought he was talking a bit of crap, but because they are so small and growing, they just recover so quickly.

“He started putting on a good amount of weight and we’re out of hospital. Leaving was easier for me than it was for [wife] Tegan. She’s at home still and going to get the checks at hospital and stuff.

“I don’t want to think about if it happened the other way around.”