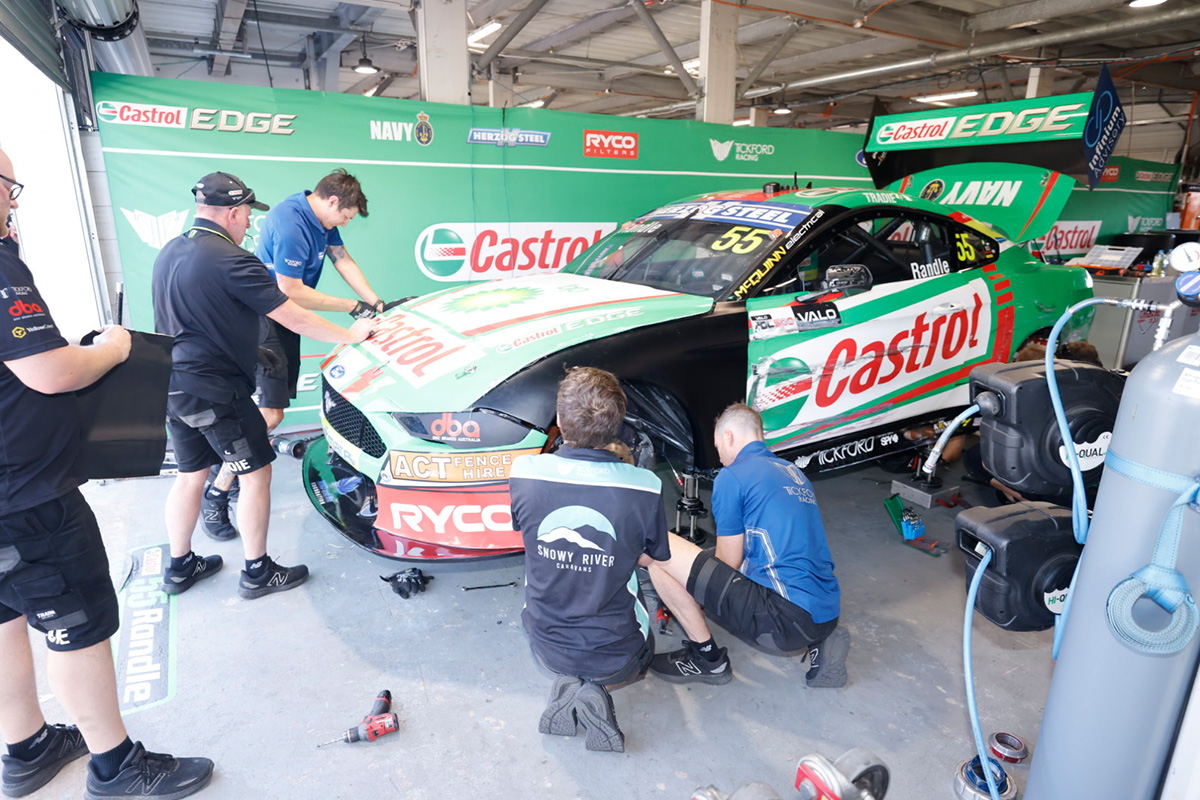 Repairs on the #55. Picture: Ross Gibb

Thomas Randle missed Saturday’s Top 10 Shootout at the Valo Adelaide 500 after a heavy crash in the practice session.

UPDATE: Tickford managed to repair the car, though did not make it to pit exit at the required time, per the regulations, to take part in the shootout.

The Tickford Racing driver found the wall at Turn 8 late in the 30-minute encounter, leaving his #55 Ford Mustang with significant damage.

Earlier in the weekend, Randle topped Practice 1 and earned a berth in today’s Top 10 Shootout.

Tickford team boss, Tim Edwards, confirmed the squad is aiming to get the car ready for this afternoon’s 250km race.

Despite suffering damage to the rear section of the chassis, Randle is still expected to start the race from 10th.

“The focus is on getting it ready for the race,” Edwards told Speedcafe.com.

“He’s qualified in the top 10 so worst case is he is starting 10th but unfortunate because you always want to be in the shootout.

“It’s sad because he has had really good pace all weekend and so the goal is get it fixed and get him back out there for this afternoon’s race. 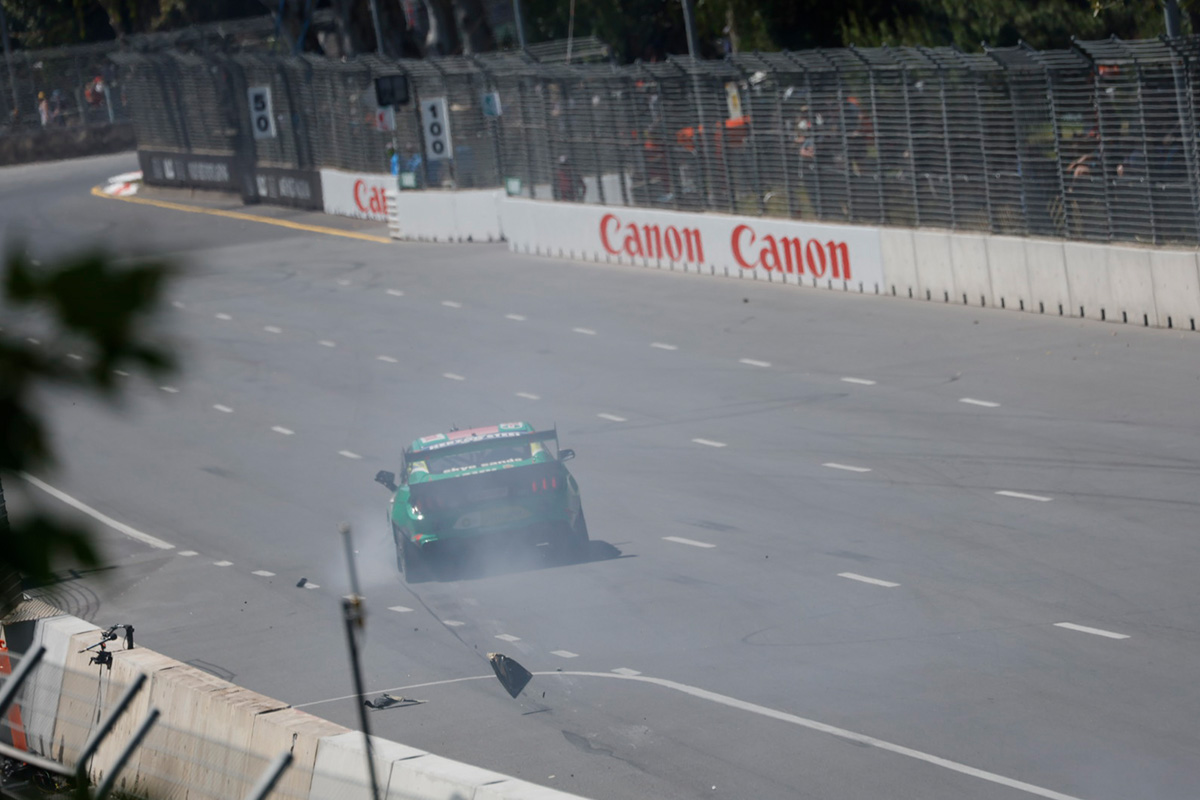 Even with the incident, Randle finished fifth-fastest in the session ahead of Tickford team-mate Cam Waters, while Chaz Mostert was on top.

The car slapped the concrete wall on driver’s left, and while the most obvious damage was in the left-front, the rear of #55 needs the most attention.

“Unfortunately, it’s got some bent bars in the back so we’ve got to cut some of the birdcage out and replace that, so that’s what will hold us up and stop us getting into the shootout,” added Edwards.

“There’s a lot of damage in the front as well, but the biggest thing is it has ripped bolts out so we’ve got to try and extract the remaining bolts and that always takes time.

“The front is quite robust, the chassis rails and engine in the middle, it’s quite strong.

“It’s the rear that’s … because it’s not quite as strong, the birdcage, so it’s easily damaged.”

Randle explained the incident on the broadcast.

“Disappointed for the team and pretty pissed off with myself,” he said.

“As I went through Turn 8, I just tried to carry too much speed and I’ve understeered and got off-line.

“The line is so thin there, so once you’re off-line it’s game over and as soon as I knew that I just got on the brakes to try wash off as much speed as possible.

“I put the wheels straight to minimise the lock up not washing off as much as you want and that impact felt fairly significant.

“It felt like a nightmare. It’s going to be touch and go [to repair].” 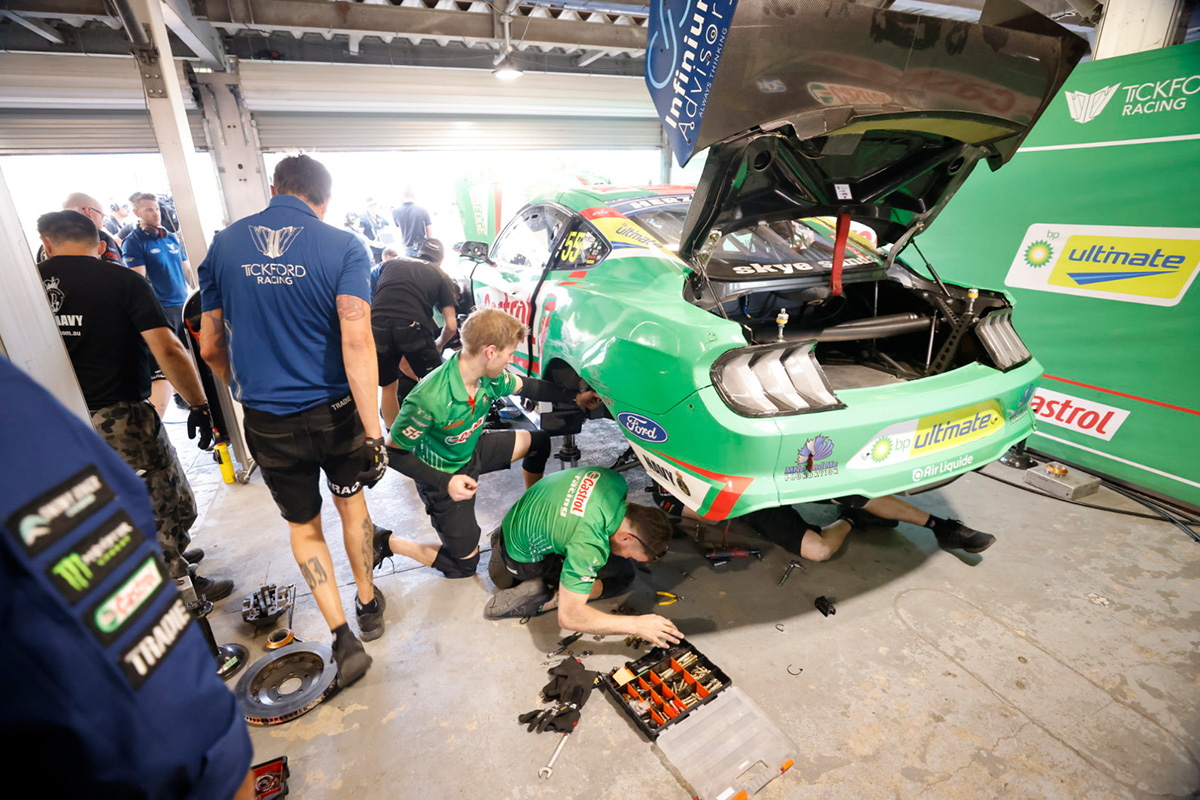