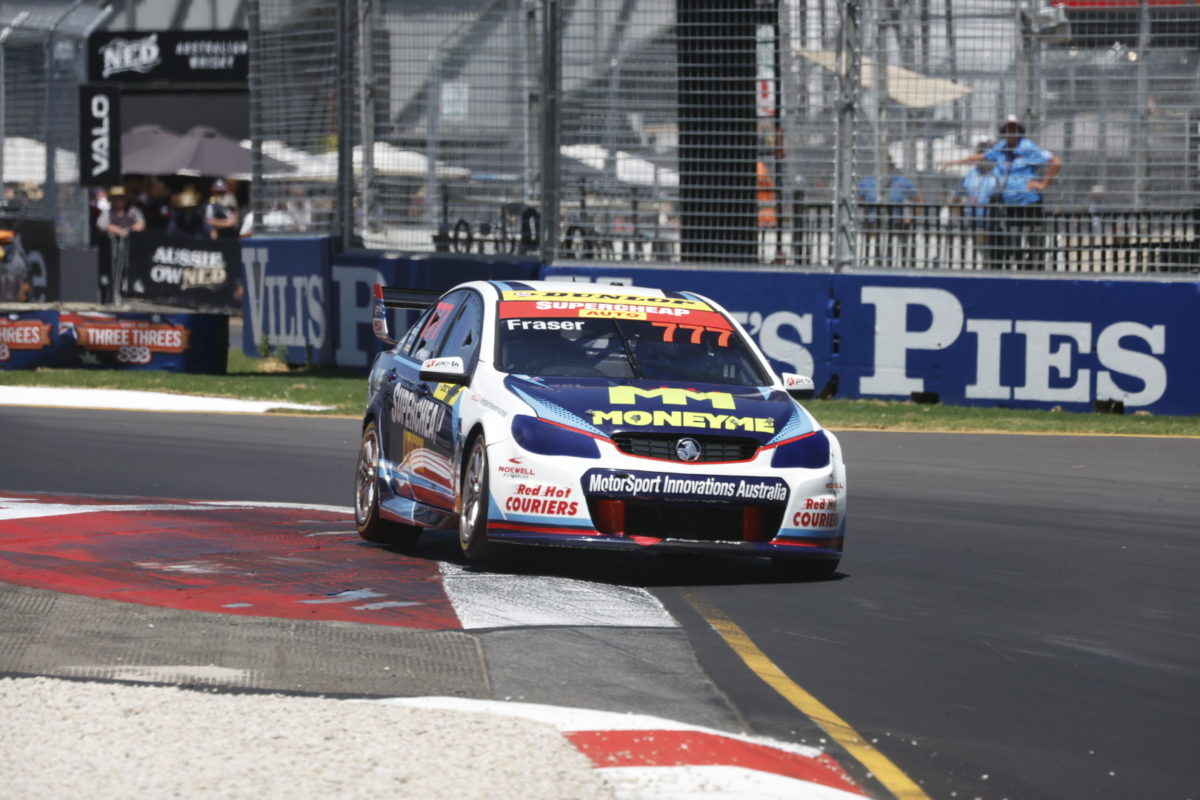 Triple Eight Race Engineering’s Declan Fraser has extended his Super2 Series lead with victory under Safety Car in Race 1 at the Valo Adelaide 500.

Fraser now leads Tickford Racing’s Zak Best by 105 points with one day remaining in the 2022 season after he converted pole position into an all-the-way win, staying clear of the messes which unfolded in the pack at the Adelaide Parklands Circuit.

Grove Racing’s Matt Payne is the other remaining mathematical title hope after he finished second to the #777 VF Commodore, from Triple Eight’s Cameron Hill, Best, and MW Motorsport’s Tyler Everingham.

When the lights went out, Fraser got the jump and headed the field through the opening corners, from Payne (#10 Nissan Altima), Best (#78 FGX Falcon), Hill (#111 VF Commodore), and Everingham (#27 Nissan Altima).

Matt Chahda (#18 Matt Chahda Motorsport FGX Falcon) had qualified sixth-fastest but lined up ninth due to a grid penalty, then quickly jumped back to sixth when he started strongly and passed Jaylyn Robotham (#999 Image Racing VF Commodore) at Turn 5.

Fraser gradually crept to more than a second clear of Payne until a Safety Car was called on Lap 6 due to a wild incident between Aaron Seton and Cameron Crick (#38 Eggleston Motorsport VF Commodore) at Turn 6 as they battled for 11th.

Crick showed the nose, making contact which caused the #30 Matt Stone Racing VF Commodore to spin into the tyre barrier, the heavy rear-end hit picking it up off the deck before landing with a thud.

Officials investigated the collision during the Safety Car period, opting to take no further action.

When the race restarted on Lap 12, Fraser left it late to accelerate but Payne was wise to it and stuck with the #777 VF Commodore.

Chahda passed Everingham at Turn 9, only for the MWM driver to dive back down the inside at Turn 14, taking both wide and allowing Robotham to snatch two positions in one fell swoop.

On Lap 13, Crick spun around the back of the top 10 at Turn 6, then Chahda rotated at Turn 7, possibly after contact from Maxwell, whose #3 Nissan Altima appeared to be sporting even more battle scars than it had done moments earlier.

Drivers continued to jostle for position until the Safety Car was called again to bring a halt to it all, by which time Fraser had moved to a lead of almost 0.8s again.

Time-certainty meant that Lap 14 of a scheduled 19 would in fact be the final lap, with Fraser collecting another 150 precious series points.

Vaughan finished 11th outright, one position up on the man who he is trying to run down the for the Super3 title in Kai Allen (#26 Eggleston VE Commodore), with Chahda classified 13th but Mouzouris and Crick DNFs due to damage they incurred on Lap 13.

Lochie Dalton (#8 Brad Jones Racing VF Commodore) crossed the line 10th in his first Super2 race but was relegated to 21st due to a 15-second penalty for a driving infringement.

The final race of the season gets underway tomorrow at 13:25 local time/13:55 AEDT, with Fraser again set to start from pole.