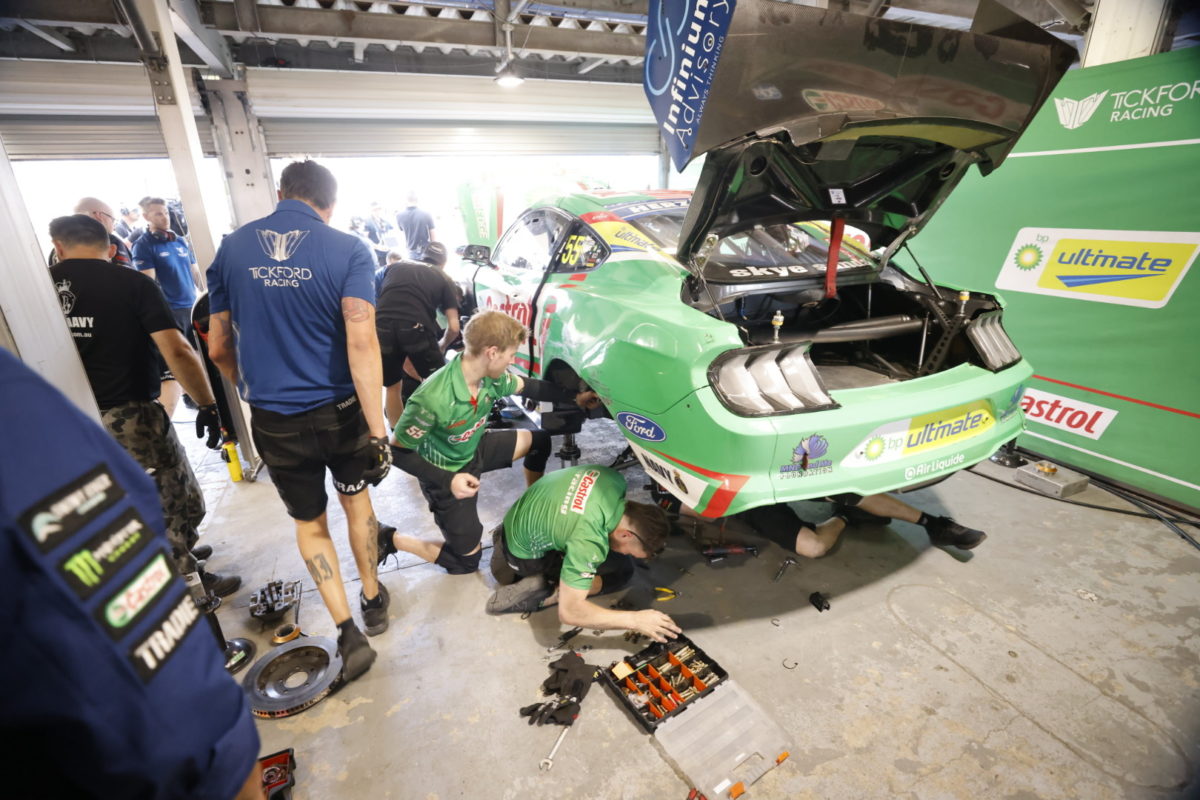 Supercars Head of Motorsport Adrian Burgess has outlined why Thomas Randle was not allowed to take part in Saturday’s Top 10 Shootout at the Valo Adelaide 500.

Randle crashed heavily at Turn 8 in Practice 3, just over an hour before a Shootout in which he was supposed to be first onto the race track having provisionally qualified 10th for Race 33 on the afternoon prior.

The incident left Tickford Racing in a rush to try and repair the #55 Castrol Mustang in time for the rookie to take part in the session, one which fell just short.

The car was coming off its incompressible jacks in the garage around the official session start time of 12:35 local, at which time Tickford Team Principal Tim Edwards was seen in what appeared to be a cross exchange with Burgess.

Car #55 would not be allowed to exit the pits, and hence Randle missed out on a chance to improve on his provisional starting berth of 10th position.

According to Burgess, Supercars in fact asked stewards to make allowances for Tickford, but they were not granted.

“We feel for them; it’s nothing we want to see but we were in the hands of the stewards running the event,” he explained on the television broadcast.

“Unfortunately, the rule is pretty clear; you have to be at pit exit for the start of your run.

“Another minute and they would have been there.

“We tried to get a little bit of leniency, allow them to be rolling to pit exit, but we weren’t given that and the rule is pretty black and white, unfortunately.

“You need to be there ready to go at the start of your run.”

The rule in question comes under the ‘Top 10 Shootout Procedure’ section of the Supercars Operations Manual.

Rule D6.3.7.2 states, “The Car nominated to start the Session must be at the Pit Exit at the scheduled start time of the Session.”

Edwards said, post-session, “Obviously he had the accident in practice and it was quite a bit of damage.

“To be honest, we didn’t even think we were going to get out for the Shootout but then the guys have done what they’ve done so many times this year; they just pushed.

“We were very close and, unfortunately, you’ve got to be at the pit exit as the session starts; we were about 10 seconds away.

“Normally, you get a 30-second window to get down there, but when you’re the first car unfortunately we didn’t quite make it by 10 seconds.

“Given what the team had achieved in that 50 minutes, it was amazing and pretty disappointing for them that they weren’t able to get the rewards of all the effort they put in.”

In a not insignificant consolation for Tickford, Cameron Waters converted fifth after Friday afternoon’s qualifying session into pole position for the #6 Monster Energy Mustang.

Asked if the call on Randle was too tough, Edwards responded, “I will always have my view, you know?

“Personally, I am all about the show; I think the show missed out there. Different people have different views.

“It’s just gut-wrenching for the team after the effort they put in to get that car out. They’ve had to do it so many times this year — at the Gold Coast with JC [James Courtney], nobody thought we would get that car back out and we did and he finished.

“He actually bizarrely finished ninth for the round, so it just shows they were rewarded for the effort in that situation and they weren’t today.

“That’s why we pushed all those Castrol guys front and centre in that photo we just took with Cam for the pole position car, because everything we do is a team effort.”