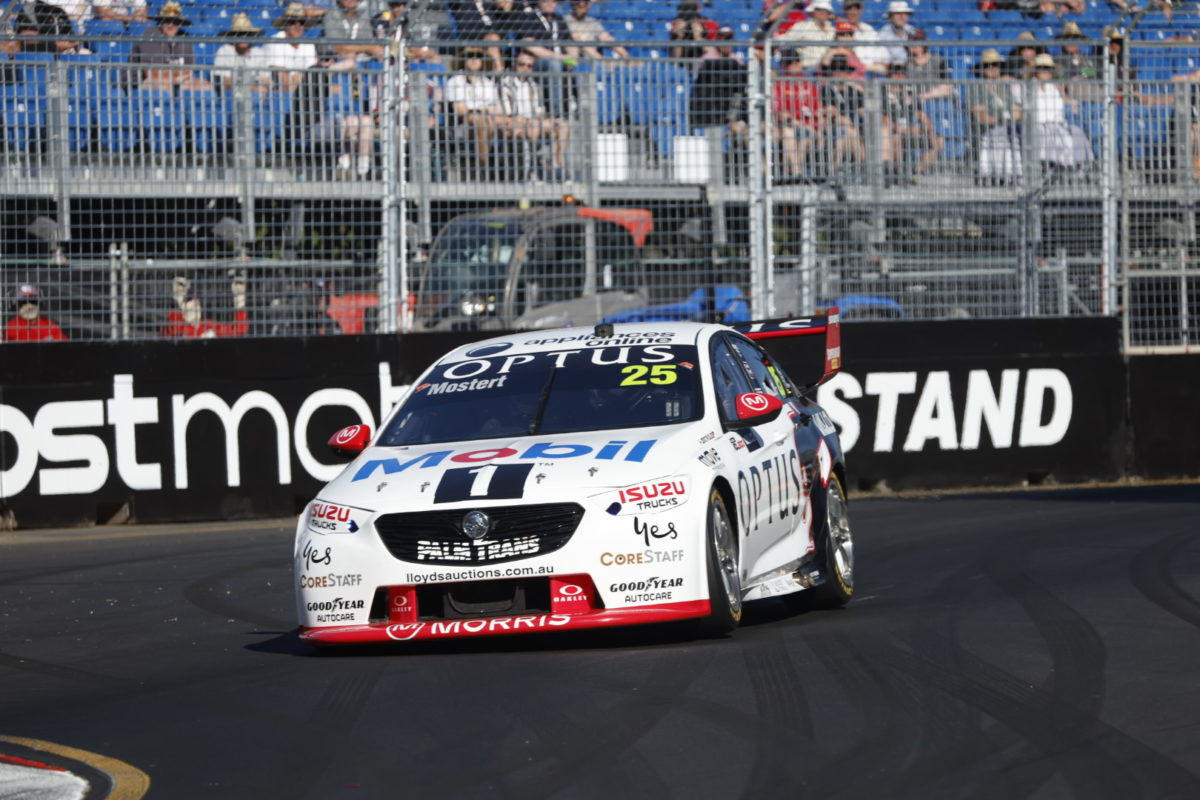 Chaz Mostert is on provisional pole position for Race 33 of the Supercars Championship at the Valo Adelaide 500 while Shane van Gisbergen will start last after a late off.

Van Gisbergen looked on to set the first ‘18’ of the weekend but locked up at the final corner of the Adelaide Parklands Circuit and only got back on the bitumen with about a minute remaining in the 15-minute session.

That was less time than he needed to start another lap before the chequered flag came out and, with the #1 Red Bull Ampol ZB Commodore 25th-quickest at the time of the off, the champion-elect was locked in to the 13th and final row of the grid for tomorrow afternoon’s 78-lapper.

READ MORE: van Gisbergen ‘pissed off’ with himself

Walkinshaw Andretti United’s Mostert, however, topped Qualifying for Race 33 in the #25 Mobil 1 Optus ZB Commodore with its 1990 Holden Racing Team livery, by a margin of 0.1330s over Anton De Pasquale.

With the session getting underway late in the afternoon and thus temperatures dropping around the Adelaide Parklands Circuit, it was expected that the pace would be up.

Mostert was third at the time on a 1:19.3209s while van Gisbergen, who apparently aborted his second push lap after picking up a kerb hop at Senna Chicane, sat 24th.

Heimgartner went relatively early for his second run and vaulted back into provisional pole on a 1:19.1436s, faster than van Gisbergen had gone when he set a new practice record earlier in the day, before Todd Hazelwood (#35 Truck Assist ZB Commodore) went second on a 1:19.1864s.

With less than two minutes to go, Thomas Randle (#55 Castrol Mustang) moved to third on a 1:19.2011s as van Gisbergen ended up in the green stuff at Turn 14.

With the chequered flag out, Scott Pye (#20 Toyota Forklifts ZB Commodore) made his spot in the shootout safe with a 1:18.8233s which moved him up from eighth to as high as second place.

De Pasquale was still fastest until he was denied by Mostert, meaning Car #11 will be second-last out for the shootout before Car #25 brings a close to the one-lap dash.

Rounding out the top 10 were Pye in third, from Courtney, Waters, David Reynolds (#26 Penrite Mustang), James Golding (#31 Subway ZB Commodore), Heimgartner, Hazelwood, and Randle, the latter of whom clung on to a shootout berth with that 1:19.2s.