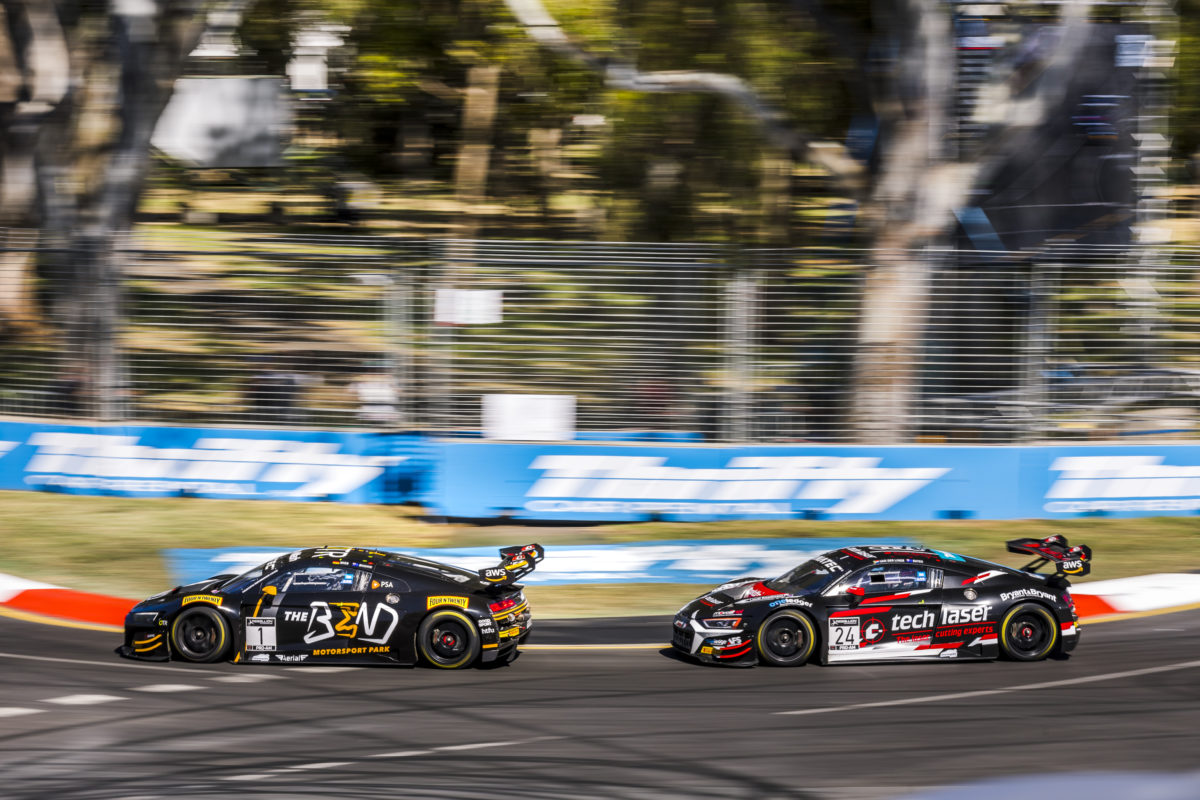 The battle for victory became a dogfight between the two factory Audi drivers in the second and final stint, with Mies and van der Linde trading paint along the way.

In the end, the #1 Audi Sport Customer Racing entry prevailed over the sister #24 R8 LMS Evo II, in which Tony Bates had started the race, by just 0.3336s after 27 laps.

Liam Talbot/Fraser Ross claimed third in the #65 Audi, while Jamie Whincup had to pull into the pits from fourth with a late mechanical drama, meaning a DNF for him and Prince Abu Bakar Ibrahim in the #88 Triple Eight Race Engineering Mercedes-AMG GT3.

Shahin therefore extends his Pro-Am championship lead over Talbot, who moves into second in the standings, while Prince Jefri Ibrahim’s title hopes have been dashed after the #888 Triple Eight Mercedes-AMG GT3 was a non-starter following his qualifying crash.

Talbot had earned himself pole position for the 40-minute encounter and it was indeed the #65 Audi which led the field away when they took the green flag in what was officially the fourth minute of the race.

He pulled a full second clear of Yasser Shahin at the end of the official first lap, and was two seconds to the good after Lap 2.

Talbot stretched his gap past five seconds on Lap 8, as Bates continued to run third despite a brush with the Turn 8 wall and Ross Poulakis (#101 Mercedes-AMG) in fourth despite bouncing across Senna Chicane.

Abu Bakar Ibrahim sat fifth, 30 seconds from the lead, when he was among the first into the lane for his compulsory pit stop and handed over Car #88 to Whincup.

Talbot stopped a lap later, his 10th around the Adelaide Parklands Circuit, and Bates followed him into the pits, but Yasser Shahin pressed on until the end of Lap 12.

Nevertheless, Mies emerged with the effective race lead in the #1 Audi from Ross in the #65 Audi, who was being hunted down by van der Linde in the #24 Audi.

He held off van der Linde when they arrived at Senna Chicane on Lap 14 but the South African then dived past eight corners later, at the end of Dequetteville Terrace.

Van der Linde faced a four-second deficit to Mies, who was by then the official leader due to the completion of the pit cycle, but slashed that to less than a second over the next two laps.

Car #1 continued to hold first position as they threaded their way through traffic and, once in clear air, Mies set a new fastest lap on Lap 18, only for that marker to be knocked off 0.8877s later by van der Linde.

They made contact two laps later at Turn 9, with van der Linde taking to the inside kerb to avoid a bigger hit as Mies fended him off.

There was another heart-stopping moment for the top two on Lap 22 when Paul Stokell (#2 Audi) turned around the #47 Audi of Theo Koundouris just in front of them at Turn 4, but they emerged unscathed that time.

Still, Mies was soon more than a second clear, only for van der Linde to reel him back in such that they were nose-to-tail, and again negotiating traffic, on what would be the final lap.

The German had to go defensive at Turn 9 and then had a wicked slide through Turn 11, appearing to brush the wall on exit, but hung on for victory.

Behind he and van der Linde was Ross at more than 13 seconds back, while Poulakis won the Am class in fourth outright even after hitting the wall on the way into the pits for his stop.

UPDATE: Poulakis 10-second post-race penalty, possibly for cutting chevron on way into pits, but maintains fourth outright and first in Am class

Stokell finished fifth outright in the #2 Audi which he is co-driving with Gary Higgon, while Brad Schumacher/Sergio Pires (#55 Audi) won the GT Trophy class in sixth outright.

Whincup had been running a distant fourth before he pitted with four laps to go, with radio transmission suggesting low oil pressure, although whether the issue was a consequence of his own qualifying crash earlier in the day is unknown.