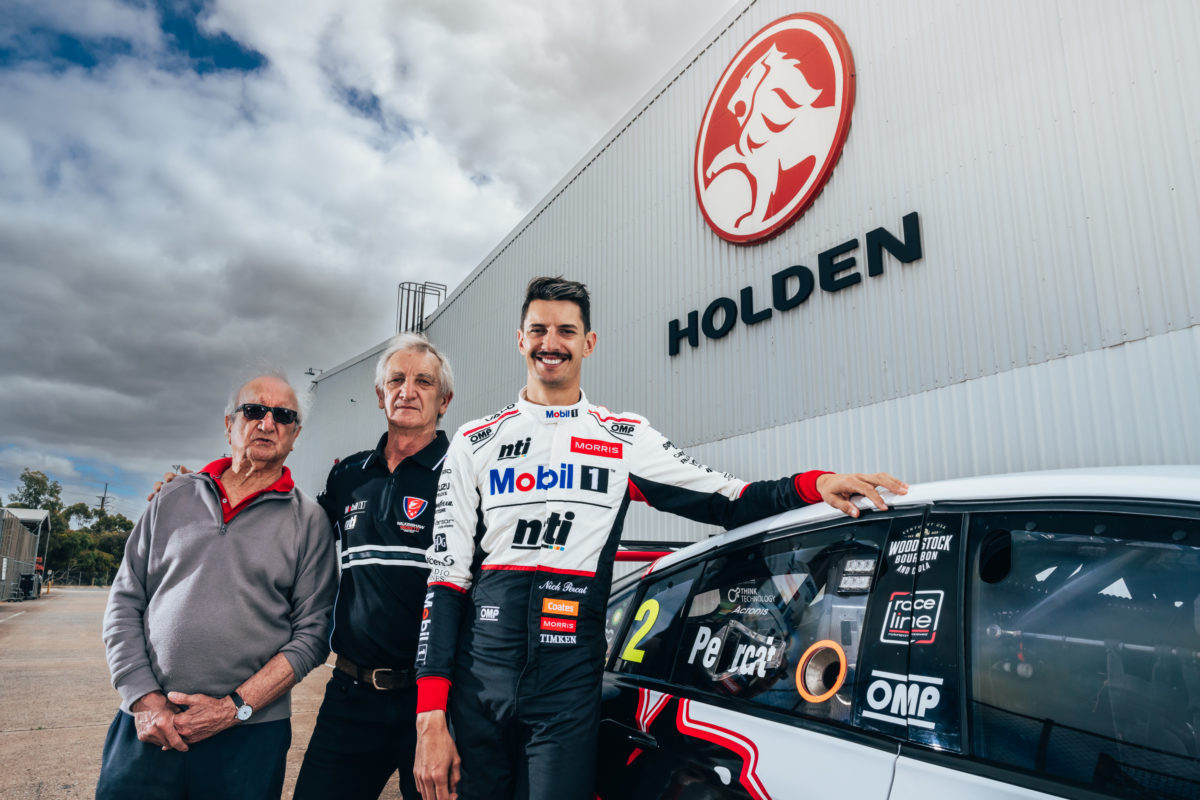 Nick Percat with his father and grandfather at their former workplace, the Holden plant in Elizabeth

Nick Percat, a South Australian native born to a third-generation Holden worker, says a podium at this weekend’s Valo Adelaide 500 would mean more than winning the Bathurst 1000.

Percat will have the honour of driving with an early-1990s Holden Racing Team livery on his Mobil 1 NTI ZB Commodore in Walkinshaw Andretti United’s final Supercars Championship event with the famous Australian marque.

Not only will the Chevrolet Camaro replace the ZB Commodore when the Gen3 era begins in 2023, WAU, the former factory team, will switch from the General Motors side to field Ford Mustangs.

Fittingly, circumstances have transpired such that Holden’s last Australian Touring Car Championship event will be held in the city which it can unquestionably call home.

Not only did James Alexander Holden open the saddlery business which would morph into the car company in King William Street, just over a kilometre from the Adelaide Parklands Circuit, in 1856, it was in Elizabeth, in the city’s north, where General Motors Holden built cars until the assembly line fell quiet on October 20, 2017.

On February 17, 2020, General Motors announced that the brand would be retired altogether, save for aftersales.

Percat won the Bathurst 1000 in a factory VE Commodore in 2011, but his connection to the marque runs much deeper than that triumph with WAU in its days as the Holden Racing Team.

He is also the son, grandson (twice over), and great grandson of men who worked in the Elizabeth plant.

The 2022 Supercars season finale was therefore always going to carry immense significance for the 34-year-old, but even more so considering it is the first Adelaide 500 since it was axed by the previous state government and then revived by the current administration, after advocacy from race fans and South Australians such as Percat himself.

“For me, if I stood on the podium or won it, honestly, it’d be bigger than winning Bathurst,” he told Speedcafe.com.

“Because, what it means my family here in Adelaide, the effort that went in to get this event back…

“You know, I stuck my neck out quite a lot, and took a bit of scrutiny about what I was saying about trying to get this event back, so there’s that side of things.

“There’s the Holden part, with the last time we drive the cars, and then obviously being with this team as well.

“It would mean a lot to get a big result in front of the home crowd and at my home track.”

WAU today pulled the covers off its two ZB Commodores on the main straight of the Adelaide street circuit, after a special photoshoot at the site of the Elizabeth Holden plant, now the ‘Lionsgate Business Park’, the day prior.

It was there that Percat was able to share the moment with his father and grandfather.

“My great granddad, granddad, dad, on dad’s side, obviously all worked at the Elizabeth plant and so did my own mum’s dad as well, so, a long, rich history in Elizabeth there, building cars,” he noted.

“I think granddad was saying yesterday when we were there that the FJ roughly was about the first car he was involved in – I’m not sure about my great granddad – but, very cool.

“Yesterday was really nice. We obviously took photos there and it was cool to get him along.

“We went for a little bit of a walk around the plant, or the business park, and it was good memories for him.

Percat does have a race win in the Adelaide 500, in a rain-hit affair back in 2016 with Lucas Dumbrell Motorsport.