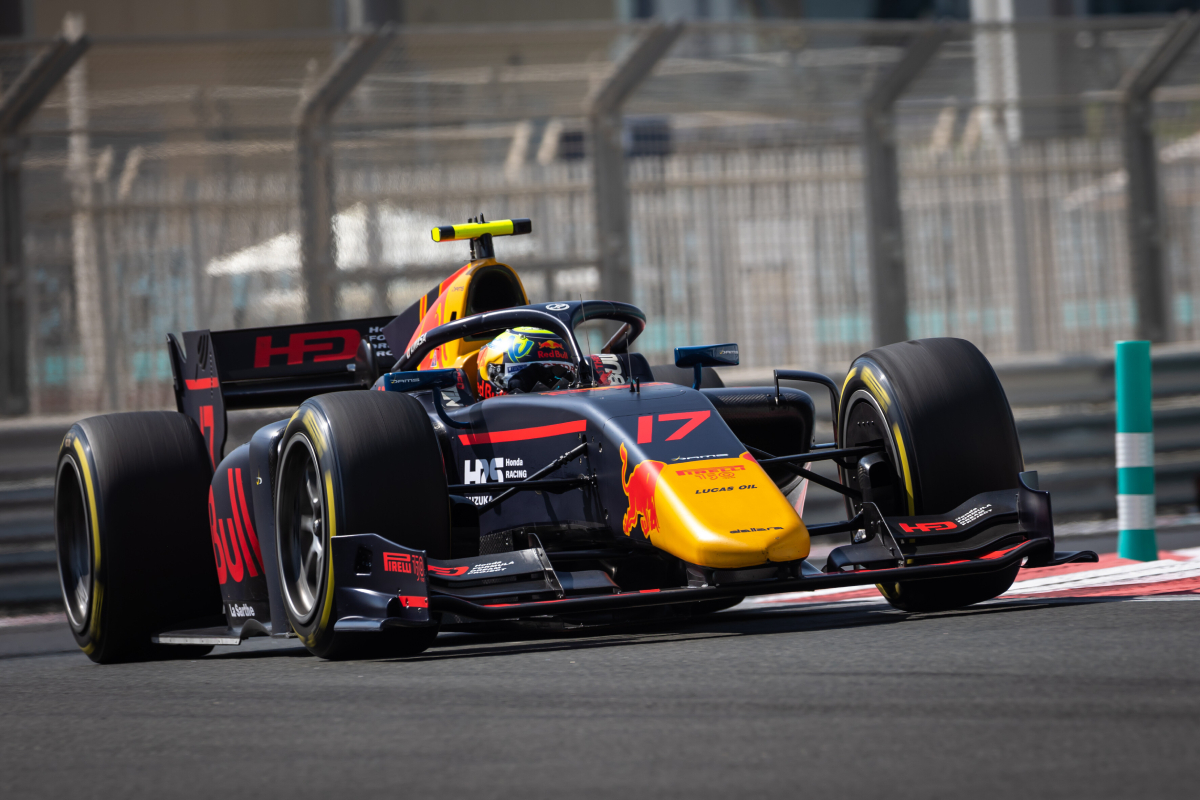 Ayumu Iwasa has won the last Formula 2 Feature Race of 2022 after a scintillating last-lap battle with champion-elect Felipe Drugovich in Abu Dhabi.

The podium was completed by Drugovich and Liam Lawson, who took his second podium of the weekend.

Iwasa sat on pole position for the last race with his team-mate Roy Nissany creating a DAMS front row lockout.

Both got a good start, Nissany took the lead into Turn 1 but Iwasa swiftly took it back in Turn 3.

It was a frantic first lap with Ralph Boschung spinning into Turn 9, which brought out a Virtual Safety Car.

Drugovich made up two positions into third, boxing on Lap 10 before nearly slithering into the back of Iwasa after missing his breaking point and locking up on Lap 14.

He was under pressure from Lawson, but the Carlin driver couldn’t make a move stick and followed Drugovich to finish third at the chequered flag.

Logan Sargeant in the other Carlin car had a very clean race, his focus fixed on scoring the necessary points for a Super Licence. He overtook Nissany on Lap 30 and finished his race in fifth.

Doohan was the first runner of the alternate strategy on mediums, and led the race with solid speed at the time of his stop.

The Australian jumped into the pits on Lap 26 for a new set of soft tyres but lost the front-left wheel on exit of the pit lane.

It forced him out of the race with the incident to be reviewed by officials.

Theo Pourchaire was battling with Dennis Haugher in the Prema car for much of the race, aiming for fourth position as he was looking for much-needed points for the teams’ championship.

But the ART driver retired on Lap 30, bringing out a second VSC as he stopped on track, Haugher finishing in fourth position.

Marcus Armstrong had the black and white flag waved at him for exceeding track limits out of Turn 1, and was given a five-second penalty after picking up four warnings for track limits on Lap 20.

Olli Caldwell brought out a third VSC when he climbed out of his car on the penultimate lap, meaning both Campos cars did not finish the Feature Race.

At the conclusion of that VSC, a tense battle developed between the top two, Iwasa and Drugovich, until the chequered flag.

Drugovich looked to overtake the DAMS driver at Turn 12, but Iwasa defended that move to win the Feature Race.

The Brazilian was then forced to take the outside line and went off the road on the final lap, finishing on the second step of the podium.

Carlin jumped up a position to take second in the teams’ championship after Lawson’s and Sargeant’s points over the weekend.

Formula 2 begins in 2023 in Bahrain on March 3. Pre-season testing is yet to be announced.

Next year’s Formula 2 season will have 14 race weekends, including an inaugural race in Melbourne at the end of March.