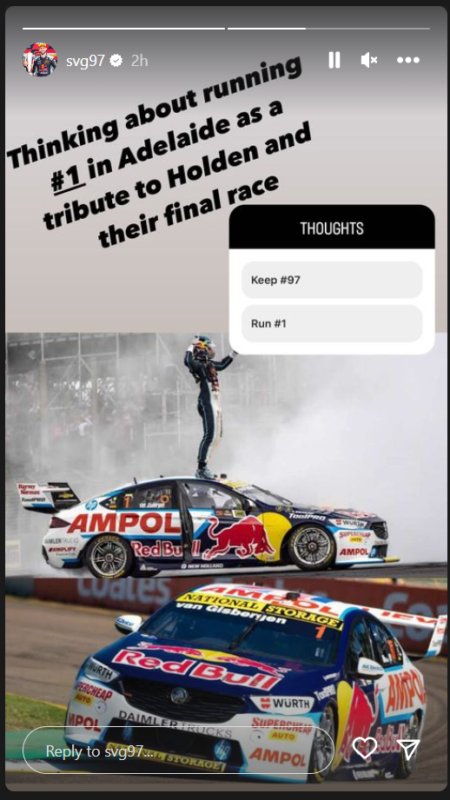 Shane van Gisbergen has floated the idea of switching his car to #1 for the Valo Adelaide 500 as a tribute to Holden in its final Repco Supercars Championship event.

The famous lion will finally bow out of the Australian Touring Car Championship next month, 62 years after 23 Holdens featured on the grid in the first ever running of the competition.

Fittingly, the farewell will take place at the Adelaide Parklands Circuit, around a kilometre from where the marque was born initially as a saddlery in 1856, and in the same city in which it made cars until October 20, 2017.

Van Gisbergen has a special place in Holden’s history, given he and Garth Tander shared the last Bathurst 1000 win for the Holden Racing Team, in 2020, and its last victory in the Great Race in general, last month.

The New Zealander has also delivered its last two drivers’ championships, but has thus far not taken up his right to race as Car #1 following such triumphs (including after his maiden title of 2016).

It would seem that a Holden could race in the ATCC with that symbol of supremacy one last time, based on an Instagram story which he posted late on Friday night (November 18).

Van Gisbergen wrote, “Thinking about running #1 in Adelaide as a tribute to Holden and their final race,” and included in it a poll simply entitled “Thoughts”, with the option for his followers to vote either for “Keep[ing] #97” or “Run[ning] #1.”

At time of writing, #1 was the clear front-runner, polling 81% after around two hours.

Intriguingly, the imagery in said story was two shots of his Red Bull Ampol Racing ZB Commodore, digitally altered such that it is Car #1 rather than #97, which suggests a level of commitment from the 33-year-old.

The change would be highly unusual, although seemingly feasible.

Rule E1 of the Supercars Operations Manual governs what are known officially as Competition Numbers, and Rule E1.4.1 specifically gives van Gisbergen the right at present, as the previous season’s drivers’ champion, to use #1.

Furthermore, one-off changes of car numbers are relatively commonplace, such as when van Gisbergen had Triple Eight Race Engineering switch his entry to #888 at last year’s Repco Bathurst 1000 in honour of outgoing Team Principal Roland Dane (noting that the team’s other full-time entry was in the somewhat unusual position of running #88 at the Great Race, in honour of Jamie Whincup in his last event as a full-time driver).

Both of his Bathurst 1000 victories thus far have come in Car #97, and it was after the latest of those that he revealed his then newfound appreciation for what Holden means to its fans.

Should he make the switch in Adelaide, it would be the first time a Supercar has raced as Car #1 in either the top tier or the Dunlop Super2 Series (which nowadays uses a separate number pool) since 2018, namely Whincup’s ZB Commodore of the day.

Not only has van Gisbergen wrapped up the drivers’ championship (unofficially, until the final event of the season is complete), Triple Eight has done likewise in the teams’ title race, and could also take this year’s Super2 title courtesy of Declan Fraser, who tops that competition at present.

Practice for both competitions’ Adelaide races starts on December 1.