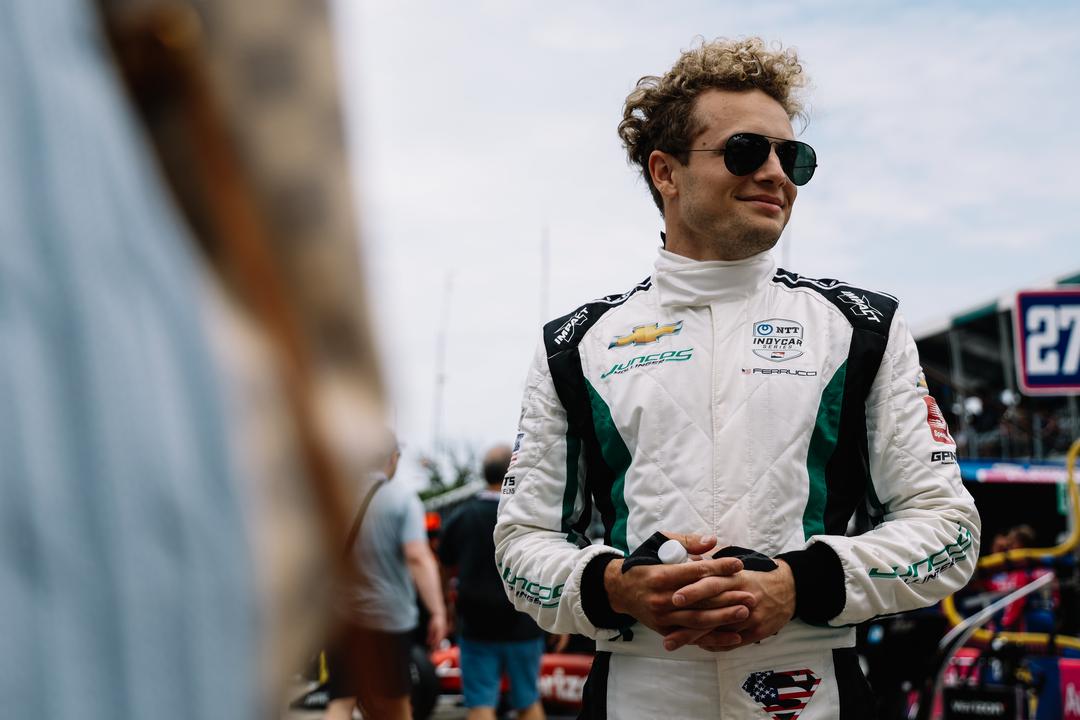 Santino Ferrucci will return to full-time IndyCar competition after signing a contract with AJ Foyt Racing.

The Connecticut native has become something of a journeyman, and regular hired gun, during his five seasons in IndyCar thus far, only two of which he has contested in their entirety.

That is set to become three from six by the end of 2023, with Ferrucci to strap into the #14 Chevrolet for the Foyts.

“It’s incredibly exciting to be back in the IndyCar Series full-time,” he said.

“Being a part-time driver over the last two years has been hard for me, personally. I’m a race car driver and I want to compete.

“Working with different teams has been exciting, and I’m proud that no matter which car I’ve raced, I’ve always shown speed and consistency.

“I couldn’t be more excited to join AJ Foyt Racing in the 14 Chevy. I can’t wait to make the best of it.”

Between his Indianapolis 500 campaign for Dreyer & Reinbold Racing; injury/concussion replacement roles for Rahal Letterman Lanigan Racing and Juncos Hollinger Racing (JHR); and a standby position for Team Penske after Josef Newgarden’s paddock collapse, Ferrucci was engaged to four teams last year alone, although he drove for only three of them in the end.

However, he did score ninth at Texas while filling in for Jack Harvey at very short notice and finished 10th at The Brickyard.

At AJ Foyt, the 24-year-old will join rookie Benjamin Pedersen next year.

Team President Larry Foyt said, “I am thrilled to welcome Santino to the team.

“He’s shown a knack for getting towards the front of the field, and I think he is a racer who moves forward on race day.

“AJ sees the fire in him and has enjoyed their meetings together.

“I think Santino’s experience will help his rookie team-mate as well, so he is a great addition to our roster.”

Ferrucci’s resume also includes several starts in the NASCAR Xfinity Series and even the 2021 Chili Bowl Midget Nationals, meaning he and AJ Foyt have something in common.

“It’s going to be a very unique opportunity to work with both AJ and Larry closely to build a new programme,” he added.

“To race for a legend like AJ Foyt, it’s a dream come true.

“I like to think of myself as an ‘old school’ driver who likes loose race cars and gets behind the wheel of anything with four wheels and an engine.

“So, driving for a guy like AJ, knowing that he drove everything throughout his career, it’s going to be a chance of a lifetime for me.”

Ferrucci’s car will be based out of Waller, Texas and Pedersen’s out of Indianapolis.

There is no word yet on whether the former’s signing represents the completion of the team’s 2023 line-up, given it had been mulling over running three cars.

He is, however, the 24th full-time driver to be signed up with steerers for at least two more seats in the field to be locked in, at JHR and Dale Coyne Racing.