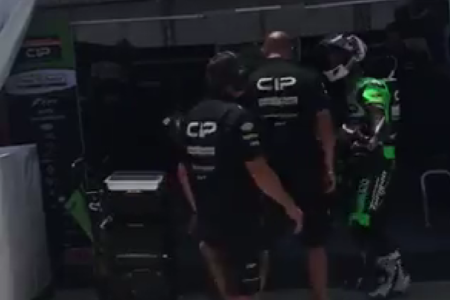 The Moto3 crew member who assaulted a rider at the 2019 Thailand Grand Prix has been sacked by his current team.

The termination was announced via a statement from the FIM, IRTA, and Dorna Sports, following the surfacing of footage of the incident during the just-completed 2022 Thailand event.

The video shows a CIP crew member kicking Tom Booth-Amos after tempers frayed over a malfunctioning bike, and apparently also striking him with a hand/arm as they walked back into their paddock marquee.

According to the FIM/IRTA/Dorna statement, the offending individual is currently working in Moto3 but for a different team, which is said to have been unaware of the incident.

Said statement began, “The video of this incident was widely shared on social media and the actions of the team member in question raised immediate and serious concerns.

“The FIM, IRTA and Dorna Sports strongly condemn this behaviour.

“Furthermore, it was learned that the person in question continues to work in the paddock and is now employed by a different team, which was unaware of this incident.

“The team has decided to terminate the employment of this staff member, who will not be returning to work for them after the Malaysian Grand Prix.

“The FIM, alongside IRTA and Dorna Sports, considers this to be the correct decision and fully supports the action taken by the team in terminating this person’s contract.

“Abusive behaviour must not and will not be tolerated.

“All parties will continue to work to make the MotoGP Paddock the safest possible working environment.”

Which team the crew member in question now works for is not specified, but is reportedly the Max Racing Team.

If that is indeed the case, then the Max Biaggi-owned squad will have dismissed three crew members in a matter of weeks, following an incident in pit lane in Aragon last month.

Then, two crew members attempted to block a rival rider from exiting his box during a qualifying session, with the ‘premature conclusion’ of their ‘collaboration’ announced just ahead of the Thailand Moto3 race.

That event was the second of the ongoing Asia-Pacific flyaway phase of the season which concludes with the Malaysian Grand Prix, before the field returns to Europe for the final round of the year in Valencia.