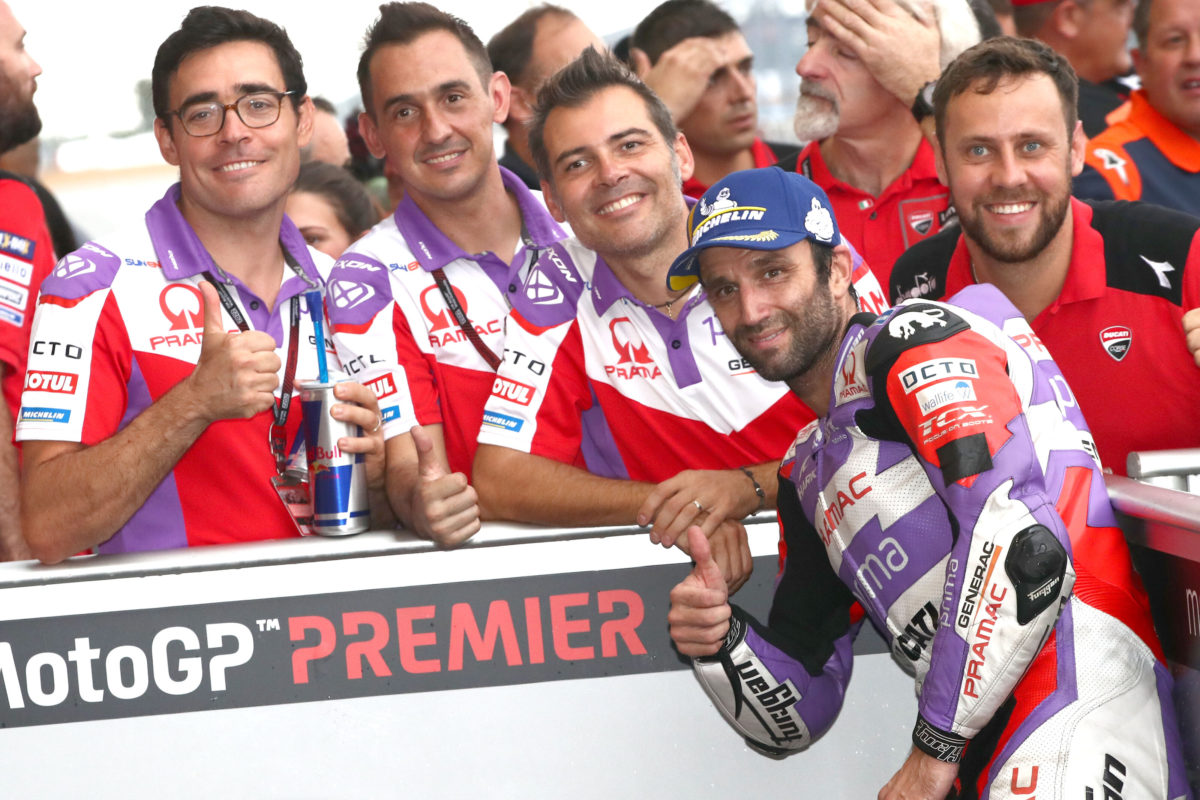 Johann Zarco has confirmed that Ducati’s riders have been told to help Francesco Bagnaia in his MotoGP title bid after finishing one position behind the Italian in Thailand.

Zarco, who rides for Pramac Racing but is directly contracted to the manufacturer, finished fourth in a rain-hit Buriram race after tailing ‘Pecco’ during the closing stages.

He picked off Marc Marquez and then ranged up to the back of Bagnaia’s Desmosedici after lapping at least half a second faster than anyone else at one point of the contest, but never made the pass for third.

There had been tension in the Ducati ranks after future factory team rider Enea Bastianini nearly crashed his Gresini Racing entry while battle Bagnaia for the lead three races ago at Misano, a spill which would likely have cost both victory.

While the Bologna marque has given mixed signals on team orders, and Bastianini passed Bagnaia for the lead on the final lap of the Aragon Grand Prix which immediately followed their San Marino stoush, Zarco has now clarified the situation.

“It’s clear. [I can be] Incisive on Marc, less incisive on Pecco,” he told Canal+, which broadcasts MotoGP in his native France.

“The track really dried out on the last five laps, the last four laps, and it was too late to think about winning.

“But still… The sooner I manage to pass Pecco, maybe I can try something and get away from [eventual winner Miguel] Oliveira.

“But as there was really only one line and when we got away the bike slipped, well it was still complicated.

“Two laps passed, and two laps before the end we saw that the victory was not there.

“So, it was good to play it smart. These are conditions in which I am aiming for victory, because I am comfortable in these conditions.

“I was hoping that it would dry out a bit earlier, because at the beginning with a lot of water it was very complicated, you can’t see the rider in front, and so even if you brake late… maybe you can get through, but you don’t want to make a disaster either.

“And that’s what was tricky in combat. It was a good weekend and a good race, because fourth place in conditions like this is long, it’s hard, but it’s nice to finish with points, a good place and almost a podium… let’s say [I] left to Pecco.”

However, Ducati’s main man held the live championship lead by the same, two-point margin for four laps before being passed for second position by team-mate Jack Miller on Lap 3, and it was the latter who took the chequered flag in second.

The difference, Zarco explained, is that they are still allowed to pursue podiums and wins for themselves, but he did not want to take the risk of straying off a dry line to try and make the pass.

“Since Misano we have some race instructions, difficult to apply when we are not fighting with Pecco, and until now it was not the case,” added the two-time Moto2 champion.

“But today it was the case, and for a victory Ducati doesn’t block anything; for places other than podium, yes, we give the advantage to Pecco.

“But here, in these conditions, it was the victory we had to aim for. Fourth is very good.”

Ducati Corse General Manager Gigi Dall’Igna is said to have appreciated the gesture.

“The championship is missing, I’ve already missed too many races [to score points], and how can I say… Gigi was very emotional,” remarked Zarco.

“To have left the podium, he thought it was very gentlemanly of me.

“But we saw that I was at ease behind, but as soon as we left this [racing] line it became risky and it would have been a shame to make a big mistake.

“So that’s it. I was clearly well received by Ducati, they said a big thank you.”

Zarco is now seventh in the championship, making him the fourth-ranked Ducati rider given Bagnaia holds second, Bastianini fourth, and Miller fifth.