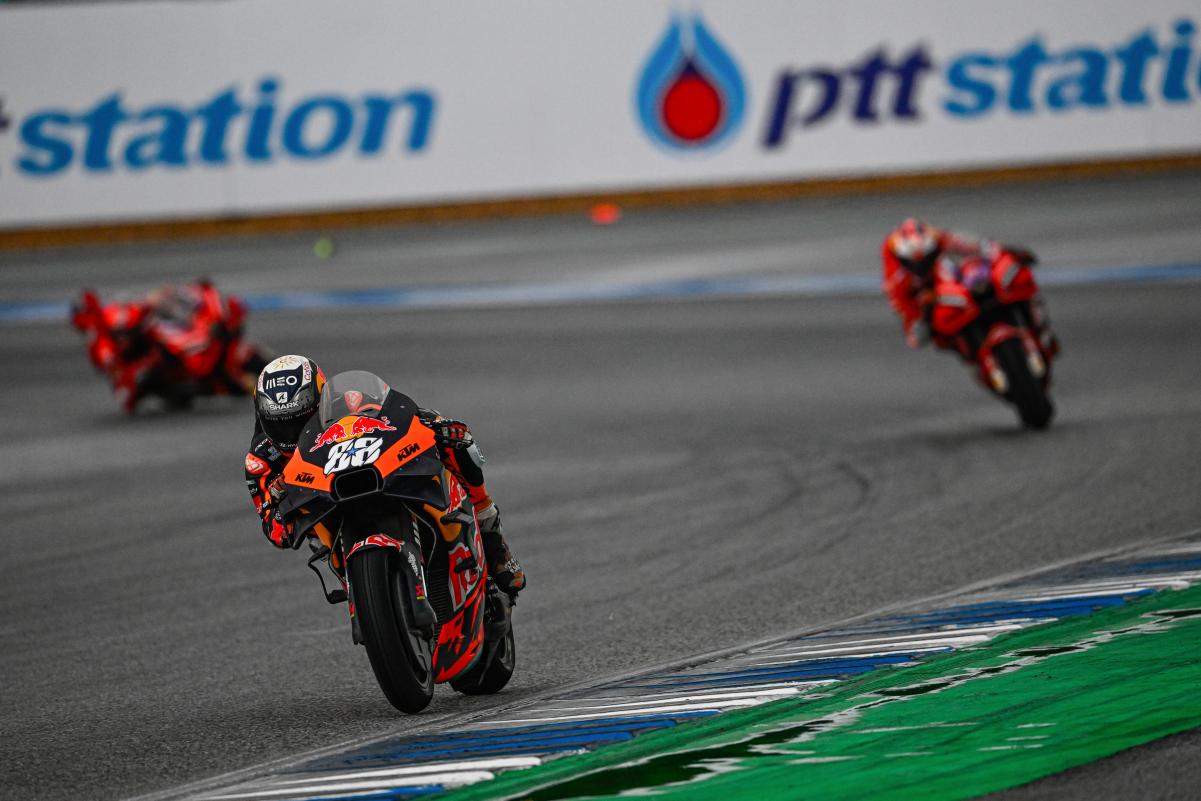 Bagnaia joined Oliveira and Miller on the podium while Quartararo failed to finish in the top 15, meaning the gap between the two is now just two points with three races to go.

After a delay of almost an hour due to a massive downpour at Buriram, a slightly shortened, 25-lap race got underway with Marco Bezzecchi (Mooney VR46 Ducati) on pole position.

He and Jorge Martin (Prima Pramac Ducati) ran well wide at the first corner but the former emerged with the lead, ahead of Bagnaia and Miller on the Ducati Lenovo Team bikes.

Quartararo, however, had already dropped to the back of the top 10 as a result of being held wide at Turn 1, and the Monster Energy Yamaha rider plummeted to 17th when he had a big moment on the slippery painted run-off at Turn 4.

Miller passed Bagnaia for second on Lap 3 at Turn 3, and was first exactly a lap later when Bezzecchi had to drop a position as punishment for breaching track limits at the first corner of the contest and not slowing sufficiently.

Oliveira was on a charge, passing Bagnaia for third on Lap 5 and then bringing the Italian with him when he went under Bezzecchi next time around at Turn 3.

He quickly caught up to Miller and made one unsuccessful attempt at an overtake at Turn 12 on Lap 8, before pulling off the pass at the same spot, six laps later.

The Portuguese rider got as much as just over a second clear of Miller, before the Queenslander caught up on the final lap, but he could not get quite close enough to pass and 0.730s separated them at the stripe.

Meanwhile, Johann Zarco (Prima Pramac Ducati) was on an even bigger charge than Oliveira had been as the track dried out, passing Marc Marquez (Repsol Honda) for fourth on Lap 21 and then threatening Bagnaia.

However, he stayed behind his Ducati stablemate and ultimately had to keep Marquez at bay to secure fourth.

Aleix Espargaro (Aprilia Racing) only qualified 13th but got up to 10th before having to serve a long lap penalty for an early hit with Binder, which dropped him to 14th.

He got back to 11th at the finish and is now 20 points behind Quartararo after the Frenchman never recovered from his opening lap dramas, running as low as 19th before taking the chequered flag in 17th and thus failing to score.

Bastianini and Miller retain fourth and fifth in the standings respectively, but are now 39 and 40 points behind Quartararo.

Bezzecchi slipped to 16th at the end and VR46 team-mate Luca Marini crashed while running fifth but remounted to finish two laps down in 23rd, meaning Remy Gardner (Tech3 KTM) was the only DNF at Buriram after also hitting the deck in a separate incident.

Round 18, the Australian Grand Prix, takes place at Phillip Island on October 14-16.