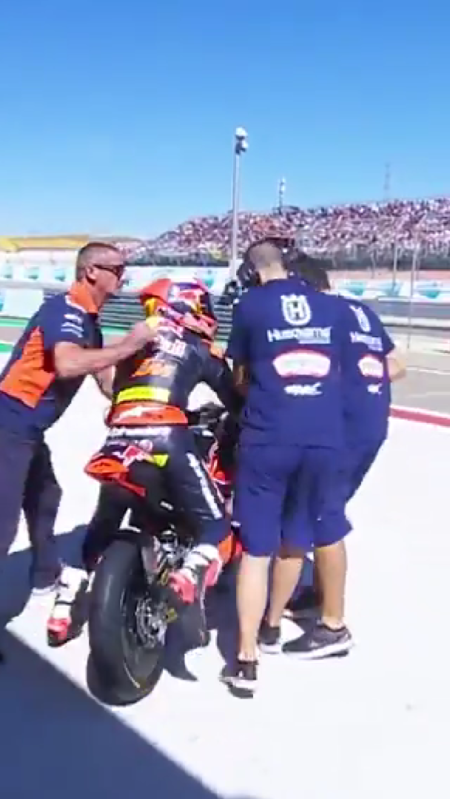 The incident in pit lane at Aragon. Picture: MotoGP Twitter

The two Moto3 crew members who were banned after blocking a rival rider in pit lane at Aragon have now been dismissed by the Max Racing Team.

The individuals in question had been hit with a two-round suspension by FIM MotoGP stewards, and fined EUR 2000 each, as punishment for obstructing Tech3 KTM’s Adrian Fernandez as he attempted to exit his pit box during qualifying.

Team owner Max Biaggi vowed to come down even harder on them than stewards had, describing their behaviour as “far from the ethics of this sport and this team”.

Now the squad has advised that it has “concluded prematurely the collaboration between the individuals involved and our Team,” with Biaggi said to have dealt with the matter himself.

“I personally followed and coordinated the procedure of formal noticing to the two members of my team, responsible for the events against the rider Adrian Fernandez and Tech3 KTM,” the two-time Superbike world champion is quoted as saying via that statement.

“After officially asking the interested parties for clarifications and justifications for what happened, in compliance with the contractual prescriptions, we arrived at the unpleasant, but necessary epilogue.

“As a team, we believe we must completely separate our road from those guilty of unsportsmanlike behaviour, as well as being against rules and regulations.

“Such an action cannot and must not remain unpunished, nor unnoticed. The damage to our name is immeasurable.”

Notably, the ban applied to the Australian and Malaysian Grands Prix which are about to take place, due to travel restrictions pertaining to, and hence safety concerns about sidelining them from, the Japanese and Thailand Grands Prix which immediately followed that of Aragon.

The Max Racing Team’s communication does not confirm that they did indeed attend the events at Motegi and Buriram but it was released shortly before race start at the latter, suggesting it was timed to essentially mark the conclusion of their tenure.

Coincidentally, the latest development in the aforementioned saga has arisen just as another behavioural controversy in Moto3 has erupted.

Dorna Sports, which owns MotoGP, has announced that an investigation is underway after footage emerged of then-CIP rider Tom Booth-Amos being assaulted by a crew member at the Thailand Grand Prix of 2019.

The Briton was kicked multiple times and struck in the team’s marquee after verbally venting his frustration about a malfunctioning bike, an incident which he claims he felt pressured to keep a secret until video of it was posted to social media during the 2022 event by another party.

On the race track, GasGas Aspar’s Izan Guevara extended his championship lead to 49 points after finishing fifth at Buriram in a race won by Leopard Racing’s Dennis Foggia, who has moved up to second in the standings.