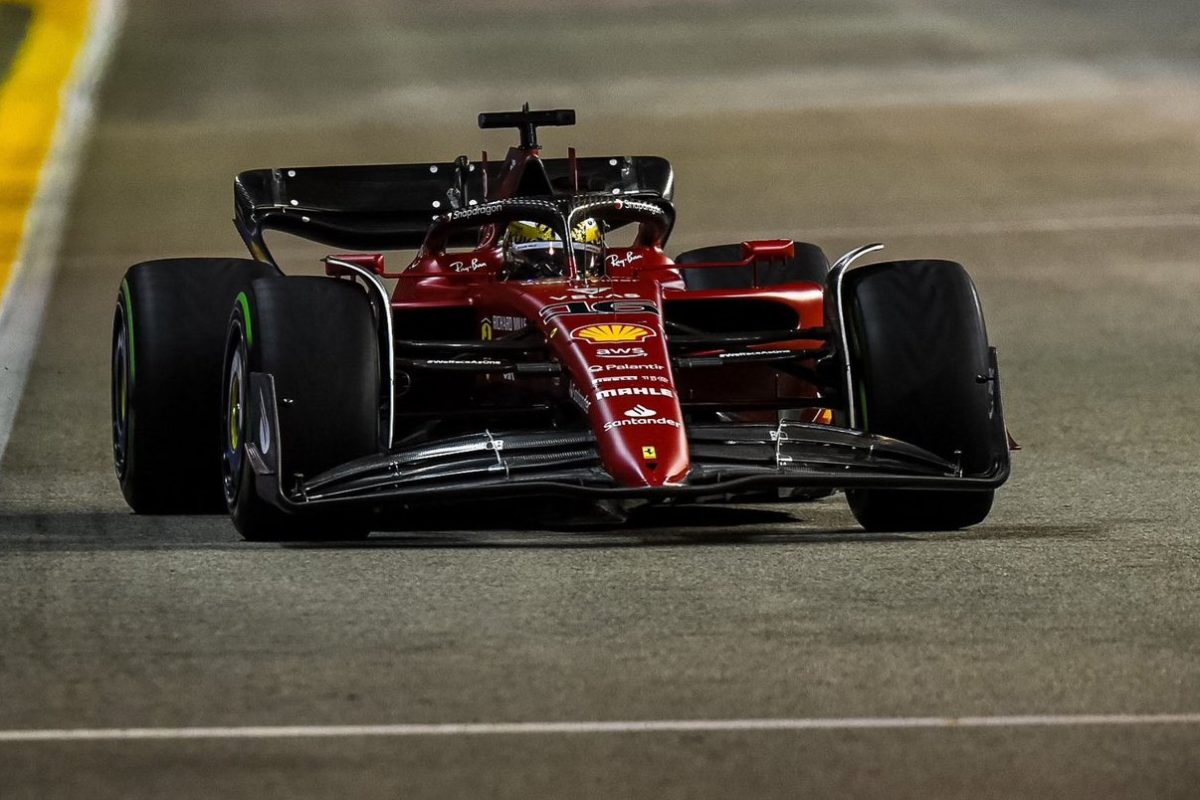 Charles Leclerc has secured pole position for the Formula 1 Singapore Grand Prix after a Qualifying session dominated by the conditions.

Leclerc mastered the slippery conditions to head Sergio Perez as the circuit transitioned from wet to dry over the course of the qualifying hour.

Max Verstappen twice abandoned laps in Qualifying 3 to end the session only eighth despite enjoying strong pace to that point.

As the session started, both George Russell and Lewis Hamilton headed out immediately on intermediate tyres.

While dry in places, the track remained too wet in others for slicks, making inters the prudent choice.

Slippery conditions prevailed, with Kevin Magnussen running off at  Turn 16, while Leclerc had an off at Turn 8.

Both were able to continue without damage, drawing nothing more than the yellow flags.

Alex Albon too had a moment, his at Turn 18; the left-hander prior to the track running under the grandstand.

Times were faster than were seen in Free Practice 3, though Leclerc’s best of 1:54.222s was still some 10s away from a dry time.

It left him 0.1s clear of Verstappen with four minutes remaining, a point at which neither Haas driver had recorded a representative time.

They both headed out in the final moments, Kevin Magnussen easily extricating himself from the danger zone, as did Mick Schumacher.

Leclerc and Verstappen were again the leading protagonists as Qualifying 2 commenced, the former heading proceedings with a 1:52.343s.

Intermediates were still the order of the day, with Lance Stroll the first to brave the switch to slicks with five minutes remaining in the segment.

The reality was, it was too early for slicks, with none of the trio who’d rolled the dice reaping a reward.

They were all among those bundled out, joined by George Russell and Schumacher.

Vettel’s exit was the result of a mistake at Memorial Corner, pinching a brake and skating wide to ruin his chances just half a lap in.

Qualifying 3 commenced with slicks the preferred tyre for the first time; only Magnussen and Yuki Tsunoda opted for intermediates, the balance of the remaining runners on the soft compound tyres.

The Scuderia AlphaTauri was on provisional pole his initial lap until Hamilton managed a 1:53.082s to go fastest by two seconds.

The order then changed rapidly, with Fernando Alonso, Leclerc, and then Hamilton again having a turn at the top.

Lando Norris also shot up the order, pushing Verstappen to sixth after his initial effort.

Another effort from Verstappen moved him up to second, though not without some wild slides as he encountered wet patches in the final third of the lap.

Leclerc rose to provisional pole with a minute remaining, though Verstappen was behind him on track going faster still only for the Dutchman to abort the lap. That became fifth as Sainz crossed the line.

Hamilton was also on a strong lap, the Mercedes driver rising to third, however, Verstappen had crossed the line with enough time to set another lap.

Down at the first split, he set a personal best at the second, but another scrappy final sector saw him abandon that lap, too.

It left him only eighth on the grid, with Leclerc on pole from Perez, Hamilton, and Sainz.

Then came Alonso, Norris, Gasly, Verstappen, Magnussen, and Tsunoda to complete the top 10.

The result is Leclerc’s second pole in succession and ninth of the season.

With Verstappen set to start down the order, and Marina Bay notoriously difficult for overtaking, it is now unlikely the Red Bull will seal the title tomorrow.