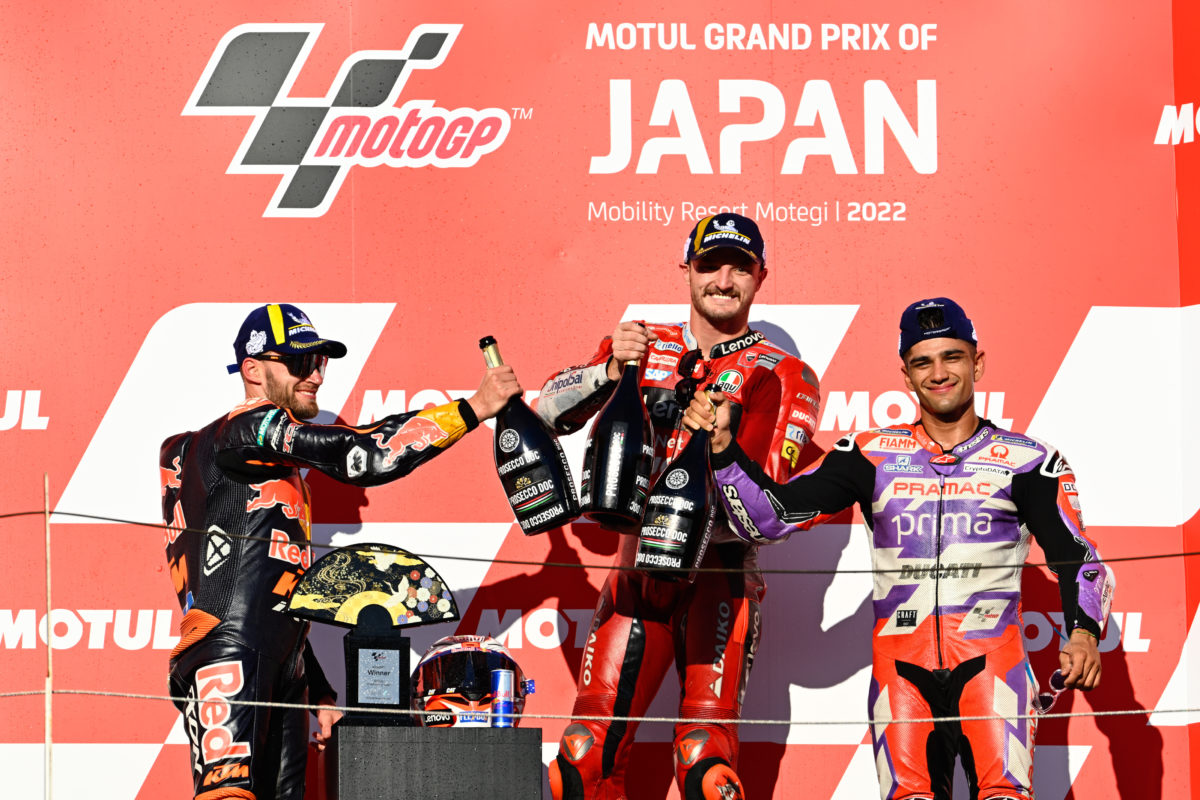 KTM chief Francesco Guidotti believes the input of Jack Miller and Pol Espargaro will be valuable when they arrive from other manufacturers at the end of the current MotoGP season.

Miller is joining Red Bull KTM Factory Racing after five years with Ducati, including two at its factory team, having begun his premier class career on Hondas.

Furthermore, Pol Espargaro returns to the KTM ranks to ride for GasGas Factory Racing, which will continue to field RC16s despite dropping its ‘Tech3 KTM Factory Racing’ branding, after two years away at the Repsol Honda Team.

Miller will share a garage with incumbent Brad Binder, while Espargaro’s team-mate will be current Moto2 championship leader Augusto Fernandez, making for a breadth of experience in the wider KTM/GasGas stable.

By way of comparison, Red Bull KTM had fielded Binder and another established RC16 rider in Miguel Oliveira, while Tech3 was comprised of rookies Remy Gardner and Raul Fernandez this year.

KTM is attempting to recover after two sluggish seasons, and Team Manager Francesco Guidotti believes the knowledge which the new/returning riders bring will be a boon for the operation.

“From a growth perspective, this has been a somewhat particular year,” Guidotti, himself not quite a year into his tenure after running Ducati satellite team Pramac Racing, told Italian outlet GPOne.com.

“Having four riders who only had experience in MotoGP on our bike can be a limitation.

“We had to look around to put together a more varied line-up: Binder is the cornerstone of the team, for Miller KTM will be the third MotoGP bike he will ride, Pol will return with two years’ experience on another bike, while Augusto will be able to enjoy his debut season without pressure and we will try to make him grow without haste.”

According to Guidotti, KTM has suffered since 2020 because of the nature of the heavily COVID-disrupted season, and the fact its success then meant it lost the development concessions which it could exploit then.

“We have to realise that this is still a very young project compared to those of the competition,” he said.

“It is clear that 2020 was a particular season in many different respects and KTM was good at playing its cards by taking advantage of the opportunity to test in various circuits before the races, being still under concessions.

“In addition, there were tyres that favoured performance in those circumstances – I am referring above all to the front end – and now they are gone,” added Guidotti.

“Also, being a very young project, there were people involved who, if you allow me the term, were rookies and losing the concessions for them was a big blow.

“Reorganising and resetting the whole test program was probably one of the causes of losing the plot.”

Binder finished second last time out at Motegi to none other than Miller, who was in his fifth-last round for the Ducati Lenovo Team.

The South African runner-up says his was a “desperately” needed podium, and put his performance down to a tweak which enhanced his straight-line braking.

“To be honest, it’s more just confidence with the front,” he explained post-race.

“One big issue we have is a lot of locking up straight braking, but they did something to give me a little bit more confidence in this area, or to understand better before it starts to lock a lot.

“So, more than anything, they gave me confidence, and that helps a lot.”

New riders will not be the only external knowledge arriving at KTM/GasGas, with Miller’s crew chief, Cristhian Pupulin, set to follow him from Ducati.

Alberto Giribuola, the current crew chief of Miller’s replacement at the Bologna marque in Enea Bastianini, is also poised to move across.

As far as the 2022 season is concerned, Marc Marquez (Repsol Honda) has just set the pace in Free Practice 1 for the Thailand Grand Prix despite an early crash at Turn 3 of the Buriram circuit.

Miller was third-quickest at just 0.065s off the pace, with Oliveira being KTM’s best in seventh at 0.233s back from Marquez.